Better today, but what happened?

Janey is better today, thank goodness.  I don't know if we could have taken another day, although of course we would have, because we have no choice.  But it was a tough, tough, tough, tough couple of days.  Today there is some crying, but no-where near constant, and some long happy times in between.  Tony is actually able to watch the Patriots in relative peace while Janey watches a YouTube episode of Mickey Mouse Clubhouse.  I hope tomorrow is okay at school.  If she had still been like she was yesterday, I would have kept her home, although I'm sure people at school would have said I should send her, but I can't.  It would be like sending a very sick child to school, although the acute illness was mental, not physical.  But today she is mostly just Janey, never easy but her regular self.

So what happened?  Who knows?  The theories people have told me through comments are great.  I love getting ideas like that.  I think the biggest contenders are 1---a cognitive jump that resulted in some brain jumblings and anxiety  2---a low level illness of some kind that she couldn't explain to us, and that didn't have enough obvious outside symptoms for us to see  3---too much chocolate at some point, or other food with caffeine.  Maybe she snuck coffee at home or school  4---something small setting her off to start with, and then the crying feeding on itself, and just not being able to get stopped by her.

And what made it better?  Again, who knows?  Today Tony took her out a few times, which we did yesterday too, but also it was warm enough today so she could run around some in the driveway.  She need that time outside, more than most anyone I know.  He took her to the grocery store and let her pick out what she wanted to eat, which was pistachio nuts.  It seemed like after she ate a bunch of those, things turned around.  I looked them up and saw they have lots of B6, copper and manganese, whatever that is, so maybe she needed those nutrients and somehow knew what to pick.  Maybe her mind finished processing whatever was bothering it.  A bit ago, she said "I'm still happy when I'm crying"  We think that's a quote from Yo Gabba Gabba somehow, but she uses quotes to say what she wants, sometimes, and maybe she was trying to tell us she needed the crying for some reason.  Again, probably not, but you just don't know with her.

Janey grabbed my camera again today, and when I went to check my pictures, I found a few surprise self-portraits!  The first picture is one of those, and the second is one I took of her just now, watching her show and pulling at her eye---two of her favorite activities. 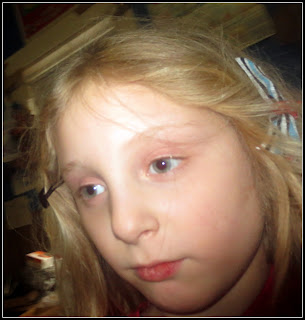 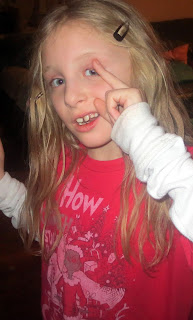 The Grinch shirt is my little piece of Bad Autism Mother dressing.  She was being grinch-like, so I put on her grinch shirt.  Hey, I'm not saint.  Let's hope tomorrow she can wear a cheery, sparkly, happy shirt.  Please!
Posted by Suzanne at 5:48 PM

I feel like I've mentioned this before, but if I have I'll say it again: Janey is such a pretty girl! I'm glad her crying has subsided; maybe those pistachio nuts did have something to do with it? It's an interesting consideration at least. But you never know, really.

Wishing all of you a good week! :)

Suzanne, I'm so happy that things turned around today for you! Poor thing, she was probably pretty sad…but look at her now :) Maybe you all should consider getting her an inexpensive camera - it could be a lovely hobby for her!

BTW, I know this is a little late, but here on the west coast, we are having awful bouts of flu and norovirus (stomach cramps, stomach flu). I think I suffered with something like this this weekend and it went away as fast as it came. But the pain was intense and would come and go…when it was gone, I had no clue my stomach was in a bad way. Maybe Janey had something like this too?

I'm so glad things are better today! I don't have any theories to add besides what you've already considered/ had suggested in the comments. I've been dying more than usual for the spring/ summer this winter because being outside makes a humongous difference for us as well - hope you're able to get outside more this week while it's not as cold here in the NE!

So sorry that you've been enduring such difficult times recently, but am happy that today may indicate that the worst is over. It is particularly frustrating when you do not know what is causing the distress, and why it stopped. Here's hoping that you all have a great week!

The pistachio's are interesting. I bet she did need something in them. The body can send off powerful signals.

The "I'm still happy when I'm crying" just floors me. Maybe it's just me, but I think that's amazingly thought provoking that Janey is quoting that when she is actually crying. Like you mentioned in another post, oh what I wouldn't give to be in Willow & Janey's mind's for a moment! Wouldn't that be something.

I love that Janey takes pictures! Willow does too. I wish I could post one to show you but I don't know how to do that :). They are mainly of her own feet ;). And I really think Janey & Willow could pull off sisters. I was staring at a picture I took of Willow the other day and thought that Janey & her look so much alike!

Willow also loves to watch her TV shows (Sesame Street, Sid the Science Kid & Mary Poppins, to be exact) and mess with her eyes! She doesn't pull on them as much as she pokes at them and covers them with the backs of her hands. Does Janey do that too? My husband's half sister said that eye poking is a result of high oxalates in the diet. She told us to put Willow on a low oxalate diet but really - the majority of what the kid eats are filled with oxalates & might I add very nutritious. I'm not about to remove 80% of her diet... I had never even heard of an oxalate previous. I suppose I would if I knew it would help, but I feel lost in a sea of "you must do this to help Willow" comments from everybody and their brother.

And I agree with Sabrina, Janey is such a pretty girl!

Im so glad shes feeling better, shes such a sweet looking kid and i find remarkable the way you and your family handle things. i cant help but wonder, how hard must this all be for this little girl? i like how she still tries to convey her message, even thou it must be horribly confusing. i still dont know how affected my daughter will be by her autism
but im learning alot of what might come my way in a couple of years and im glad i found this and On the train with sophie`s blog.

i hope everyone has a better day and a better week!
we just had Mothers Day here in the Dominican Republic so Happy Mothers Day to you all!!