Today was a show at Janey's school.  Her school emphasizes the arts, so they have a lot of shows, with lots of dancing and singing.  I love Janey getting to participate in these areas, but I have to admit, the shows are tough for me.  Although Janey can sing and dance, she certainly doesn't, on stage.  I've heard sometimes she does in rehersal, but once she's actually up there, the best I can hope for is her not crying or throwing a fit.  She didn't today---she stood there, with the help of her wonderful aide Ms.. Clemmons, next to her friend Jaden, and although she looked slightly dazed, she was up there with the rest.  Here is a picture of her.  She and Jaden are holding teddy bears.  It's a song where the other kids are doing hand movements, and I liked a lot that Janey had the bear to hold.  It made it a lot less obvious that she wasn't doing the movements along with the rest.  In this picture, it even looks like she's doing a half clap. 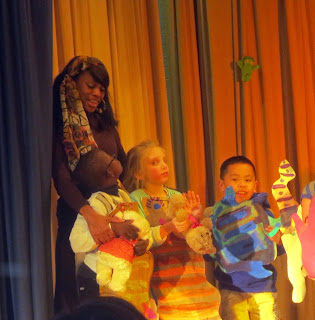 There are a lot of amazing kids in her class and school.  Of course, I count Janey as one of them.  But today I was thinking about the other side of inclusion---the kids without disabilities.  I truly feel they too benefit greatly from having Janey, and Jadon, and the other kids with disabilities around them, as much as Janey benefits from being around them, and maybe more.  And if I go to the shows, or to classroom events, and feel depressed Janey isn't doing what they can do, that's missing the point.  I am watching them learn, as I am watching Janey learn.  I want Janey to be in the real world, the world with kids that have all kinds of levels of achievement.  Freddy thrived in that world.  Although we didn't know it, we were preparing him for Janey, but besides that, he met some great kids.  Last night, he talked for a long time on the phone to a former classmate of his, a boy with what I would guess is high-functioning autism.  I said something to Freddy like I was proud he had kept in touch with that friend, and he said "Why wouldn't I?  He's very cool"  When an inclusion school works perfectly, which it doesn't always do, of course, it creates a community of parents that care for not only their own children but the children their kids go to school with.  I want to have a heart that can delight in the accomplishments of all the kids in Janey's class.  I'm not quite there yet.  It's hard.  The pictures below show what I mean, a little.  Janey is there.  She is part of it all, but she also isn't.  She can't be, totally.  I love it that she is included.  It means a huge amount to me.  I love the adults that find ways to include her.  I love it that her classroom teachers, when finding out I was going to the afternoon show and not the morning, knowing that Janey would not tolerate more than one show well in a day, played with her during the morning show instead of having her go on and not be up to the afternoon show.  That is the kind of adjustment, of caring and understanding Janey, that happens all day and allows her to be both herself, a child with low functioning autism, and also part of her class, a class of cool, smart, interesting kids.  And it's why I go to the shows---not so much for Janey, but for her class as a whole, the class she is part of. 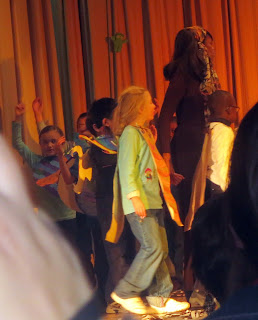 I want you to know that I now follow your blog religiously. I look for your posts every day. Thank you for sharing your thoughts, your life, your Janey. Thank you for being honest & not sugar coating things. It makes me feel not just a lot less alone, but in good company.

Thanks so much for saying that! It's wonderful to hear. Sometimes I wonder if I write too much or too often, if people are thinking "Geez, she's rambling on AGAIN?" and maybe some of them are, but it's great to know you look for the posts and like them!

im also a regular here, my daughter was diagnosed with autism shortly after her 1 year doctors appointment, altought sometimes i wonder if its too soon but then again i think not, shes 1 year and 4 months. im very very gratefull for your blog. it helps me understand things a bit better.

i felt really scared, i dont know anyone with an autistic child so i felt very on my own, just like Tea Mommy i feel not only not alone, but also in good company.