I broke down at Janey's meeting today. It was just a little parent teacher meeting, not an IEP meeting. I like her teachers a lot, but it's an integrated class, not an autism class, where she probably should be. She is not learning anything, and she is making no progress, I must admit. Although we have all tried to teach her colors, numbers, shapes, for years, she makes no progress. I wish I knew what she is capable of learning, so I would not hound her to learn things she just can't. I cried in front of them out of my frustration that other kids are given better services because their parents threaten the school district. I need to learn to do that. But first I must be sure what I want them to do, and I am not.

I am trying to remember to see Janey when she cries or is upset as a scared little 4 year old, in a world she doesn't understand well. It's ironic that when she needs me to see her that way, and when she IS that way more than most 4 year olds, it's harder for me to do that than if she were more able to talk. I talked and still do talk to the boys for hours about their fears and concerns,but with Janey, after an hour or so of crying I just want her to not cry any more. I love that little girl so much, and I feel like I am totally not up to this task.
Posted by Suzanne at 9:49 PM No comments:

I am thinking more and more that Janey has real word retrieval problems. I think it's why she can be very verbal in made up songs that go on and on, but when she has to find a specific word, it's very hard. For example, for days whenever she was asking me for something, she would call me Daddy..."I need a chocolate milk baba, Daddy!" when he was at work. I said I wanted to be called Mama and wouldn't give her things if I was called Daddy. She has solved that by asking for everything by saying Mama AND Daddy---"I want a juice box, Mama and Daddy"---as if it's just too hard to figure out who to ask so she will make us happy by covering both bases. It's almost painful to watch her find the words when she really wants something and can't use a set phrase to get it, like in the car when she wanted a specific talking toy and finally said "Need my froggie computer" in a slow, labored voice, to get her LeapPad toy. But the words are up there, and in songs or in lists she talks to herself they all come out easily. I can't understand it.

She is getting better at choices. I show her two choices, in either hand, and she will pick quickly and easily---for example, cookies or crackers, a doll or a cat. She KNOWS what she wants, but it's so hard for her to put into words. I tried yesterday making Yes and No cards, so she could pick the card. I asked her if she wanted chocolate in her milk and she picked the No card, although I know she wanted it. So I said "Okay, I won't put chocolate in" and that prompted her to actually say out loud "I want chocolate", so even if the cards didn't work as they should, they got her to talk.

She's a mystery that goes on and on.
Posted by Suzanne at 6:28 AM No comments:

No fun with stickers

I tried hard today to make a fun activity with Janey. I have lots of stickers, all different cool kinds, some that I have gotten at craft stores as parts of big grab bags, with special textures and so on. I took a big book, spiral bound, that I bought for us to color in, and tried playing stickers with Janey. I wasn't directing her---I let her do whatever she wanted with the stickers---but I put some in the book and talked about them. I thought it would be a vocabulary time and a sensory time and all kinds of good things. But like so many times with Janey, it turned instead into a crying time. I don't know why. It seems like she doesn't like to be focused on---she knew I was there to play with her, and that is too intrusive I guess. It's one of those days I feel at such a loss.

Last night seemed better. I was thinking how some parts about Janey are so easy. She loves good food. She was thrilled last night to eat lots of raw carrots and cucumbers, and homemade chicken soup. She is in no way a picky eager. She is also, knock on wood, a good sleeper. She is ready to sleep about 7:45 each night and sleeps until about 7:45 each morning. Some nights she does wake up, but usually it's not that hard to get her back down. She was doing some good talking last night too. She said "I will give Danny (the cat) a carrot". We said cats didn't like carrots much, and she said "It is NOT silly to give Danny a carrot!" although we hadn't used that word.

I feel so alone much of the time. In a world that's supposed to be filled with autistic kids, I feel like the only parent of one on earth lots of times.
Posted by Suzanne at 11:57 AM No comments:

I have sort of put my finger on what bothers me about people telling me to try ABA (or dairy free diets, or vitamins, or anything they tell me). If I tell someone that Janey is autistic, they can have know me 5 seconds and Janey just as long or not at all, and they are saying "How much ABA does she get? Is she getting ABA? What kind of program is she in at school? What diets have you tried?" And then feeling free to tell me EXACTLY what I need to do---"You have to force the schools to give her ABA---you have to try diets, you have to this and that..." JUST IMAGINE someone saying that about a "regular" kid---"You have to put her in dancing lessons, you have to send her to private school, you have to make her eat pumpkin every day, you have to teach her phonics...." It just wouldn't happen. Most of us allow others to make decisions about how to raise their own kids, or at least don't presume to know what is best for a child they don't know or barely know. I find it sort of biased to assume EVERY child with autism needs the exact same things.
Posted by Suzanne at 7:26 PM No comments: 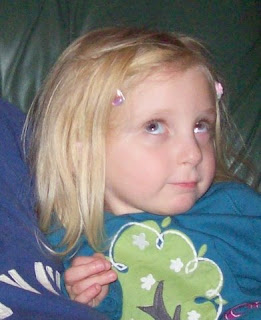 I was taking a bunch of pictures of Janey with Tony and caught this one of her doing one of her eye things---looking up and somewhat out of focus. She's not looking AT anything, just enjoying playing with her vision.
Posted by Suzanne at 7:23 PM 1 comment:

I have been upset lately by some of Janey's new habits. She is more and more into looking at lights, and getting totally caught up in them. A few days ago she came home from school and started playing with a toy she has that plays music and has lights that flash. She put her face right straight down on the lights so they were flashing in her eyes. I pulled her away but the minute I wasn't stopping her, she was back doing it. She is finding sunlight filtering in and playing in it with her hand forever if I don't stop her. It is scary to see---I always feel like she is slipping away from me, like she is falling off a cliff and I am holding onto her hand but losing grip. She is also calling people by wrong names more and more. It's like she knows people have names, but they are starting to be interchangable to her. I am called Daddy half the time, when Carrie was here she called her Nana, she calls her teachers whatever teacher name comes to mind.

I called the TILL autism support center today to see when there was a support group. I have resisted support groups with every ounce of my being, as I felt like I wasn't really in need of one, that Janey was different and I didn't need to talk to people with REALLY autistic kids. But I am being knocked out of that feeling. I do need to talk to them. There is one next week and I will go.

I have been very very depressed this last few days. Lots of things, but a lot of it is worry and fear and terror over what will happen with Janey.
Posted by Suzanne at 10:46 PM No comments: