Annual physical and a surprise sentence

Janey had her annual physical yesterday.  She's had a fairly healthy year, so we hadn't seen her pediatrician since last January.

The tough part of the visit was the wait.  We were in the waiting room for about 45 minutes.  That's quite unusual, but I guess they were very busy. In the past, this would have been a recipe for extreme disaster.  As it was, it was hard but not impossible.  Several times, Tony took Janey for a little walk, staying near enough so I could call him right back if we were called.  As the room cleared out, and we kept thinking surely we would be called any second, we stayed in the room and entertained Janey as best we could.  It struck me that although part of what's different than the past is that Janey has matured, part of it is that Tony and I just do what we have to do now, without caring how it looks.  For a long time, we sang and danced with her.  I sang Christmas songs, quietly but not silently, and I didn't care if people stared.  And people did stare---especially kids.  I don't like the stares, but they don't stop me any more.  I know Janey confuses kids sometimes. It's hard for them to figure her out.  I less like the stares of the parents.  I want to say to them "Have you never seen a child with disabilities before?  Is is really that shocking to you?  You know, she's a lot more interesting than your little snobby brats!"  Not nice thoughts, but when you've been trying to hold it all together for as long as that wait seemed, you get nasty sometimes in your mind. 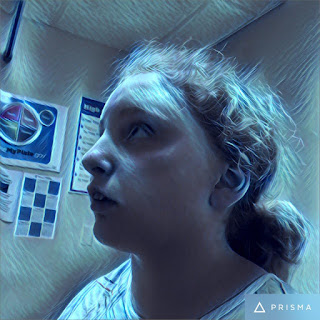 Once we got into a room, it was much easier.  We really like our pediatrician a lot.  I'm glad we made the change about a year ago.  The pediatrician that saw the boys was right for them, but I don't think he ever felt comfortable with Janey.  I am pretty sure he saw her as a tragedy.  That is not the attitude I want in someone treating her.  The new pediatrician seems to delight in her, while still understanding the challenges she presents.  She listens well, and she talks directly to Janey.  She did a good exam, and Janey looks healthy.  At the end of the appointment, Janey got a flu shot, which we were not sure how she'd take, but she took it extremely well---not a single protest or scream.  You never know with her.  Hopefully, she won't get the flu this winter as she did last winter.

After the shot, as we were putting on Janey's coat, she said, plain as day, "Can we go home now?"  Tony and I looked at each other in amazement.  That might not seem like a remarkable sentence, but it's the type that is extremely rare with Janey.  Her speech is rarely that direct.  The usual thing she'd say in that situation would be "Want to take the big girl for a car ride?"  or "Listen to music in the car?" or "Do you want salami?" or something else that means basically the same thing, but doesn't come out and say it.  A sentence like the one we heard, direct and grammatical and appropriate and succinct, is very, very unusual for her.  It was wonderful to hear.

In my never ending quest to help out when I see situations like the one you had in the waiting room - would it have been at all helpful, if I had been in that waiting room, to sing along? In my mind, I think it would be helpful to you as her parents, but would it upset Janey? I'm sure every situation is different. Maybe the right thing to do would be to ask the parents, a.k.a, in this particular incident, I could have said to you "is it okay if I sing along".

Good to hear she had a healthier year!

That's a very good and thoughtful question! The answer is...I'm not sure, in Janey's case! Usually, singing along is something she enjoys, but when she's a bit riled up and on the edge, as she was in the waiting room, it might not have worked out well. As a parent, I would have loved the question and the gesture, but I also might have been tense that Janey would get upset by the song somehow not being sung just right and that she might because of that lash out. The thing that I would have liked most for the other parents in the room to do is to catch my eye and smile, that smile that says something like "We've all been there!" That kind of sympathetic smile can mean the world to me in situations like that, because at least in my particular case, I'm always thinking of how other people might be feeling annoyed, and having them do something to let me know they are okay is very helpful. Thanks so much for asking about this!