The start of the next part

Since I last wrote, a big change took place in our lives.  Tony retired from work, 30 years to the day after starting federal employment.  He is 56, so this is a fairly early retirement.  Having him retire early was a huge decision, mostly for financial reasons, but it was the right decision, I am quite certain.

On the day Tony retired, a thought kept running through my head---"The hardest part is over now".  That's where the title of this post comes from.  Of course, I knocked on wood, and of course I know that there are still going to be many tough parts of life.  But from now on, there are two of us to care for Janey.

About a week after Tony retired, I looked at him and realized he truly looked about 10 years younger than he had for the past few years.  Mothers get all the glory and sympathy often in this special needs parenting game, but it's hard to overstate all Tony has done over the years.  Especially the past few years, he was working a job that was extremely stressful.  He woke very early every morning, helped me get Janey off to school, went to work all day, came home, took over with Janey usually, took her for car rides and made her supper, then had to go to bed when she did so he could get up and do it all over again.  He often went days without any time to himself, save maybe his time on the train.  He did all this while dealing with a serious health condition (severe type 2 diabetes---he's been insulin dependent for many years).  Tony's brother lives upstairs from us and is increasingly disabled from the complications of diabetes also, and Tony helps him a lot too.  When Janey didn't sleep, often Tony didn't sleep, and there were so many days I simply didn't even know how he got through the day.

Financially, retiring this early is not going to be a piece of cake, but that isn't something we find nearly as important as our health and happiness.  As long as we can eat, have health care and have a roof over our heads, the rest is gravy.

I've often thought of how in cartoons, characters run off cliffs, but keep going along just fine until they realize they have gone off the cliff.  That's how a lot of our life the past few years has felt.  Not everything is within the scope of what I write about here, but suffice to say we've been running on fumes a lot of the time.  Despite Janey being our joy, our delight, despite her being far happier than she was during some darker years for her, the demands of special needs parenting are always there.  That is something it can be hard to explain to those who haven't lived the life, and can be seen as a complaint, as something I shouldn't mention because I should only emphasize the joy.  But I want to speak the truth here, and the truth is that it's hard.  It's very hard.  It's very hard having a child that will never, ever care for herself, that needs supervision that realistically only we as parents can safely provide when she is not in school, 24 hour, 7 day a week supervision, and that this will be forever.  I know my dying thought will be of Janey, of her happiness and safety.

And so we start the next part.  The next part has been good, so far.  It's the little things that are the most surprisingly special.  On the 2nd day Tony was home, after Janey went to school, after a long night when she didn't sleep well, we went back to sleep after she got on the bus.  We slept in until 10.  We woke up astonished.  It was the first time ever we have slept in together.  Ever.  Last night, we stayed up to see our beloved Red Sox win the World Series.  We didn't have to think for one minute that we should be getting to sleep.  We knew we could rest a bit today.  Those kind of moments are worth the change in income.  They are the kind of special small things I think our new life will include a lot of.

And most importantly than anything, it's wonderful to see the joy having Tony home gives Janey.  Afternoons when she got off the bus were always a very tough time.  Now, Daddy greets her, and right away cooks her whatever she wants to eat.  Together, they blissfully eat things I wouldn't touch---fried eggplant, steamed greens, tuna salad---and Janey dances around with happiness.

Yesterday after school, Janey got off the bus cheerfully, and I was determined to keep her that way.  We snuggled, I gave her each snack she asked for, a shower when she requested one, and then I put on the shows she wanted.  And changed the shows when she changed her mind after a second or two.  And again.  And again. And again.  Then the phone rang, a doctor's office wanting to set up an appointment, so I couldn't instantly change the show.  I managed to get the call done over Janey's increasingly loud requests.  Then I said "What show do you now?"  I do freely admit my voice had a hint of annoyance in it.  I wasn't yelling, I wasn't openly angry sounding, I don't think, but I didn't sound patient.

That was enough for Janey to get furious.  She screamed, bit her arm and spilled a bottle of soda on the floor.  I made her help me clean it, and then put on the show she wanted, which she instantly turned off, glaring at me.

Then she said her favorite new phrase.  For background, I'll say that one day when she was very angry and lashing out, I told her she needed to tell me how she was feeling in words, and I gave her a lot of example phrases---"I'm angry at you, Mama!  You made me very mad!  I don't like what you did!  You aren't listening to me!"  And then, because she learns through hearing phrases and I don't want to censor her, I added "I hate you, Mama!" 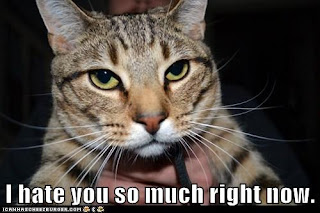 Well, she ignored all my other suggestions and went right for that last one.  Since then, she's been using it often.  Sunday night, she screamed it in fury so Tony could hear it a house away.  And yes, that is what she said yesterday.  "I HATE you, Mama!  I HATE YOU SO MUCH"

I was proud she added in that last part of the phrase herself, despite the sentiment.  I said "It's okay if you feel like you hate me right now.  I love you anyway.  Sometimes people do feel like they hate their mothers, and other times, they feel like they love them".  Just so she was clear where she stood at the moment, she said "feel like you HATE your mother!"

I have to admit---I kind of liked the idea that having an autistic, low verbal teenager might mean that I would escape some of the teenage drama.  It seemed like I had, at first.  But lately, I am reminded that in so many ways, Janey is like any other teenager.  She has times when I annoy her and anger her to the point she can barely take it.  I get that.  And I know how that might be even harder to deal with when you aren't able to fully communicate what you want all the time, and when you spend a lot more time with your mother than most girls your age.

We're seeing more signs of Janey growing up lately, and we are realizing more than ever how much she understands without being able to fully show her understanding.  In the last month, Tony and I have both noticed how much she monitors everything we say, especially actually when the conversation is not directed at her.  She is quite an eavesdropper.  We can be chatting away, and somehow say something about going someplace, and she is instantly next to us, saying "Shoes on!  Go for a car ride!"  Or we are talking about food, and she runs over and adds her two cents worth---"Go to the store.  I want salami"  or "Pizza!  I want pizza!"

It's hard, because much more than actual words, Janey picks up on tone and mood. Contrary to many beliefs about autism, Janey is better at sensing moods and tone of voice than anyone I know.  The slightest hint of argument or sadness or even when we take a serious tone in a conversation gets her very upset.  And the opposite works---if she's upset, we can sometimes make her happy by talking to each other in an upbeat way and laughing (but it has to be sincere laughter---she knows the difference)

It can be easy, even for parents like us with quite a few years now of autism parenting experience, to fall back on some of the silver lining thinking about autism, thinking things like "At least she's always be our little girl!  At least she's spared from adult worries!  At least she doesn't want to purposely make us upset!"  But thoughts like that aren't fair to Janey.  They make her less than---less than a full, complex person.  We need to always keep in mind Janey's age.  She is growing up.  She's going to be angry at us, sometimes.  She is growing in understanding, even if we don't always see the growth day by day.  We need to adjust our thinking, to treat her with respect, and yes, to teach her to treat others with respect.  It's not always going to be easy, but not much about this whole gig is. Nothing worth doing usually is.
Posted by Suzanne at 10:06 AM 1 comment: