Yesterday, when I was cleaning up a pile of clutter, I found an old calendar I had had made, one of those Shutterfly type things where you pick pictures of your family to use.  It was beat up, from having been lying around, but the pictures were still enough to prompt Tony to say something I don't think I've ever heard him say before---"What happened?"  He was looking at pictures of Janey (here's one) 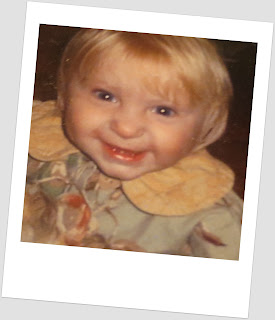 and seeing what we sometimes just can't look at, because it's so hard---how un-autistic she used to be.  We don't talk about her regression a lot.  It's far too hard to think about.  Sometimes it's easier just to pretend in our minds that Janey was always the way she was.  But she wasn't.  Until she was almost 3, she was not autistic.  Not at all.  She had a few oddities, she was very delayed physically, but you can look in those eyes and see---she wasn't autistic.  She talked far more than she does now.  She was a quirky talker---but she talked.  I sometimes have trouble even remembering or believing how she used to talk.  But I know by age 2 she was telling people they were her "best friend forever"---sometimes Freddy, sometimes my friend's daughter Julia, who she called Jua.  I know that just before we left for our cross-country trip, we visited my parents at a campground, and my mother commented on the chipmunks and the mockingbirds, and Janey said "I want to see the chipmonkeys and the knockingbirds!"  I know her doctor, at 18 months, said "Well, at least we know she's not autistic" when she spend all of her brother's appointment trying to get his attention.  I know the PT that worked with her from Early Intervention often said "I love seeing Janey and hearing what she has to say".  And then...it all went away.

Here's another picture from that calendar... 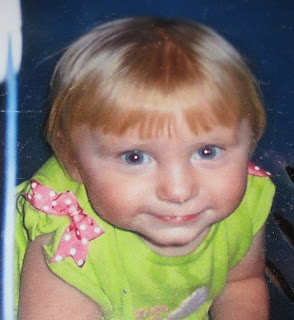 Those eyes that looked right at you---they are hard to see now.  What did happen?  We will never know, probably.  A couple months before her 3rd birthday, I remember distinctly the first moment of doubt.  We were at the science museum, with my friend I just mentioned, Maryellen.  Janey was talking to herself as she looked at a dinosaur.  She was being very self-absorbed, and I said something lightly like "she loves imaginative play like that!" and Maryellen said, hesitantly "I don't really think she's being imaginative".  That planted a seed, and I was watching Janey intently, and starting to see a few few odd signs---she was a little less engaged, she seemed to be talking a little less.  But it was nothing severe.  I asked another friend, who is a special ed teacher and who knew Janey well, if she thought Janey seemed like she could be on the spectrum.  She gave it good thought and said no, she really didn't think so.

And then the trip.  We drove cross-country---6 days out and 6 days back, staying out there for a week in between.  Janey left for that trip not autistic.  She came back autistic.  She turned 3 during the trip.  Whatever was waiting to happen to her brain happened then.  I don't think the trip caused her autism, but we wrack our brains to think if anything happened.  Did she somehow have a stroke from being in the car a lot?  She's had an MRI since then, and there were no signs of a stroke. We stopped often, but could that have happened?  Was she so tramautized by all the hotels and different houses it changed her somehow?  It hardly seems likely.  Was she too bored in the car?  Freddy sat next to her the whole way, and interacted with her constantly.  My best guess is what was going to happen had already started to happen, and the trip just somehow rushed it, or was coincidentally at the same time.

There are a few videos of Janey pre-autism.  I wish I could share them with you here, but I can't.  I can't watch them at all.  I tried, once.  I fell apart.  I screamed.  It was too hard.

I love the Janey I have, but I loved that other Janey too.  Of course she's the same person, but Tony's question, one we don't allow ourselves to ask often, is heartbreaking.  What did happen?

Here's one last picture of Janey from the calendar, before I put it away and not look at it for a while. 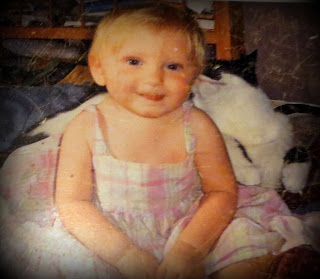 I know exactly, exactly what you mean :( Sophie's regression is still relatively recent and I find myself going, "a year ago she wasn't autistic". I still have envelopes from picture developing shops which I cannot sort through and put into an album. After we realized she was autistic I had to dump my phone pics into the computer- I couldn't bring myself to do it for months until my phone was so full it would freeze up with every operation. I miss hearing her voice too. Her "new" voice is rough, guttural. It is not the sweet toddler girl voice you would expect. We love her to death of course. But what the hell happened indeed.

I have to admit...this was tough for me to read. Not because of Lindsey. She was autistic from day one. Jacob...my fear for him will never go away. Everyday I worry. My heart goes out to you. I wish I could make it better for you. We just have to keep going forward.

On a lighter note, I really think we have a distant relative somewhere. I'm going to send you a baby picture of Lindsey. She could be Janey's sister.

Please don't do this to yourself. I understand, and completely relate. Just please try not to go down this path right now. I have tears in my eyes for you and wish I could hug you. Unfortunately I can't pinpoint a moment where Willow "became" autistic. I honestly believe in my family's case it's all speculation. My husband (who has been a FT SAHD since Willow's birth) insists she was since birth (even though we were completely in denial about it until right before her diagnoses, and still somehow on some level are). I can relate to the overwhelming feeling of needing to know. So many nights I've not been able to sleep wondering "was it the time I ate fresh mozz cheese? or the ONE time I took the prescription that my doctor told me was safe for pregnancy when I had a horrible migraine? or was it the decaf tea I drank??? Or was it because of the time I got horribly sick & couldn't stop vomiting? Or the fact that I didn't nurse as long as I wanted to? Or has giving her casein & gluten made it worse? Could TV have jump-started it? Is it because of my thyroid condition? Or my FMS? Or was it all the fear I had for my unborn child when I was carrying her that did it? Sounds silly to look at in writing but it couldn't be less true, that I have wondered these things more times than I can count. I understand the overwhelming desire to know why or how but sometimes for the sake of our sanity, we just have to let that go, even if it is just for a short period of time.

@mknecht24-
I couldn't help but read your comment about Lindsey & Jacob. Is Jacob a little brother? My daughter has a younger brother (9 months old) and I worry about him every day as well. Don't know if that's what you are referring to or something completely different. Best to you and your family on your journey :)

@Tea Mommy Our 15 yo daughter is NT. Our Lindsey is 13 and ASD. Jacob is 3 and NT and probably the least autistic person in our house. lol I still worry every day about him. We waited 10 years to have a third child because Lindsey's autism has significantly impaired her. I didn't want another child to go through that.

I know how you feel. I don't think now about how Olivia was - it's too painful. When I was told she could have Autism, I spent months looking and looking through videos to try to see when the exact moment was that she changed. I think I see it. Her eyes became less engaged. A little more empty. I now just kid myself that maybe this is how she came into the world, but I know she didn't. She was a bright and happy baby. I think it was the shots she got at 11 months. I think it tipped her over the edge. I beat myself up for a very long time. I am so sorry you went through this too. It's so hard.

Most of the time I do pretty well with not beating myself up over what it was that made Janey autistic. I might be "lucky" in that way that she was so late in regressing. It wasn't near the time of any major shots, so I didn't have that thought. But all the things you all mention---Tea Mommy, you've read my mind!---have been in my mind at one time or another. I've done just what you said, Sakurafleur---looked through all the pictures to try to pinpoint the moment the eyes changed. It's a very heart-wrenching thing to do. I am very lucky that Janey was absolutely our last child. I can imagine how you feel with Jacob, Michelle! I would be exactly the same, although he does absolutely sound like a poster child for not being autistic! But I know that doesn't change the fears. So good to have all of you to talk to.

We are going through this with my girl right now, she's young, 13 months. But, what you describe sounds a lot like Retts Syndrome. I don't know if you've had Janey tested. We are going to get my Mena tested next month. I Just think your story sounds like so many women who parent Retts girls, who have helped me. <3