It's all about Daddy right now

Lately, Janey has been going through an "it's all about Daddy" stage.  It's a stage I think a lot of girls go through at about age 4, and as Janey is delayed with most things, it's about the time for it, I guess.  Tony is a wonderful father, and he and Janey have always had a special bond.  We say a lot that she's the most like him, in her basic personality, the part that is unaffected by autism.  She likes to be on the move at all times, she loves cooking and food, she is more athletic than the boys, she just clicks with him very well.  But she's taking it to a new level the last few weeks.  The few days that for some reason Daddy wasn't there when she got home from after-school, which he usually is, she fell apart.  It's hard with her, as she doesn't come out and say "I'm sad because Daddy isn't here", but she asks to do the things they do together, and when I can't do them, or can't do them the way Daddy does, she is heartbroken.  This morning, I felt like for one of the first times, she was understanding he was about to go to work, and she was not happy at all.  A hour or so after he left, she looked at me in tears and said "Daddy!  Have a great day!  Daddy!" which is what he said to her before he left.  I called him at work so he could say it to her again and remind her he'll be home tonight, which seemed to work. 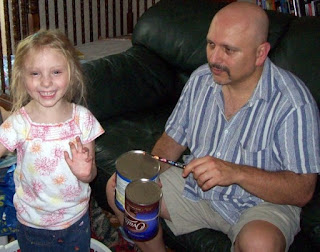 The picture is from a few years ago, but shows well the happiness Janey gets from the games that Daddy thinks up---this time, drumming with cans.

The hard part is when Tony has to be away.  It's hard for all of us, but it's especially hard for Janey.  His current job requires a week or so here and there of training around the country---last year it added up to 5 weeks, which was unusually much, but most years will require some time.  And generalizing more, it's hard for Janey when anyone isn't around that she expects to be around.  The other day, she rode along when we took her cousin Zeben back to the airport.  That was hard, but what was harder is that William got out with him to say goodbye and took the T home, so he wasn't in the car going home.  About half way home, Janey suddenly said "William back!" and started to cry.  I know she thought William had left, like Zeben leaves, and wouldn't be back for a while.  We try to explain, but that is a concept that's a big beyond her.  It must be a scary world to live in, without a mental clock or calendar in her head, or one that seems to work well.  People can just disappear, and although she sometimes knows when they will be back, if that schedule is even a little off, I think she feels very unsure if she'll ever see them again.

I'm very, lucky to have a husband like Tony, and the kids are lucky to have him as a father.  He loves Janey (and the boys) exactly as they are.  Her autism is something that he can, better than I can, look around and past, to just see the little girl he wanted so much, the girl that adores him and is his joy.  Here they are, running together, two of the loves of my life. 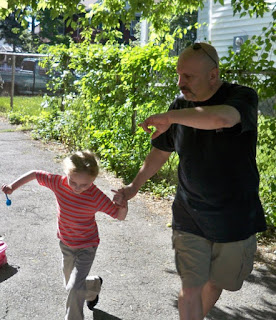 I love both photos of Janey and her dad! How precious. I adore her huge grin in the first one especially.

What you said about Janey not understanding and feeling like someone might not come back if they go away, that really hit me. Every kid goes through that (I know I did) but for a kid like Janey who really doesn't grasp the concept, she must feel like there are times when everyone she loves is leaving her and she has no idea when or if they'll be back. I can't even begin to imagine what that feels like! It's great that she does have a lot of constants in her life, and that you, Tony, and the boys are a part of that. You've really got a wonderful family. :)

It's hard on ANY girl who's dad has to leave sometimes. My dad was gone a ton while I was growing up because he was (is) a pilot.

Ciena used to sit in her room, looking out the window, or sit by the front door. She said she was waiting for her dad to get home. Me being me, I told her to play and that he wouldn't be home until after bed time (due to his old work schedule).

I love that Janey and Tony are so close! Lindsey is also a daddy's girl.

"Her autism is something that he can, better than I can, look around and past, to just see the little girl he wanted so much, the girl that adores him and is his joy."

This is so very much how I feel about my husband. I wish I was more like him. He takes everything in such stride while I'm a big crazy mess. And I love the picture! Look at that joyous smile of Janey's!