How Janey's brothers see her

Janey is extremely lucky to have two amazing brothers.  William is 10 years older than her, and Freddy is 7 years older (to the day!)  I often have thought how much harder our lives would be if Janey was our first or only child.  I can't tell you what a help the boys have been over the years.  Often it's just the little things, like when I have to run down and change laundry or check the mail---countless times, I've said "Can you keep an eye on Janey for a minute?" and they have stepped up to the plate.  As they've gotten older, if Tony and I want to get out and they are available, they are the only babysitters we use.  We do that very little, partly because they are busy and partly because we can't afford a lot of going out.  When we do have them babysit, we generally pay them, because watching her is certainly a payable job, but they often offer to watch her without pay for special occasions.  They joke with her, play with her, treat her in a brotherly way that is so important for her.  They are great boys.

Over the past few years, on several occasions, each boy has said the same thing to me separately.  They have both told me they truly feel Janey has normal or better intelligence---that for whatever reason, talking and communicating is hard for her, but that they very strongly feel that inside, she is bright.  I take their opinions on this very seriously.  They are not saying it from any position of wistful thinking or from lack of information.  They know Janey completely.  They see the full extent of what she is like---the screaming, the lack of academic progress, the limited talking---all of it.  But through it all, they see something else.  They have both seen amazing things she has done, those once a year type odd moments when she shows a glimpse of what she can do.  They have also seen the day to day demonstrations of her strong sides.  They have seen her learn songs instantly and sing them back, they have seen her figure out complex baffles we have put on things we don't want her to touch, they have watched her easily manipulate the computer and the TV.  And they also see the intangibles---just the way she can look at you, the way she picks up on the mood of a room, the way she subtly knows how to get what she needs from people.

I know a lot of people think I should have more faith that Janey is of normal intelligence.  I know very well that intelligence is not an easily measured thing, and that there are lots of kinds of intelligence, and that autistic kids don't take well to testing.  But I also fiercely need to live in reality.  Janey is nine.  She rarely talks in full sentences (except for echolalia).  She is not toilet trained.  She can write her first name, but nothing else consistently.  If she can read, she generally hides it well.  I have never seen her do even very basic math skills.  She rarely responds to questions.  By most any measure, she is intellectually disabled.  But IS she?  I don't know.  But I know that having her brothers feel she isn't is one of the factors I most strongly am influenced by.

Here's some pictures of Janey with her brothers, just being happy in their presence.  She's a lucky girl to have them, and I am a lucky mother to have all three. 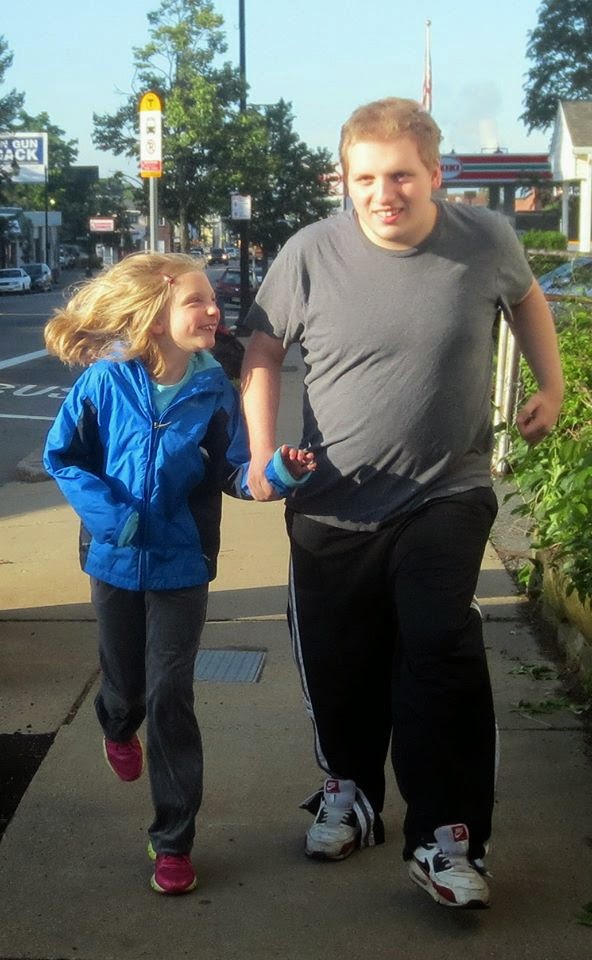 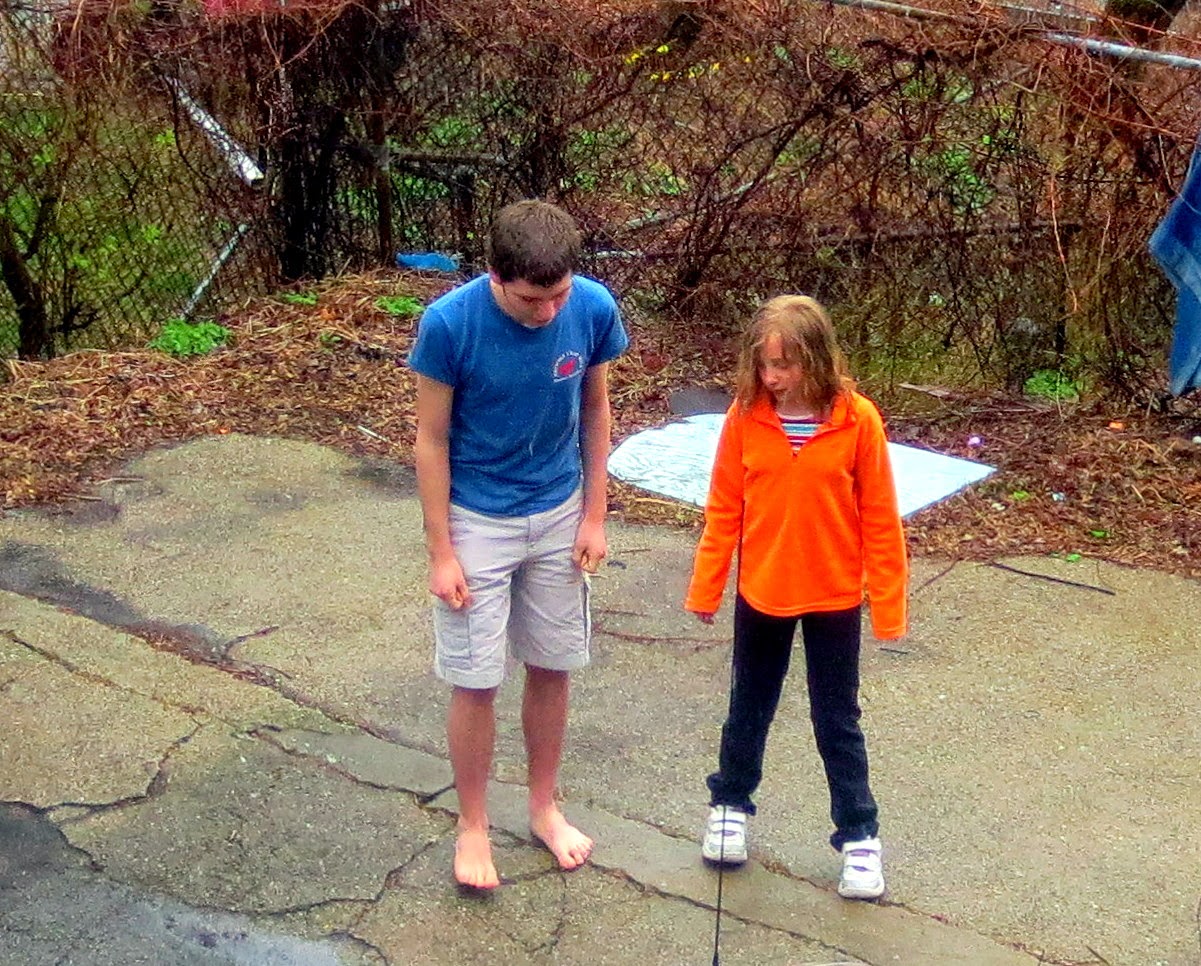 I hesitate to write this, because I know how annoying unsolicited advice can be, but ever since I saw your post on how Janie can read (in short spurts, I know) I thought "Take her to see SOMA!" She could very well be like Carly Fleishman or a Tito Mukhopadhyay. They both have petty serious autism, yet they can communicate. I think Carly was around 9 when her talents first emerged. (I'm not sure about that.) But consider reading Strange Son, or Carly's Voice and see if anything they say resonates with you.

Regarding Shanti's comment. I wonder if you read Emma's Hope Book? Emma's Mom did this and there HAS been an amazing breakthrough.
As for your kids, how lovely they all are. Besides Shawn, who I wrote about, who died at 18, I have a daughter two years older than he and a second son ten years younger, so almost the same distribution as yours. It ends up as if you are raising two families dorsn't it, even though not at first, before the big ones are teenagers.

It could be her brothers see a more positive side of Janey because they grew up with and it would difficult for them to picture her differently. My daughter has a little brother who is 18 younger than she is. So far, he sees his big sister as perfectly normal because she's the only other sibling around and they are in different classes in a daycare. The only thing that seems to bother him is the poop smearing which I'm glad he hasn't taken up from his sister. I'm convinced if we had a more typical first child we would have spotted trouble earlier but when you don't experience with kids there's nothing to compare to. People would just say stuff like "All kids do do that" or "It's normal for kids to be slow talkers. . ." I've never seen my daughter play with other kids but she does interact with her brother maybe because he's non-threatening and is shorter. I was amazed when she was running in the yard with some grapes taunting my son saying "You're not fast enough". At some point, I'm sure we are going to have to explain why his big sister is different but for now her hyperactivity and sense of mischief is in line with a two-year's tantrums and sense of humor.