So Christmas 2012 is almost over.  As is almost always the case on Christmas night, I feel a little let down.  There's such a buildup to Christmas, and it's over so fast.  But it was a very nice one.  We had a great day, and gave the kids more presents than we usually do---we are usually very restrained in that, but I decided this year to put more focus on getting them, especially the boys, things they wanted and needed.  It was fun.  We had a huge amount of special food, a great visit last night with our dear friends for Christmas eve, Janey and I had as much Christmas music all year as can be imagined, and overall, it was a very good Christmas. 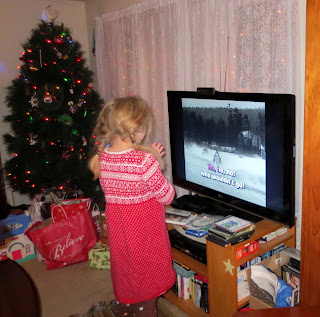 The picture is Janey watching the Christmas karaoke VHS we watch every year at our friend's house.  It's kind of a joke with the kids now, as it's very hokey, and has very cheap visuals, and does strange versions of each song, and then once they've done the long, long song, a screen comes up that says "Now everyone sing!" and we sing it all over again.  Lots and lots of laughs, but lots of fun singing together too.  Janey had been napping, and woke up when we were singing, and she was in heaven---it was her dream to wake up to a room of people belting out Christmas music!

Still, with all this being said, there is sadness for me at Christmas.  I don't think it will ever totally go away.  Janey has no real awareness of the holiday traditions.  She doesn't get Santa, she doesn't have any curiousity or interest in her presents, she can't count the days until Christmas, she isn't sad it's over because in most ways she didn't really understand it was here.  She was manic in the night, laughing hysterically for hours, probably because we weren't careful and forgot and let her have lots of chocolate milk, and chocolate and other caffeine is the one solid food connection I've ever found with her---it makes her crazy way out of proportion.  She cried at points today.  We were all exhausted by afternoon, but we couldn't nap, because she had to be watched.  She had pullup issues.  She was, basically, herself.  And she always will be.  She is delightful, sweet, interesting, but she is also autistic and intellectually disabled.  She is never going to get Christmas the way I dream of.  Like so many things, it's my dream, not hers.  It's my sadness, not hers.  But my latest way of thinking is to admit the sadness, and try to move on from it.  It makes me sad that she doesn't understand Christmas.  It makes me very sad.  But Christmas isn't her getting it.  Christmas is, in the words of the Grinch, a little bit more.
Posted by Suzanne at 6:21 PM

I've been feeling similarly about my son (who is much younger and with whom we've only recently started the diagnostic process but is definitely autistic) over the last day or two. It's really disheartening when you want to share the excitement with your child and they're not excited (whether or not it's because they aren't able to grasp what's going on).

It truly is disheartening. I was trying to figure out the last few days why it bothers me so much, more than a lot of other issues that I would think would bother me more. I think it's because Christmas and other similar holidays are like the payoff for parenting. They are set apart from the everyday, "need to do things right and in moderation" parenting grind. We want to give our kids a treat, a magical Christmas, to make them happy and to enjoy them, and when our kids just aren't into it, due to lack of understanding or being overwhelmed or whatever, it feels like a rejection, although I know it's not. Best wishes for getting through this season, and thinking of you as you start your exciting journey into the World of Autism (a little bit of gallows humor there, but I do mean it!)

"Like so many things, it's my dream, not hers. It's my sadness, not hers. But my latest way of thinking is to admit the sadness, and try to move on from it."

I so relate. I feel like you are in my head. I also saw those pictures of Janey. I feel like she looks remotely like my daughter too. Maybe that's what my daughter will look like in 5 or so years. Happy holidays & happy new year!