When people can't see the delight

Janey had a physical today.  I like my pediatrician a lot.  He has been very good to my family over the years.  He saw each child on the very day they were born, and it was exciting today to have him see William as an adult, ready to go to college---great to have him see how far William has come, and to have him see the fine young man Freddy is too.  But something bothered me a little about the visit.  I couldn't quite put my finger on it at first, but I think I have it now.  I don't think he can see the part of Janey that is a delight.

To be fair, Janey generally screams all through doctor's visits.  She is very healthy, so he rarely sees her except once a year, and at the time, we are usually seeking advice on serious matters, thinking about her future, worrying about things like her biting herself or if she will ever be toilet trained fully or what puberty will be like.  He doesn't often get to see Janey happy.  But today, although Janey did scream a fair amount, she also cheered up at one point and smiled at him so sweetly, and then suddenly went over to him and said his name "Dr. ------!"  Tony and I were excited.  And he was kind to her, but he didn't seem charmed.  When I talked to him alone, once Janey was out of the room, he was very serious, and talked about how we should start thinking about quality of life, and taking note of how it is every six months or so, and deciding if it's getting better or worse---what the trends are.  I know he worries about us.  He said as much, and I think I saw tears in his eyes.  He's a very kind person, and he cares for us.  And on paper, and from her brief visits, I can see there isn't a lot to delight in with Janey.  She is probably one of the most disabled patients he has.  She is also probably behaviorily one of the most difficult.  There have not been that many moments of triumph with her.  She hasn't made exciting huge jumps.  She is not a classic success story.

But she is so often, in so many ways, a delight.  And many people do see that.  Her teachers, her aides, the staff at the school, her brothers at times, Tony and myself often---most people who spend any amount of time with Janey have seen what a delight she can sometimes be.  Not always, not even mostly, but often.  She can make us happier than almost anyone when she is happy.  She is funny, she is spontaneous, she is often a blast in her own way.  She can make us despair, sure.  Often she does.  But sometimes she makes us laugh until we cry too.  After the appointment today, we went to get some food.  Tony took her to Burger King, and I went with the boys to a burrito place.  She came over with Tony afterward, and saw a big bunch of high chairs, and said "I want the high end chair!"  We laughed and said "You are too big for the high chair" and she said, for about 20 minutes "You're too big for the high end chair!", like she was discussing finer furniture.  She knew we found her funny, and she was playing it for laughs.  Both the boys were in, well, teenage moods, and it was one of those times that we appreciated what Janey is most.

I think there are some people that, although they might care very much for Janey, that they may want the best for her, can't completely get past the part of her life that is a tragedy.  And it partly is.  She has made our lives often very, very, very tough.  She is not happy much of the time.  She will almost certainly never live on her own, never hold a job, never be able to be unsupervised.  She is functionally severely intellectually disabled---although her mind might hold much knowledge, there isn't a way to access that knowledge usefully.  But she is also a little girl, a beautiful, funny, sweet little character that we love extremely much, and I want others to see that.  I know not every can, or will.  To be honest, I don't know if I would have been able to, if she were the child of a friend and not my own.  But I've learned that a child like Janey is not a tragedy.  She is a person, a child, my child I love. 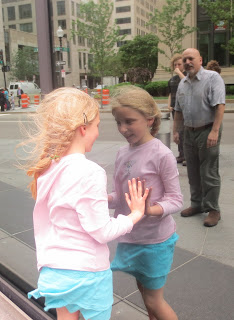 I understand this. The duality. The hardship. The delight. Both always waiting in the wings, each waiting to usurp the other. Never knowing which you're gonna get. But so thankful that the delight, the humor, the moments of happiness can be enough to sustain me through the moments that are so tremendously difficult. Here, tonight was difficult. I'm hoping delight returns in the morning.

I know what you mean. For me sometimes its like this- I will be feeling sorry for myself but when someone chimes in I find myself defending her saying, its not so bad. And I think of all the wonderful times.
I don't like all the "medical stuff" for that reason mostly. Because there she is a case study, the "autistic girl" stripped of her sweetness and regular kid-ness. Like, yes she is autistic (or not, whatever the case is, we don't know at this point) but she is also our daughter and we think she is wonderful. Don't look at us in that pitiful way. Its almost an idignant "we don't need your pity" kind of feeling. Or it just makes me feel kind of sad. Treating us as if we are victims of a tragedy (I wrote about this a while back too). Its a balance for sure.