Janey's end of the year awards ceremony was Friday.  For one of the first times since I've been a mother of a child at school, I was a Very Bad Mother and skipped it.  I had what I felt like were reasons.  I spent the morning at Janey's school, not with Janey but with William!  He was asked to give a speech at the 5th grade graduation, as a graduate of the same elementary school Janey goes to (Henderson Inclusion) who is now going to college.  Here's a picture captured from the video of him. 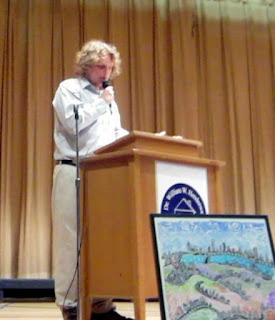 I was so proud of him, and he said being at the school reminded him of what a special place it is.  We saw Janey in the hall, and she responded to seeing William as you would to seeing something that can't really be there---by pretending he wasn't there and hoping the weirdness would go away!  She did give me a hug.  But by the time I got William home, I was tired out of my mind---the pre-lupus or pre-scleroderma or whatever it someday turns into makes me very tired, and I take a nap most afternoons.  And I also just sometimes have a very hard time with events at Janey's school where I see the sharp contrast between her and the other kids around her.  Even though it's an inclusion school, most kids there do not have any disabilities, and the ones that do are mostly all higher functioning than Janey.  I love that for an educational surrounding for her, and so I should not mind it when it's part of a show, but this time, I decided to give in to tiredess and sleep instead.  Tony picked Janey up at the usual after-school time (last day of afternschool, darn it all!  It has been a lifesaver this year!)

But when I saw the award Janey brought home, I wished I had gone to the ceremony.  It was an award for Declamation!  And it was perfect.  It was an award that was REAL---for something Janey really does very well!  They memorized a poem this year, Knoxville (here is it if you are interested), and Janey had it down cold, and could say the whole thing, completely, and with expression.  If there is is one skill Janey truly has, it's declamation!  I knew how much thought had gone into that award, which reflected the thought that Janey's teacher, therapists, aides, support staff---everyone!, gives Janey every day.  There was something about that award, though, that really got me.  I started crying when I saw it, because it was an award for something Janey did well even when putting her up against "regular" kids.  It made me think how Janey really, truly does have strengths, and that her school and her teachers allow them to shine.

I am so proud of all three of my kids.  They all have their own areas to shine.  All three of them have been helped and loved in their own way by the Henderson School, and I want to thank the school and everyone who is part of it.
Posted by Suzanne at 6:54 PM

That is wonderful ... both William's speech and Janey's award. Having a school which recognizes all accomplishments is a blessing, indeed.

Congratulations! You really do have wonderful kids, no doubt. That school is a real blessing!