The big storm last Friday has resulted in no school of course that day, but also today and tomorrow.  That's created a 5 day weekend, and Janey is not pleased.  Snow days are not her favorite thing.  She likes being out of the house, and she seems to have an internal clock and calendar that doesn't like surprises.  She was happy enough a lot of today, but lost it hugely toward evening, which might have also been prompted by Tony having a doctor's appointment after work---she might have thought he was gone on a trip again.  She screamed for about 2 hours.  After about 75 minutes, I called her brother Freddy, who was playing video games in his man cave, and asked him to come help, which he did promptly and well.  He played with her and cheered her up, but only when he was there---after about 10 minutes, he had to go, and she reverted to screaming.  It is always hard when other people can make her happier than me, although I know at points like that it's just because I'm out of ideas and at my limit.  She cried for a while for Daddy when he got home too, but then cheered up when he cooked for her, and is now asleep.  Let's all hope I make it through tomorrow in one piece.

One of the reasons she wants Daddy home right when she expects him so much is that he cooks for her.  I cook, but I don't cook as well as Tony, and I'm not as good at short order cooking.  He cooks her what she wants for dinner every night.  That was making me think about this article I read about problems with diet and eating in autistic kids.  I don't think of Janey has having many food issues.  She eats a healthy diet, and she eats well when she eats.  But in some ways, she does have issues.  She very, very rarely will eat the school lunch, per the reports I get, but when I packed her a lunch, she ate that even less.  She doesn't like food that is not hot, or that is not freshly made.  She also doesn't like bland food at all.  Her food needs to have an edge to it---to be hot in spiciness or temperature, to have a sharp or unusual taste, most of the time. Here's a picture of her with her favorite treat... 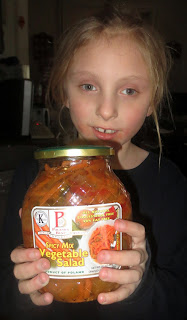 It's a pickled vegetable salad that my parents find at a store in Maine.  It's basically assorted pickled veggies in a brine that tastes and smells like sauerkraut.  I can barely stand to look at it, but Janey will eat the whole jar if you let her.  It's loaded with vitamin A and C, and is probably one of the better snacks she could have, but it's odd.  You aren't going to find it as a classroom snack at school.  I sent in a lot of snacks for her to eat during the day because she won't eat the lunches, but the things she would like most, like that slaw, would be a bit hard to serve in a classroom and would probably gross out the other kids.  I worry sometimes about how she'd get by if she ever had to eat conventional meals only---if she ever went someplace overnight.  I wonder if we should try harder to get her to eat more "normal" meals.

We have never tried special diets with Janey.  I watch her closely to see how her moods relate to her eating, and as long as she DOES eat, I haven't many.  If she won't eat for a while for some reason, she gets very upset, but I haven't seen a behavioral connection to what she eats, with one exception---caffeine.  She is EXTREMELY sensitive to caffeine.  Not that we are giving her coffee or caffeinated soda (although she sneaks both if she ever gets a chance) but she is sensitive even to the caffeine in chocolate.  If she has any chocolate at all past around noon, it's extremely hard to get her to sleep that night.  She goes into her hyper, manic mood.  This happens with even a small amount of chocolate, like a few M&Ms.  I can see how other foods that other autistic children might be sensitive to could bother them in very small amounts, based on this.

To make this a true hodgepodge, here's a picture of Janey out in the snow.  We couldn't stay out long, as she would not leave on her mittens.  She wants to touch the snow, and cold hands don't seem to bother her, but I didn't want frostbite to set in!  She had a great time the short time she was out, though. 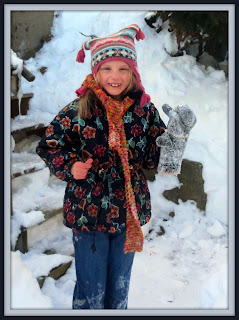 I am a spicy food addict, and those pickled vegetables don't even seem appealing to me! But at least they ARE vegetables...

That photo of Janey in the snow is adorable! I love her hat, and her smile is just too cute.