J is for Janey 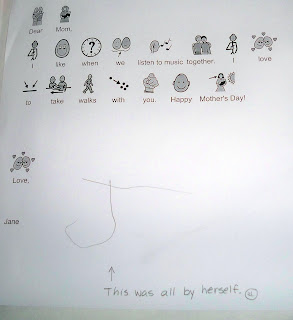 This is a picture of Janey's Mother's Day letter to me from school. Her special ed teacher told me this morning that she gave Janey choices in writing it for her, like asking her "Do you like listening to music with Mama or cooking with Mama?" and Janey answered her right away and nice and loudly and clearly, not whispering as she sometimes does lately. That was special enough to hear, but the "J" signature was a wonderful, wonderful surprise for me. I burst into tears of happiness when I saw it. I knew they had been working with Janey on writing a J as a signature, but to actually see it there---wow. There's something about it that is very symbolically special to me. It's like Janey saying "I am here! I did this!" I know I'll treasure that letter forever. Thank you, Jen and Christine!

Earlier in the day, Janey's class had a publishing party, where kids present their writing. It was done this year as a movie, which was very neat to see. It's amazing what kids accomplish during 1st grade. They go in not knowing how to read, and come out able to read and write. Of course, not Janey, but for some reason today, although I braced myself for it to bother me to see, it didn't at all. Janey was in the movie, and she did her best. She finished sentences about what she likes to do. All the kids did their best, and they all were amazing.

The best part of the movie was at the end. The whole class was dancing in a circle. Janey was right in there with them. She wasn't any different than any of the other kids, except for being (in my biased eyes, admittedly!) the best dancer. Then there was a shot of two other girls and her dancing. She was so, so happy, and the other girls looked happy to be with her. Janey was in her element---music and moving around. Those dancing scenes were inclusion at its best. Tony took a movie of the movie, and I will love seeing that scene for the rest of my life---Janey dancing with joy, part of the group but also her own amazing self.
Posted by Suzanne at 10:55 PM