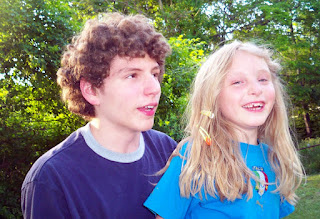 Janey's brother Freddy has always been one of her favorite people. If you believe anything about astrology, which I don't, it would make sense---they share a birthday, so all those newspaper "if you were born this day" personality blurbs would be the same for both of them. Before Janey's regression, when she was two, she often called Freddy her "best friend forever" I think her regression was harder on him than almost anyone. He went from having an adoring sister to a sister that barely noticed him.

Just lately, the Janey that adored Freddy is showing herself again. The way her face lights up when he plays with her is like nothing else. Tonight, Janey and I were in the back yard, and I called Freddy to come out if he wanted to. He did, and when Janey saw him, she said, without one bit of prompting, "Hi, Freddy!" If you know Janey, she is not big on spontaneous greetings, especially to family members. She then followed him around, with a look on her face that can only really be called hero worship. He gave her piggyback rides, he showed her his attempts at cartwheels, they played "I'm gonna get you" and "Hockey Pokey"---they had fun. Not just Janey, but Freddy too. Gradually, I am seeing more of this, and it is wonderful. I think Freddy and Janey both really do have a BFF for life in each other.
Posted by Suzanne at 7:33 PM

That's so great! Love the photo; the smile on Janey's face is priceless.