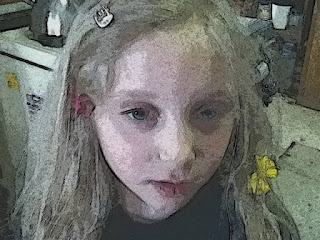 Freddy and I took Janey to the mall today. I don't go to malls much at all, and especially not with Janey, but Tony needed to do work around the house and it was raw and rainy, and I couldn't think of another place to go to get out of the house for a while. Janey didn't care for the mall---big surprise. She didn't do that badly at first, although I didn't attempt to actually shop or go into any stores, but she didn't mind walking around, and she was quite happy to take some escalators---she loves them. I went into the Target at the mall and let her look at the toys, but she mainly just knocked them to the ground and tried to escape. Luckily, Freddy is quick and caught her. And soon after that, she'd had enough, and started screaming. I could almost relate. I feel overstimulated at malls too. But we had promised Tony to try to stay out of the house for a while longer. We tried going to Five Guys and getting a burger, as Janey likes their fries, but she was not up to the line and did one of her latest tricks---taking off her shoes and tossing them a bit. I gave Freddy money to get the food and took her to the car, and we ate there. That went fairly well, until she decided to spill soda all over. We headed home after that, although Tony wasn't done, but I was out of ideas.

Of course, it all made me think. There is little I can with Janey. We can't eat at restaurants, we can't shop (except a quick grocery shop, which she usually tolerates), we can't go to other people's houses usually, Janey doesn't have playdates or lessons, she yanks books and is loud in libraries, if she isn't crying----there are so few options. I could not even have done the brief mall walk without a wingman in Freddy---she'd have been lost in the Target, most likely. When the weather is better, we can sometimes go outside places, but I have to hold Janey's hand at all times unless we are in an extremely secure place. Autism itself is isolating, but the lack of ability to do normal everyday things with autistic kids creates even more isolation for them. I am so thankful for school and after school, and summer school. But I wish Janey's world didn't have to be so small.
Posted by Suzanne at 7:42 PM