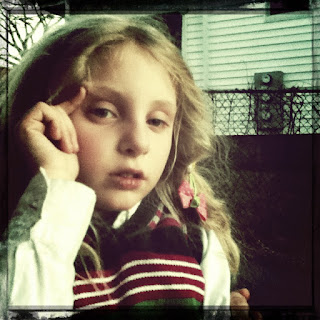 Janey has not been happy this week. She's been crying a lot in the evenings and over the weekend, and been fussy at school the last few days too. This morning felt very long, with off and on tears. I kept saying "What's wrong?" or trying to model a sentence for her "I am sad because I want......" or "I am angry because....". Sometimes she will fill those in, but it usually doesn't help much when she does. It occurred to me today that I rarely know exactly why I'm in a bad mood when I am. If someone gave me a sentence like that to fill in, it would be rare I could think exactly how to fill it. Usually it's a combination of things, or something I have no idea about. So I started saying to Janey "You can say 'I am in a bad mood' when you are upset". I said it over and over and over, as I often do when I want her to learn something, and by the end of the ride to school, she was saying it too "I'm in a bad mood! I'm in a bad mood!" and the crying seemed a bit less. With the special kind of mindreading good teachers have, her regular ed teacher said to her as she approached the room obviously not happy "are you in a bad mood today?" I said that she was. I'm going to try to try that for a while---not trying to figure out what's bothering her, but just giving her a name to use for her moods.

The picture shows something Janey does a lot---she pulls on the corner of her eye. I think a lot of kids with autism do similar things. I would guess it makes things look a little different, and just gets to be a habit---I'm really not sure. I've tried to catch it in a picture for a while.

So, a tiring week, for Janey and for us. It's a little hard not to get discouraged during weeks like this, but I'm going to try not to.
Posted by Suzanne at 9:05 PM