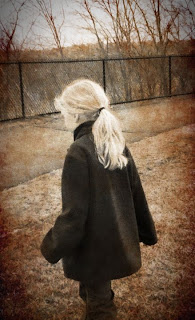 We've had some tough days lately. Janey mostly holds it together at school, but has been falling apart in the evenings, and today, all day. It often starts when she wants something she can't have unlimited amounts of, or that we don't have around. One night, she wanted Funions, and we were plum out, and she didn't take it well. She loves having her teeth brushed, but we have to limited the toothpaste (even though we get fluride-free for her "fun" brushing, but we can't afford to use up a tube a day) and she gets furious. She can't have everything she wants, and of course even if she did get everything she wanted, there would be something else she'd think of to want. But what is different is her reactions. I certainly never gave the boys everything they wanted, and they learned that life is like that. But when Janey gets upset, if it's the wrong week or the wrong mood, she doesn't recover. For hours. We go through hours of her screaming, hysterical. Usually now it's not literally hours, but often up to an hour, and sometimes more. When she's in a good mood, it seems like we are making progress, but when she's not, I don't see any evidence she'll ever learn from not getting what she wants. Which is a very, very frustrating and depressing thing to think of. I try not to project too badly into the future, but I do. I'm picturing Janey as a woman, and us increasingly old and frail, and her wanting Funions, and all kinds of scenerios where that doesn't end up well. And I can tell myself that it won't be like that, but at low moments, I wonder. If you haven't, I recommend reading Karl Taro Greenfeld's book "Boy Alone". Noah was the boy featured in a series of books written by his father, Josh Greenfeld. I read them long before I had Janey. Noah Greenfeld is autistic. His parents did everything, EVERYTHING to try to help him. And nothing really worked. His life today, as a man just my age, is a very sad life to read about. His parents had money, resources, some degree of fame and an endless amount of caring. Noah even got lots of ABA, long before that was common. But nothing really did anything. I don't think that will be Janey, but in my dark days, I think about it. We all want to feel hopeful and bright and think that the future is limitless. But that's not necessarily the truth. I need to stop thinking like that. The picture is from a walk I took with Janey early this morning, after she woke way too early and the other members of the family needed to get some things done that were impossible with her around. I loved walking with her in a deserted part, just letting her do what she wanted. I need to create moments like that for her. I need to stay hopeful.
Posted by Suzanne at 3:22 PM