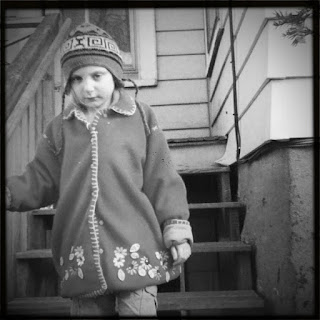 I've been taking a lot of pictures of Janey lately, and many of them come out with her having "the autistic look". It's a look I think most parents of autistic kids recognize instantly. It's what sometimes allows us to identify other autistic kids we don't know, in stores or libraries or parks, at times I think even before the parents know the child is autistic. It's what I used to think of as a blank look, or a inwardly looking look---a look that doesn't quite connect to the outside world. Today, when I was looking at pictures of Janey, I had another thought about the look. I think it's a stoic look. It's a look that says "I don't really get what is going on here. I don't know what crazy thing is going to be thrown at me next. So I'm going to be stoic. I'm going to just reserve judgement and emotion for a while. I'm going to not commit to any reaction. I need a little time to decide how I feel about this" It's a look I think Janey and other kids put on because they aren't quite in total synch with the rest of us. It's not that they are slow, or unaware---they just don't quite operate on the same plane. So they keep a neutral look. It makes a lot of sense, really. It's what I think I do when I'm overwhelmed, except I add in a little smile, or a "I'm busy thinking about something, but it's not that I'm being unfriendly" touch. I know how to do that. Janey doesn't, or doesn't care to. So she goes into stoic mode. The picture here isn't the best example, but it's the one I took that gave me this idea, for some reason, so I'm putting it here. I've got to think more about this one.
Posted by Suzanne at 9:21 AM

It's a very beautiful picture! I can see the 'look,' yes, but I do agree that it has a stoic quality to it, as if she's backing away from the situation to assess things in her own way, on her own time.