Day One with AAC apps

I thought I'd write white it was fresh in my mind about how it went yesterday afternoon introducing Janey to her new iPad with three AAC apps on it.

I was a little nervous about showing Janey the "talker", as I had told her it was called.  I'd mentioned for a few days that I was going to get her a talker, and that she could use it for an extra way to talk.  She had seemed somewhat interested, and yesterday before going to school when I mentioned it, had actually said "Talking!  Talking!  Talking!"  But I was wary, as sometimes if Janey doesn't like the looks of something, she will never, ever take to it after that first negative impression.  And a few years ago, when I had gotten some demo versions of AAC apps, she'd hated them. So...

Right when Janey got home, I had the iPad out and waiting.  She asked for cheese, and I used the TouchChat app, and said "Let's see if we can get the talker to say that!"  I made it say "I want to eat cheese", and right away I went to get cheese, leaving the iPad with her.  As I had hoped, she jumped in and played with the "dairy" category I had open, pressing "ice cream" and "butter" to hear them said.  We had the cheese, and then Janey asked for soda.  I did "I want to drink..." and got onto the "drinks" page, and she pressed "soda".  So far, so good!

When Janey asked for the store, I had TouchChat say "I want to go to store" while Janey watched with interest.  We went to the store, and when we got back, Janey right away grabbed the iPad and had TouchChat say "I want to talk to Grandpa"  I wasn't surprised, as her teacher had told me that's the sentence she often does at school.  Still, it took going through several screens to get it said, and I was impressed with the ease she had doing that. 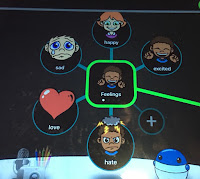 A bit later, Janey started screaming, a common interlude in our afternoons.  This time, I used Aacorn, and brought up a choice of five feelings.  This app is a little different---when you pick a general category, it gives you a circle of five choices, surrounded by the general category, so this said "Feelings" surrounded by "happy", "excited", "sad", "love" and "hate".  If none of those are what you want, you can press the "Feelings" button again and get more choices.  The more you use the app, the instructions say, the more it knows what you might pick, and puts those choices in the first 5 to come up.

Janey picked "happy", even though she was screaming.  That's another thing the school had mentioned she does---identifies her feelings as happy no matter what they are.  She pressed the "happy" button over and over.  I pushed the feelings button a few more times, and it came to a place with a choice to pick "hurt"  Janey pressed that, and one of the choices came up "head", which she pressed over and over.  I took it back to a screen with a Yes or No choice, and said "Does your head hurt?" and she pressed Yes, over and over.  Interesting.

Later, I showed her the Proloquo2go opening screen.  She right away started playing with it.  To me, it looks like a more intimidating and less user friendly interface, but as the evening went on, it seemed that was the app of the three she liked best.  Before bed, I put both her old iPad and the new one on her bed.  She grabbed the new one, and went right to the Proloquo app, and played around with it for quite a bit.  What surprised me is she seemed drawn to words like "I", "on", "it"---not so much the nouns.  Maybe those words are harder for her and she likes being able to hear them said so easily.

We were on the feelings screen as Janey was getting tired, and she picked "sorry" and "tired" and then turned to her old iPad and put on YouTubeKids as she went to sleep.

Overall, quite a wonderful start to trying AAC!  Janey was more interested than I had even hoped.  I'm going to work hard on keeping it all low-key.  That's essential with Janey.  She's a typical teen in a lot of ways.  If I act all hyped up for the "talker", it's quite likely she's react by showing less interest.  So I'm going to keep doing what I've been doing---modeling a bit, leaving screens open for her to play with, and just letting her have fun hearing what she presses be said.

I like having the three different app choices available for her.  She doesn't seem confused by it, so far, in these early stages, and it's quite interesting to see she seems to like busy, very full screens more than minimalist ones.

I think and hope you have found a window into her mind. There is no limit to what she knows and cannot express right now.

You know, do you think she gets migraines? I get them and lord knows I'd have prolonged bouts of screaming too if it was hard to communicate about them. Mine hurt right behind my eyebrow, usually on one side, if that would help ask?

I don't know if it would interact with any of her other medication, but I did have a lot of luck with triptan drugs for migraines, so IF that's what's happening then it might be fixable?