One year ago today

A year ago today, Janey had emergency surgery to remove her burst appendix.  The surgery was preceded by days of extreme sickness (the surgeon estimated it had been burst for 3 days before it was removed) and was followed by weeks of complications----a stay of three days in intensive care for breathing problems, another surgery to place tubes due to abscesses, being fed by TPN into her bloodstream for quite a while, much weight loss---it's hard to believe it all happened, looking back.

In a lot of ways, the health crisis changed how we look at life with Janey. To put it in a slangy way, we don't sweat the small stuff as much.  We focus more on making Janey's life happy and calm.  I think it's safe to say we decided to change our behaviors instead of trying to get her to change hers.  We did this at first because for several months, she was still very affected by the hospital stay.  She was, as the surgeon told us she would be, debilitated.  It was important to focus on very basic things, like making sure she ate and drank. 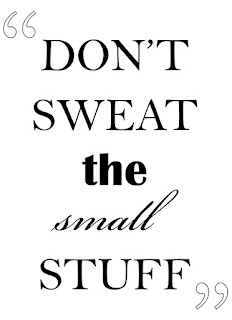 To our surprise, life with Janey got easier, overall, when we tried less to change her and more to change ourselves.  That's not why we did it, but we realized that if she's happy, everyone is happy.  If we keep her calm, we all can live our lives a bit more.

Of course, there's no miracle change.  There are still days when Janey screams a very, lot, cries constantly, gets frantic for reasons we don't understand.  But there are less of them, and they feel less desperate.  They don't seem to last as long or usually be as intense.

In the hospital, Janey watched "The Spongebob Squarepants Movie" about 50 times.  Since then, she's watched it maybe 100 more times.  That's a good example of a change we've made.  I used to always try to get her to watch new things, or, heaven forbid, not watch anything when watching TV was what she wanted.  Now, we let her watch what she wants, when she wants.  She doesn't watch more TV, I wouldn't say, but we relax and let her enjoy it, and enjoy the time it gives us.  Believe me, that was a breakthrough for me.  I always pictured myself with kids that shunned TV and instead played with wooden organic toys and begged me to let them get one more library book.  But that was me---my dream, my vision of parenthood.

Janey sleeps every night with a pillow covered with a flannel pillowcase she got in the hospital.  I looked up just now to see the name of the charity that makes pillowcases for children's hospitals---it's Ryan's Case for Smiles.  Janey has never been attached to any object like she is to that pillowcase.  She looks for it the minute she comes in the house.  That's just one example of all the kindnesses we were shown at Mass General Hospital.  If you have to have a child spend almost a month in the hospital, that is the place to be.

I feel like this post is disjointed, and that is partly because my mind keeps drifting back to a year ago.  Of all the things I ever worried about with Janey, a severe physical health crisis was about the last.  I wish it all hadn't happened, of course, but it did, and the perspective it gave me has changed me.  Our kids, all our kids, are precious.  It sounds like a sappy card, but I realize you can't take a single day for granted.  Janey, I am so glad you are with us today.
Posted by Suzanne at 8:56 PM

I can't believe it's been a whole year since Janey was in the hospital; I remember reading all of your posts during that time as you wrote them and it seems like it was only a short time ago, not a whole year. Time sure does fly, doesn't it?