I read a book recently called "My Baby Rides the Short Bus".  It was a collection of essays about raising children with various special needs, although most of the kids had autism.  It triggered a lot of thinking for me, and went along with something that had been brewing in my head.

Going back a bit...In general, Janey has been much happier this week.  The medication seems to be helping, and I hope some of the new things I'm trying are helping too, like the positive reinforcement to the extreme.  Whatever it is, I am VERY happy about it.  But realistic, too.  She often has honeymoon periods on a new medication, or a new dose, or a new classroom, or anything new.  Eventually, her moods cycle around again.  But I have to enjoy right now while I can.

I wrote earlier about Tony trying to take Janey to the store and her freaking out and screaming and him having to leave with her.  When that happened, he was buying her some salami, her favorite food right now.  For the next few days, she asked for salami over and over and over, and I told her each time "We don't have any salami.  Remember at the store when you screamed?  We had to leave before we got salami.  Next time, when you don't scream, we will get salami"

A few days ago, Janey and I went to get William from work at Whole Foods.  We left a bit early, and I decided to try a quick shop with her.  She was excited.  First, she went to the area where the VERY expensive salami is, the kind I think they must fly over on its own plane from Italy every morning to justify the cost.  Luckily, that isn't the kind she likes best now.  We found the moderately extremely expensive salami aisle and got a few packs.  They are organic, uncured, no nitrates, that kind of stuff, but she just likes them because they really do taste great.  Then, we went to look for the bread she likes, a very long thin loaf with sesame seeds that is also very, very expensive (they don't call it Whole Paycheck for nothing) 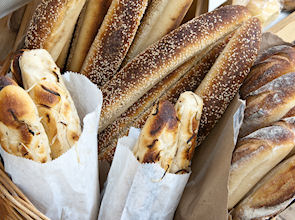 When Janey spotted the bread, she dashed over to get it.  The look on her face was amazing.  It was pure joy.  She grabbed a loaf and put it in the carriage, and looked up at me with that look---the look that seems to say "Life is absolutely perfect!  I could not possibly be happier!"

Later, reflecting on that moment, I had a thought I've had a few times before.  I thought about how once in a while, Janey's autism gives us moments that we would not get with a typical kid, moments that are wonderful.  And then, because my default emotion is always guilt, I told myself "But what cost to her do those moments come at?  Should I really feel happy about moments like that when they come at the cost of so much to her?  Should I be overwhelmed with happiness that she can have pure joy over getting the bread she loves?"

And I decided---yes, I can feel happy about those moments.  They are part of Janey.  It isn't fake joy she feels.  It's real joy.  And her ability to feel joy like that is something that can only be a good thing.  The fact she isn't thinking at that moment the things most 10 year olds would be thinking,  thinking about how her mother is embarrassing her, or about what other treats she might get, or about all the many things I would have been thinking at age 10-- that doesn't matter. What matters is she has a chance to feel the moments of extreme happiness in life we all deserve.  And I rejoice in seeing her feel that happiness.

This comes back to the book I read in that I noticed that many of the most heartbreaking essays there were written by people whose kids are right at the edge of "typical", "normal" They were about kids desperate to fit in but never quite able to, kids struggling to do work at school they never quite can do, or struggling to make friends or socialize.  They were about children feeling left out and sad and feeling like they were not making the grade.

Of course, I wish so much it's hard to express that Janey was going to have a life closer to the typical life.  I wish she could learn to read, that she could get married some day, that she could have friends she could hang out with, that she could have all the things in life so many of us take for granted.  But she can't.  However, she doesn't seem to wish those things.  She isn't really at the point where she realizes what she doesn't have or won't have.  I don't know if she ever will.  Not that life balances things out---as we all learn as kids, life isn't fair.  But I am glad, in a way, she will be spared the heartbreak some of the children in the book felt.  And I am glad she can feel joy at times.  Especially after her terrifying health setback, I am so glad I was able to see that amazing smile and joy over a loaf of bread.  I will unabashedly, unapologetically treasure that moment.
Posted by Suzanne at 8:59 AM

I agree with you that you are totally allowed to be happy about these moments of joy that Janey expresses. As I read your description of that little scene with the bread in Whole Foods, not only could I totally envision it in my mind, but a great big smile broke out on my face because I have enjoyed similar moments of joy myself. Janey may not be like other ten-year-olds, but that is okay, because she knows how to appreciate the little things - something that other kids her age probably won't do.