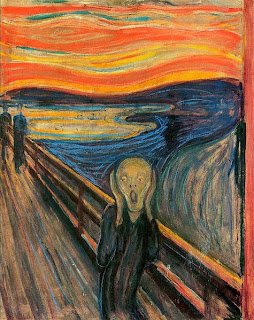 The Scream.  How do I describe The Scream?  It's hard to capture in words.  Picture someone who has just been told the worst news possible, or something who is undergoing the most severe pain of their life.  Then picture it suddenly, unexpectedly, coming from a sweet looking nine year old blond girl.  That is Janey's Scream.

Last night was a scream-fest.  Tony picked up Janey at afterschool, and she started the scream on the way home in the car.  By the time Tony got home, he was shaken.  He looked like someone who had just witnessed something horrible.  I took over.  About every 3 minutes, Janey screamed.  She screamed like she was in pain beyond imagining.  Her whole body stiffened, she turned red, she put every ounce of energy into the scream.  It was bloodcurdling.  Between the screams, she was fairly normal---a little upset, demanding, but not too bad.  But then---the scream.

Of course we tried to figure it out.  Was she hungry?  Was she hurting?  Did something scary happen?  We ask the useless questions that never get answered.  We try to comfort her, but the screams seem to put her in some world beyond our reach.

Finally, I took her into the bathroom.  I latched the latch that is up high, that she can't reach.  I told her we would stay there until she stopped screaming.  I didn't try to stop the screaming beyond that.  Between screams, she reached for the latch, and I repeated we were going to stay where we were until the screaming stopped.  The latch seemed to give her a focus, and although she screamed a few times more, she calmed down.  I told her we could leave if she was done screaming, and she echoed "ARE YOU DONE SCREAMING?"  We left, and a minute later, the scream returned, so we went back into the bathroom.  She didn't fight me about going there.  She screamed a few more times, and then again asked to leave, and we did.  No more screaming.  She was fine.  She woke in the night a lot, as she so often does, but it was cheerful waking.

What does this scream mean?  What causes it?  I have no idea.  In some ways, it seems to have replaced the crying.  Maybe it's some strange kind of step forward.  Maybe it's an expression of frustration, as Janey starts to realize that she is not able to do what other kids can.  Maybe it's something she does just because she can, a way of saying "I'm here!"  I just don't know.  Like so much else with Janey, I just don't know.
Posted by Suzanne at 7:17 AM

When the screaming starts I try to figure what my daughter wants. She can't understand choices offered to her so she is stuck in her echolalia "Yes or no? "Which one, which one?" "Pick one." It usually just makes her more frustrated even when you hold out two items because she can't see through the meltdown anymore than when people get very angry can't calm down in a few minutes. There's no off switch on my kid. One thing I do that no one has recommended to me has been to put her on my head like a hat. She learned about balance in an OT class and says "balance" when I use my head as a fulcrum. It throws her off her meltdown when she tries to balance herself. People in public probably think it's crazy, child abuse or a circus act but it seems to break her train of thought somewhat. It reminds me the Greek myth that Hercules only defeated Atlas by picking him up in the air cutting off Atlas' source of his strength- the Earth he stood on. If your kid is heavy this may not be physically possible.

Could it be a tic? I know in Tourette's they have unvoluntary actions- such as throat clearing, or eye-scrunching. Hugs. I can imagine its heartbreaking.