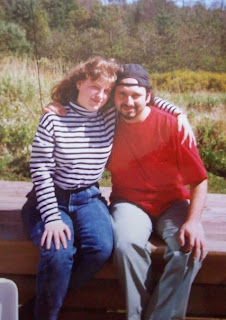 Baring any last minute divorce action, Tony and I will have been married 20 years on Thursday. Those have been good years----years with ups and down, with some serious health crises, with some losses of family and friends, but with more happiness and laughter and good times than bad.

The picture shows us just before we got married. I'd include an "after" picture, but I don't want to scare any people thinking of marriage off with how it aged me! Tony, however, looks oddly the same!

Autism certainly impacts our marriage. It can't help but do so. When you are under constant stress, when you never have a minute free of worry or supervision, when your time together is limited in the extreme---it affects you. At times, it's caused us to bicker over things so little that it would seem crazy looking back. It's caused us to feel like strangers living in the same house when we have done nothing but care for Janey for days. It's caused us to be exhausted, and not give each other our best. But overall, I would say it has made our marriage stronger. Part of that is just that both of us know it would be impossible without the other. Taking care of all our children has been a partnership, I think more so than with many husbands and wives. We need each other badly. Also, the few moments we get alone, we treasure. We don't take our time together for granted!

As with most people that get married, we took a leap of faith. I often think how lucky I got with Tony. Without us ever sitting down and figuring it all out, we have nearly identical philosophies on so many issues. Although most marriage advice writing would tell you otherwise, our children come before our marriage, and I think that has saved our marriage. We have a common goal---raising our kids as best we can. I think we both also are people that didn't go into marriage with a lot of expectations and visions. We didn't even picture the picket house in the suburbs, a perfect little boy and girl, youth sports and Disney trips and the best schools and all that. We didn't look a lot past just wanting to be together and have children. So when things got crazy, as they often seemed to, we didn't feel betrayed. We also share a strange ability to put aside the crazy times when we can. I can't think of how many days have been pure awful which we have ended with take-out Chinese, a funny TV show and a few enjoyable shared moments, and managed to end the day with a smile.

This all sounds pretty sappy and self-satisfied, reading it back, and I don't mean it to sound that way. It's been hard. But it's been a shared hard. I look forward (mostly) to the next 20 years!
Posted by Suzanne at 12:44 PM

Happy Anniversary! I think what you and Tony have is special, and you deserve heartfelt congrats on the 20 year milestone! :)