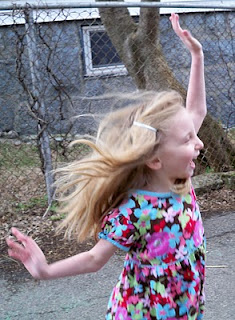 Well, here it is, World Autism Awareness Day again, and I don't have a single WAAD card out.

I did a quick look today to see what kind of events are planned for today. As I kind of half expected, I didn't really see any that were FOR autistic kids or adults. Lots of fundraisers, walks, lectures, etc. But not something I could take Janey to. I am grateful for the awareness, for the research, for all of that. But if it's autism AWARENESS day, perhaps it would be a good day to expose people to actual human beings with autism---to let them see what autism actually is and isn't. I had ideas like having restaurants have a special time, from 2-4pm or something, where they would just for that day be autism-friendly, and you could go there and not feel worried if your kid screamed the whole time, or spilled water, or ran around. You could just sit and eat a meal among other families with autistic kids, and smile at each other, and enjoy being out. Or another idea---places like indoor gyms or pools could have an autism time every April 2nd, so you could get some family recreation. Or maybe somehow there could be highly staffed parties for JUST the kids, so you could drop them off for an hour or two knowing they were doing something special and fun, while you got a break. You know, sort of like how parents of "typical" kids can sometimes take their kids to birthday parties and LEAVE them there and get coffee---that kind of luxury treat for everyone!

But those are dreams. I have to be content that Janey is living in a world that certainly IS more aware of autism than a world 20 or 40 or 100 years ago would be. I am very lucky that way. People know what autism is, kind of, even if they haven't met a lot of people with it.

I'm thinking of ways myself I can actually live up for the name of the day. How I can I make people more aware of autism? One thing I try to do is tell people Janey is autistic. I like to do that for many reasons. It explains her behavior, it lets people know she isn't just being rude in not answering them and it lets them meet someone with autism. It has worked well for me overall. There are quite a few stores where Janey is known, and I feel good about that. This blog is another way---I try my very hardest to write honestly here---to bare my heart about Janey, not just the bad but the good. I wonder if I show the good enough---that's a part of autism I want people to be aware of to---that Janey is a delight often, that she is fascinating in a lot of ways, that I love her intensely and I always will. I want to give some hope to other parents with newly diagnosed kids. But I don't want to lie. I don't want to say it's better than it is, I don't want to be all sunshine and flowers. I want to be honest. I can also encourage my sons to talk about Janey. I sometimes suggest her as a topic for essays at school, or tell them to not hesitate to explain to friends why sometimes they prefer to spend time at other people's houses instead of having kids here. I want them to be proud of her as a sister, but to also let them know it's hard, it's something THEY should be proud of themselves for---being good brothers to her.

And so awareness is a good thing. But I wish this day could somehow also INCLUDE those with autism, instead of just being ABOUT them.
Posted by Suzanne at 5:21 PM

I really love your blog. Thanks for having the courage to share your experience and insight. I know that I become more aware of autism every time I read your blog.

Thank you, Amy! That means a lot to me.