If you read this blog regularly, you might be thinking "She's writing about screaming AGAIN?"  Well, yes, because right now, it's the very toughest issue we are facing.  You might ask, "Why would screaming be tougher than all the other issues?  She's got plenty to choose from--severe intellectual disability, lack of toilet training, self-injury, sleep issues..."  Yeah, I do have a few.  But none of them affect our life quite like the screaming. 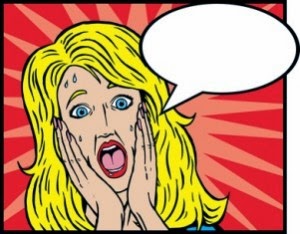 I'll use yesterday as an example of how the screaming affects and limits Janey's life and our own.  Janey was in rare form yesterday, with a huge amount of screaming.  It started early, very early, like 5 am.  We were awakened to screaming, not for the first time that night, of course, but this time we were up for good.  We tried to figure it out, as we generally uselessly always do.  She was wet, she was hungry, she hadn't had her medication yet.  We run through the list, and it helps, or it doesn't.  By around 8, we were totally burnt out.  Imagine someone repeatedly screaming absolutely as loud as they can, at random intervals, and there being no reason we can possibly figure as to why.  We resorted to ignoring.  That is very hard to do, but it works as well as anything, not better, not worse.

Later in the day, Tony took Janey to the grocery store.  That is something she usually enjoys, and for most of the trip, she did yesterday too.  But near the end of the shopping, she suddenly screamed as loud as she possibly could, over and over.  The store was pretty empty, but a man around 50 yards away started holding his ears---Tony felt not to be nasty, but just because it was truly hurting his ears.  Tony braced himself for what we always fear will happen---someone calling the cops, as it would reasonably sound like she was being tortured.  But no-one did.  She screamed until she was sick of screaming, and then fairly happily checked out and came home in a good mood.  Tony, however, was shaken and burnt out.  It's harder and harder and harder to take Janey anyplace.  The sudden screaming outbursts make it at the least not fun, at the worse, frightening.

After a while with Janey being happy, she decided to start the screaming up again.  We were at that point exhausted and completely done for.  I tried giving Janey a shower, which sometimes calms her, but she was having no part of it.  I lay down with her, trying to calm her.  Finally, in desperation, I started doing a silly game of clapping her feet together (which she loves) and singing "Clap, Clap, Janey feels like screaming (3 times for that line) But We Aren't Going to Scream!"  It worked, for then.  I have no illusion it will work ever again.  I have so many times felt I've had a breakthrough with an idea about controlling the screaming, only to have it completely not work the next time I try it.

I spent a good potion of the night trying to figure out what might make her scream.  I was too tired to think very effectively.  All I came up with is that screaming makes something happen.  It makes us upset.  Even when we ignore it, that's something happening---us being unresponsive.  If we are in public, it creates a scene.  It hurries us out.

But what good does knowing that do?  If ignoring doesn't work (and it's completely impossible to ignore her in public---WE might be able to, but those around us can't), if the events that cause the screaming seem random---what are we to do?  We have no idea.  None at all.  In my dramatic moments, I have been thinking that the screaming is ruining our lives, and Janey's life.  It's that bad.  And I have nothing positive to end with here.  Just a silent scream of my own.
Posted by Suzanne at 9:50 AM

I totally get it. When O screams, it's just the worst. I would rather have poo smearing (which she also does) than screaming.

Just a question, do you have any therapists working with Janey outside of school? We've managed to get on a waiver which awards O a sum of money per year and we've been using it towards behaviour therapy. It's definitely helped. At the very least it's nice to have someone else to bounce ideas off of. I find with O, it's normally all about troubleshooting.

The outside of school help is something I'm going to be looking into very soon. The insurance rules have changed, I've been told, to make it easier to get coverage for various therapies, and Janey's school day is a lot shorter this year, which leaves us more time for therapies. You are so right that it can feel great to just have someone to bounce ideas off of! And I agree about the smearing, although I hope Janey doesn't figure out I said that somehow!

I want to try to get my daughter to run for her and me. She has excess energy that needs to be channeled and I need the exercise. My daughter runs away and not in straight line when I have to chase her. I'm afraid she'd run in front of car. Walking a dog might be another way to distract her but you've said you daughter ignores or fears dogs. We can't get a pet because we'd like to move so that's just a hassle with an animal with us.