Today, it's the screams I'm hearing.  Janey was up a good part of the night, screaming off and on.  Tony was my hero and let me sleep through much of it.  She went back to sleep, as she seems to like to, left to her own devices, about 8, and slept until 9:30.  I had coffee and a breathe.  Then, awake, screaming.  I gave her a shower, and she seemed somewhat settled down.  So I tried to sneak in a sink full of dishes, just because I like that kind of wild and crazy fun.  I put on music, because dishes are the one time Mama gets to listen to whatever she wants, and what I wanted was some showtunes, which Janey enjoys too.  We had a good time dancing to "The Lonely Goatherd"  But the next song, "One" from A Chorus Line, was not to her liking.  So she had a scream-fest, went into the living room, put on a video, got mad at the video and pushed the VCR and DVD player off the shelf.  They didn't break (they are low to the ground) but she knows very well how we feel about that.  I was at a low ebb and screamed back.  I told her to get on her bed for a time out.  She had a funny look when I said that, almost a happy triumphant look.  She had gotten to me.  I guess every kid like that a little.  I managed to finish the dishes and she only got up from the bed about 6 times, and went back each time I told her to.  Then I couldn't make the time-out last any longer.  So she got up and, just for fun, started screaming again.  That's been our morning so far.  Now she might be gearing up for a nap, which I should not let  happen, but I am going to let happen.

A few days ago, we had a great day going to NH to the camp (Maine talk for a cabin on a lake) of old friends.  I saw people I hadn't seen in 20 or more years, and had a wonderful time.  Janey, for the most part, was good.  They had a couple boats, and she got four boat rides, her favorite thing on the earth, I think.  Everyone was good to her and to us, and she was happy almost all of the car ride, or asleep (2 hours each way)  It felt like a near normal person day, except for having to watch Janey every second and except for the few times she lunged at someone or pulled their hair (which they were so kind about, thank you, Mary!)  We never can quite pass for a normal family, but we can almost pretend for minutes at a time, like when she was sitting in bliss on the boat. 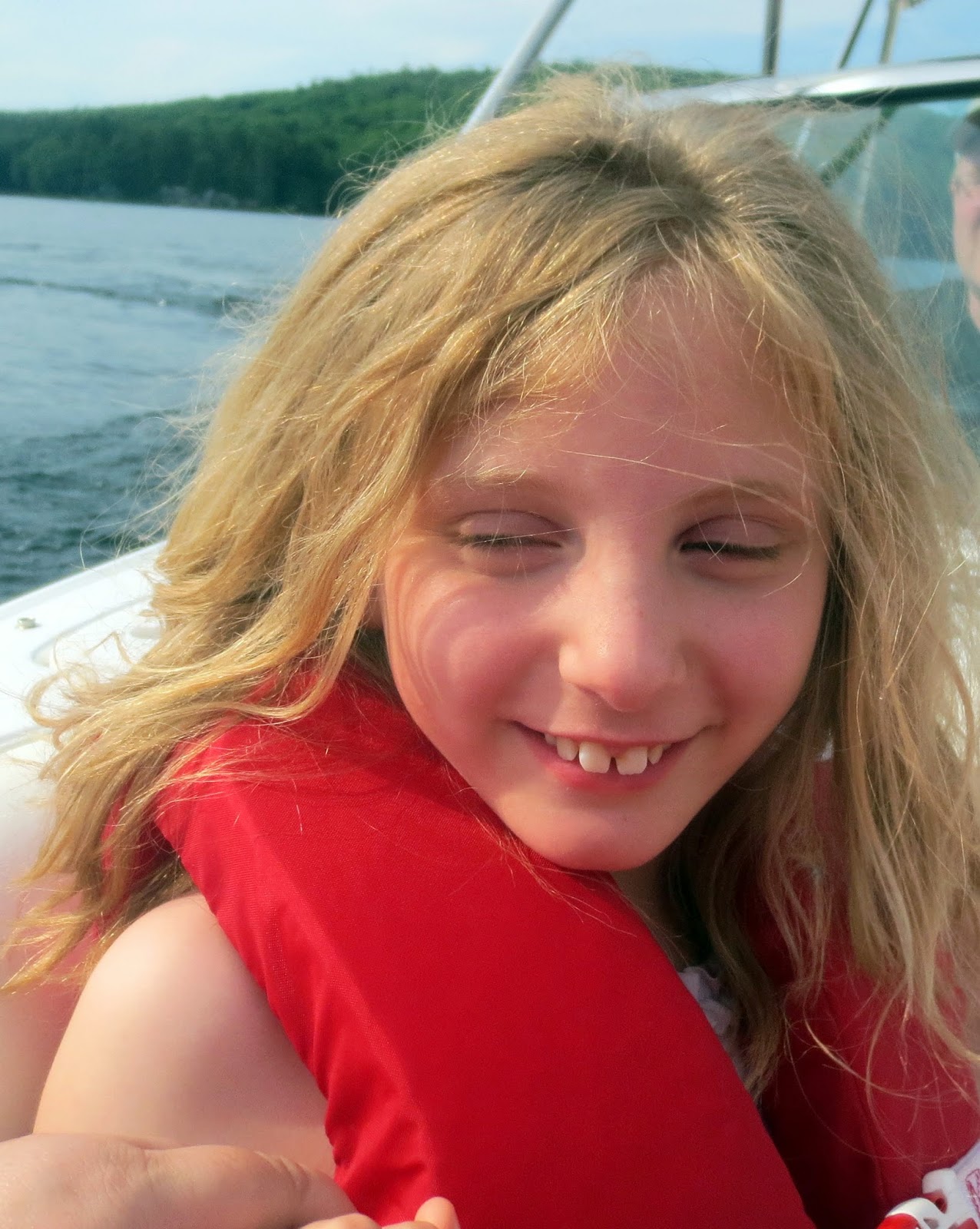 Summer school starts on Monday.  I wish I didn't long for it so much.  I wish I had been able to stick to my original plan and not send her, but I don't think I would have retained my sanity.  I hope it goes well.  She will take the bus, so I won't see much of what is going on.  Which again, I feel guilty about.  But I am starting, a little, now and then, to realize that I do really have to think a little bit about not losing my mind, or my health.  Caring for Janey is endlessly tough.  It really is.  I can tell myself it isn't, but it is.  Seeing her in NH, alongside the adorable 4 year old daughter of a woman I've known since she herself was little more than 4, I was hit a little hard with the difference between Janey and other kids.  Which I am sure anyone who has spent any time with her thinks "How could that not be something she sees clearly every second of the day?" But we all play games with our mind. I think when I really let myself see what a day is often like for me, it's, as I think I've said before, like when cartoon characters realize they have walked off a cliff.  They are fine until they look down.  I have been looking down lately.  I probably have to.  But sometimes I'd rather live in the fantasy world without gravity. 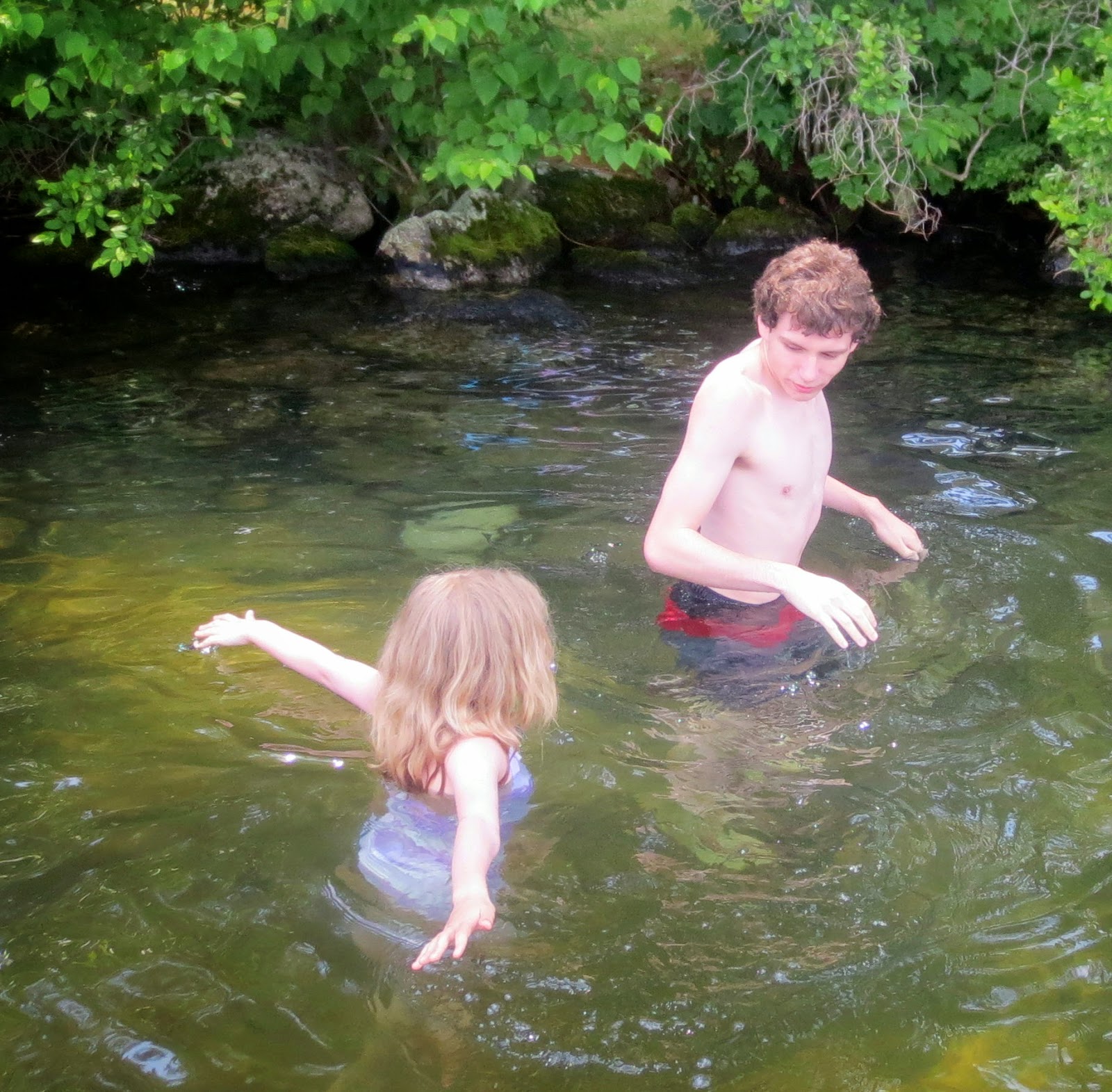 My ASD daughter has worn us down and her formal diagnosis has finally shown us what we already knew but how little help we've been getting. Six hours/week of special education during the school year fell far short of what a specialist doctor recommended for an IEP 25 hours/week all year long. The devil makes work for idle hands so my kids are always busy doing something and people don't get how draining an ASD kid who, like Peter Pan, never really grows up. At least normally maturing kids go on to more complex tasks and different types of play but I'm not getting kind of feedback from my daughter so far. I hear a lot about "It gets better" but I'm not sure when that stage it kicks in or what "better" really means. I hear a lot of positive talk but it's not what I see in my home. My daughter isn't always moving like the Tasmanian Devil and does like to laugh but it's like she's always at play and has to be fooled into learning things and it doesn't happen alot.