Downs and Ups and Downs

With Janey, part of what makes every day an adventure is you don't know which Janey you're going to get that day.  That's been particularly so this past week.  Usually, Janey's moods last a few weeks or so, but lately, they have picked up the pace and seem to change every few days.  It's emotionally a roller coaster.

Last Friday was a very tough day.  Janey got home from summer school about 3.  She had had some tough times all week after school.  I spent a lot of the day Friday while she was at school trying to think of strategies to help the couple hours between when she gets home and when Daddy gets home be happier ones for her.  I planned out a list of things we could do, depending on what she wanted---lots of snuggling, watching videos together, having a shower, playing outside, eating, reading---whatever she wanted.  I planned to be totally at her disposal, or to just let her rest, if that is what she wanted.  I was determined it would be a good afternoon.  Well, she got off the bus crying, and things deteriorated from there.  She wanted to do nothing I had planned.  She wanted to scream.  Between screams, she wanted to SAY she wanted something, like a drink, a snuggle, a shower, time outside, and then as soon as I tried to do that thing with her, she wanted to scream some more, and bite her arm, and fling herself down on her bed, and be hysterical.  I was tired out of my mind after half an hour or so.  In frustration, I finally yelled out "I can't take this any more!"  That stopped her cold---she seemed interested in the phrase, one I don't think I've ever said to her before.  I really don't like saying things like that to her, ever.  She took it up herself, and started adding it into her screams---a good long scream, and then "I CAN'T TAKE THIS ANY MORE!"  Which I bet she couldn't.  I finally just kind of gave up---I let her scream it out, while of course keeping a close eye on her to make sure she didn't hurt herself or try to leave the house or anything.  Tony got home, and she instantly dried her tears and hugged him.  I felt about 2 feet tall.

So....I wasn't much looking forward to how the day would go Saturday.  However, somehow, by some twist of fate or miracle, both Saturday and Sunday were amazing.  It was probably the best weekend we've ever had with Janey.  Ever.  She was extremely happy, extremely engaged, full of hugs, saying all kinds of cool and relevant things, a joy beyond words.  I have no idea why, any more than I have any idea why Friday afternoon was so awful.  I've been trying very hard lately to live in the moment--to not spend the bad moments projecting into the future, to not spend the good moments worrying they won't last---to just accept each moment as it comes.  I've got a long way to go with that, and I am sure I did spend too much of the weekend trying to record in my mind just what circumstances had led to things being so good.  However, I don't think it was anything in particular.  It was as random as any mood of Janey's.  But it was wonderful.  We drove her brother to work both days, and she piped up in the car with comments here and there "Maybe we are lost!"  "Pepperoni Pizza!", and with songs and just happy, non-manic laughter.  We got her some pizza, and she sang "Staying Alive" to the cashier and charmed her.  We went into the Target and tried on hats and glasses and necklaces.  We went to the arboretum near us and looked at trees.  We snuggled a lot, watched some TV, ate a lot, all the glow of her wonderful mood.  At one point, in the car, Tony and I said to each other that when she is in that kind of mood, there is no child on earth more wonderful.  I remarked that if she was ALWAYS in that good a mood, we probably would be used to it.  It wouldn't seem as wondrous.  And we both got teary-eyed, thinking of that. 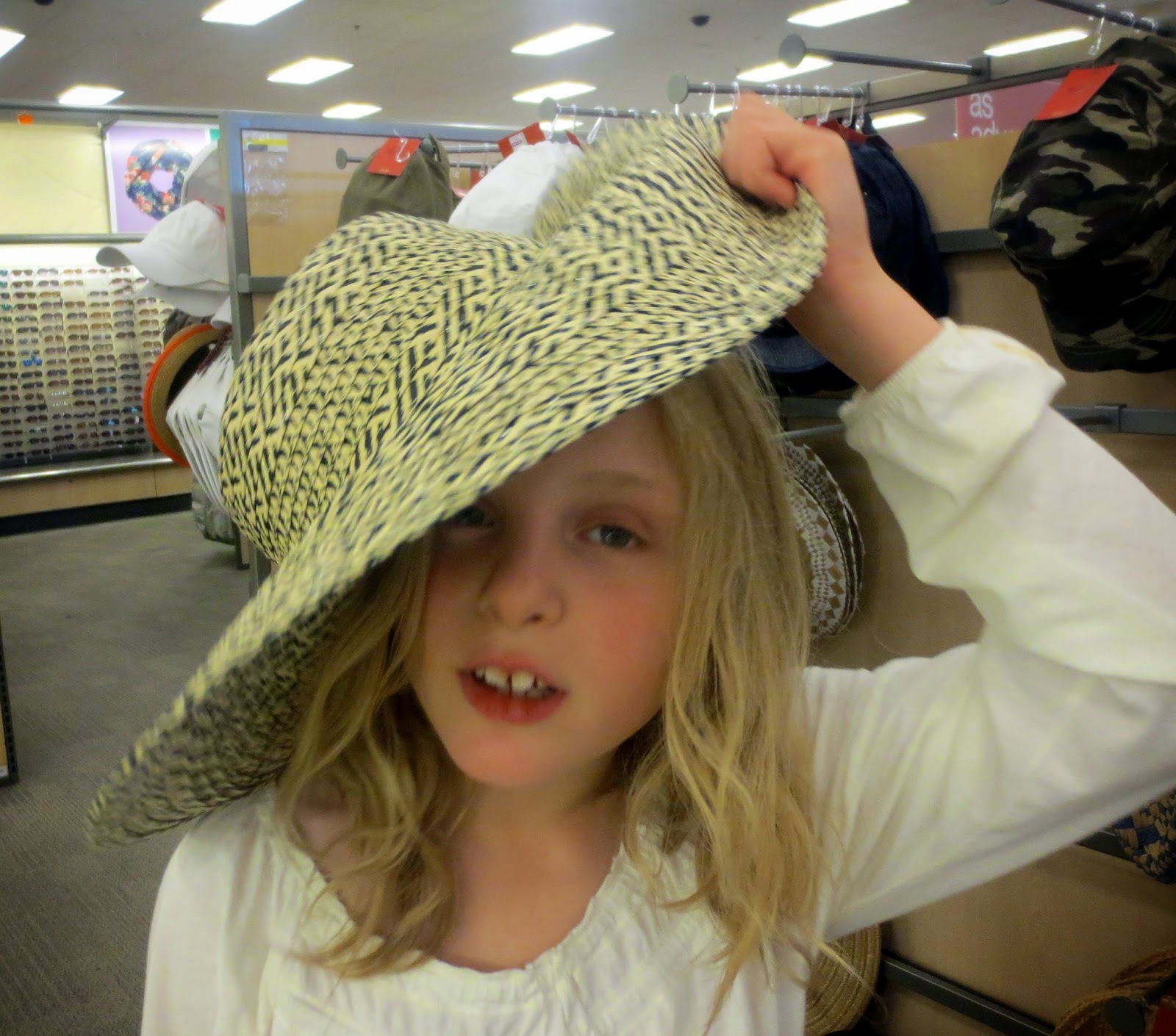 So...Monday was okay.  Not as happy a day, but okay.  And then today---after school, it was another Friday.  So much screaming and crying and arm biting.  It was hot, and I offered to fill the wading pool.  Janey wanted to, but as soon as we got back there, the ear-shattering screaming started.  For a few minutes, I still tried to fill the pool.  But I couldn't for long.  Her screaming is loud enough to be heard a block away.  It sounds like she's being tortured.  I turned off the water and took her in, where she continued to scream pretty much until Daddy got home, and this time, even Daddy couldn't fit it.  She screamed off and on all evening.

Now she is asleep, and I am weary but unable to sleep.  I wish so much I understood my little girl better.  I wish I could figure out how to give her more happy days.  Seeing how very, very happy she can be, it sometimes makes it almost harder, because I feel like there must be a key someplace.  There must be a way to pry open the door to the happiness that seems to snap shut suddenly and randomly.  But I don't know how.  And she can't tell me.
Posted by Suzanne at 11:09 PM

Maybe the break of the weekend is what she needs the most. I notice with Age big time she has a lot more seizure activity in the middle of the week and it's because she's so stressed from too much going on in the beginning or end of the week. She's the same way as Janey, some days she loves to watch movies then other days she just doesn't want to sit still. Where whatever we offer, she doesn't want to do. Music helps Age a lot so letting her go lay in her bed under all those weighted blankets with the noise machines on and room temperature away from everybody is what she needs the most. She would scream all the time and break everything in the house, look almost psychotic like she was possessed. We had no idea she was just so extremely overwhelmed by sensory stimuli, people even her own family, outside noise, etc. Her mother has to be ready whenever Age gets up cuz if the tv is on and she doesn't want to hear the backround noise, the tv must go off or begins a huge meltdown. Then some days she allows it.

Everything is on a schedule and routine to them and we are basically in that schedule/routine and have no idea where or when.if anything distrupts their mindset the whole house becomes chaos. And then there's times where it seems routine doesn't matter like the day before it was so strict and today she was easier going. Not a clue why. But that's autism for ya. Would she tolerate noise canceling headphones or having noise machines? I don't know if you do this, but whenever she comes home. We usually have the lights dimmer, tvs off, and all wait to see how she is. It's helped us. Still every night though is the same thing. We must let her 1:1 know whether to come early or late. Whether it's a good idea to watch a movie indoors or actually go out of the house. Hoping were right. Then we must have plenty of health snacks. Her shake ready. Then when it come home from work. I gotta assist her to get dressed. Stay with her until she's ready or she just drifts into her own world. Make sure she goes to the bathroom. Get her distracted. I take shower. Get dressed. We go out to get exercise. Then I make dinner. Get her distracted again. Follow her into her room make sure she gets changed. Then we watch tv whatever she wants. Eat the same food she wants every night. Same thing. Then I have to wipe her bed. The floors. Shake out her clothes. Change the Vicks in the machine. Get her ready to brush teeth, wash up. Then it's a long routine of going to the bathroom like 10 times since she never goes the whole time and if she doesn't go 10 times to the bathroom. More then likely will get up in the middle of the night. Gets her magnesium. Distract her to clean up the dishes and the rest of the house. Get her in bed. Brush my teeth and ready for tomorrow. Get her up to do the 10 time bathroom visits. Get her to bed. Wipe her feet. Turn on all noise machines and air purifier. Tuck her in. Pull up sheets. Fix pillows. Massage her joints so her muscles relax. Etc etc. I can go on and on. We do the same thing every night. Nobody will ever go into detail how autism controls everybody's lives. It's always walking on egg shells. And honestly it's nowhere near as bad as when she was a kid. She banged her head, bit herself, escaped, destroyed everything in her path, screamed and was always angry as a kid. Much happier as an adult.

Long story short. Try maybe doing a day at the spa for her, massage her. Turn on noise machines. Maybe she's just completely overwhelmed with school routine then to home to routine. The transition parts are always hard. Anywho. Good luck.