If you are a parent of a child with low-functioning autism, everything I'm going to say here is probably preaching to the choir.  You know what toys work for your child, and although they might not be the same ones I mention here, you know how hard it is to find toys they like.  I'm writing more as a response to quite a few lists I've read in parenting publications, titled something like "10 Great Toys for the Child with Autism!"  Those articles drive me crazy.  They are nearly always aimed at high functioning autism, and they include toys that not only would have absolutely no appeal to a child like Janey, but would sometimes be actually dangerous for her and those like her---things with tiny pieces, things that could be eaten, etc.  They also seem to be aimed at what the child SHOULD learn, not what they would enjoy.  So often, they have suggestions like co-operative games, which would be great as a teaching tool at school, but are generally not at all what the child with LFA like to do for FUN.  And toys should be fun.  So here's my response list, one you might be able to give a relative or friend that wants to get your child a toy they (possibly, no promises!) will enjoy. 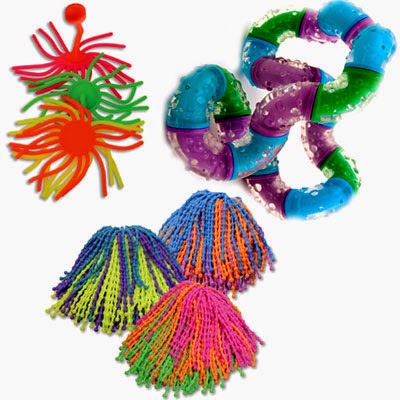 1.  Fidget Toys  I could almost end the list right there.  The absolutely most successful kind of toy for Janey, and for a lot of kids like her, is what is called a fidget toy.  It's a toy that can be handled, twisted, fiddled with, pulled on, in general, fidgeted with.  The pictures tell it better than I can.  I love having a box of these around for Janey, to pull out in difficult moments or what we have to wait for a bus or otherwise sit around.  These toys are often sold, strangely, by office supply stores, as a lot of adults like them at their desks.  I don't generally like to mention any specific sites or stores, but I've ordered from these folks at Office Playground  and they have a huge selection of fidget toys and good customer service (they didn't ask me or pay me or even know I'm giving them a shout out!) 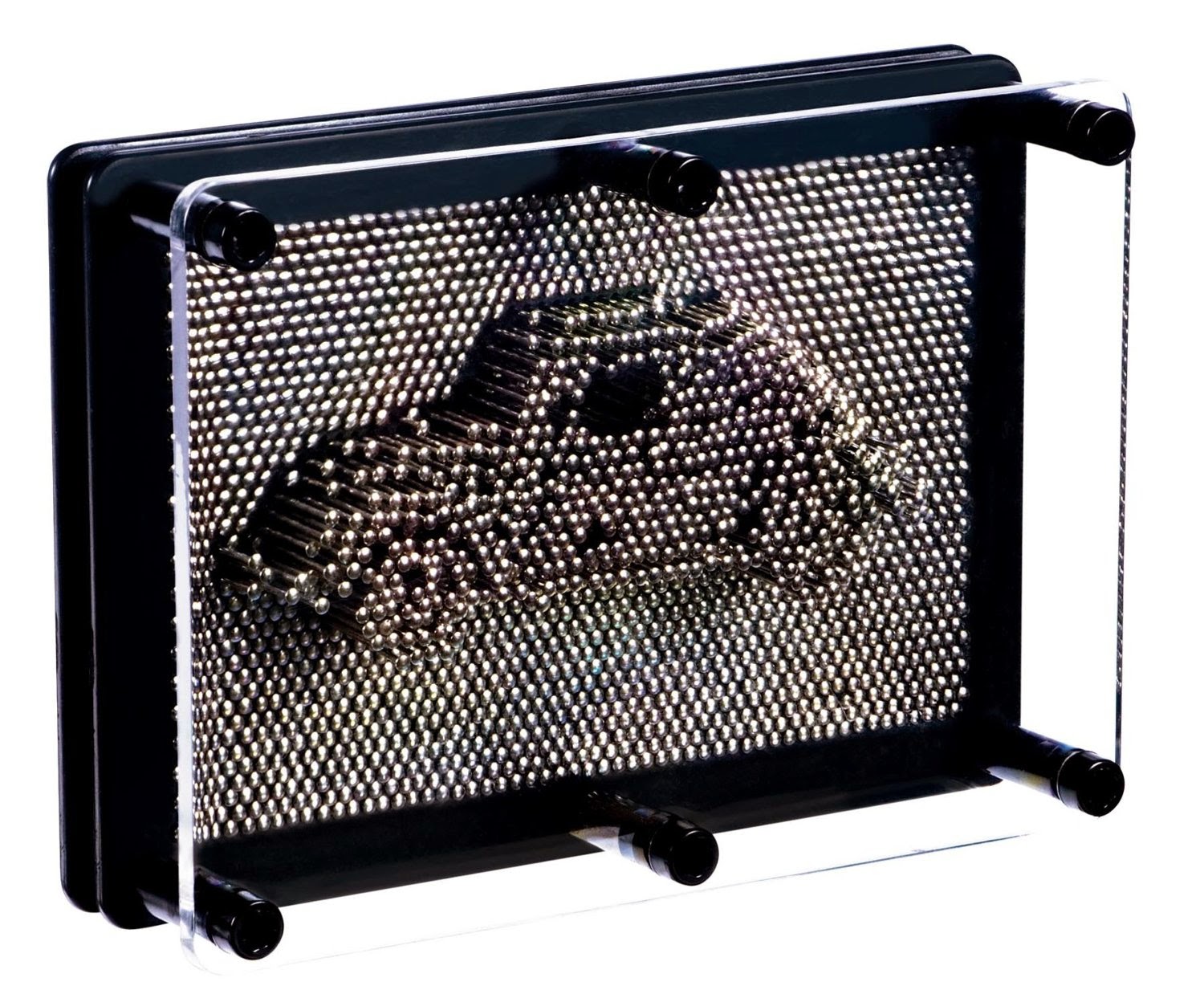 2.  Pin Art Toys  I have gotten Janey quite a few of these, and she loves them to death!  They are fascinating to her. 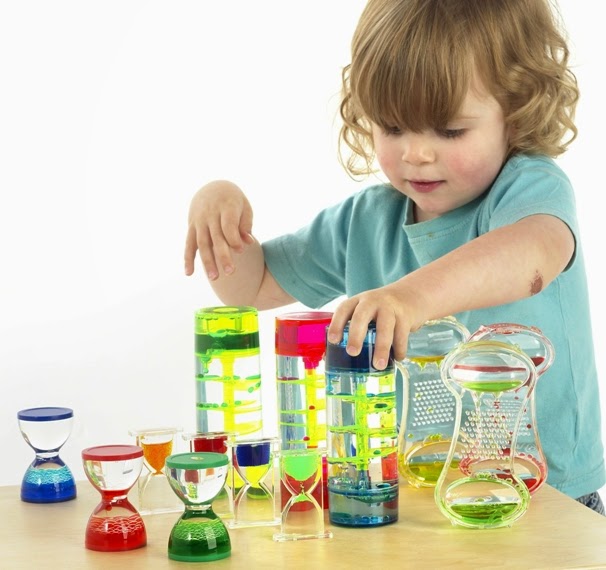 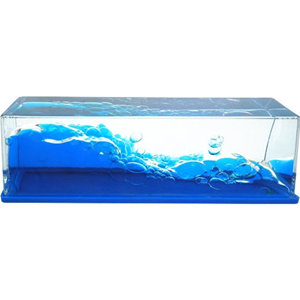 3.  Contained Water Toys  I made up that category title as I don't know a name for this type of toy. Basically, it's a toy with water inside, one you can move around to manipulate the water, which often has drops of dye in it, or waves made from dyed water. 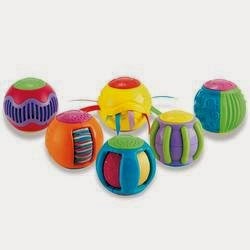 4.  Various Fisher-Price Toddler Toys  And other companies too, of course, but the ones I've found that Janey likes best are by Fisher-Price.  She adores their Roll-Around toys, little balls with things sealed inside to look at and shake.  And one of the biggest hits we've found is a line of toys I don't think they make any more, called Amazing Animals.  They are larger sized hard plastic animals that are jointed, and make a very satisfying clicking sound when moved around. 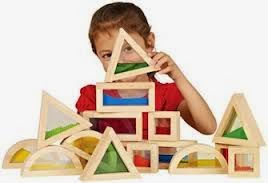 5.  Musical Toys  This is where I have to be cautious.  Although Janey adores music, often music toys are a little beyond her, and she completely ignores them.  I've gotten all kinds of toy pianos, and she seems to hate them, because she wants her music NOW, and it's a little more than she can do to learn to play them.  I've found she likes toy drums best.  Anyone can drum at a starter level and make an enjoyable sound!  She also SOMETIMES likes toys that play music, but in her case, if the songs are off-key or not sung as she likes, it makes her crazy, so I tend to avoid toys that might do that! 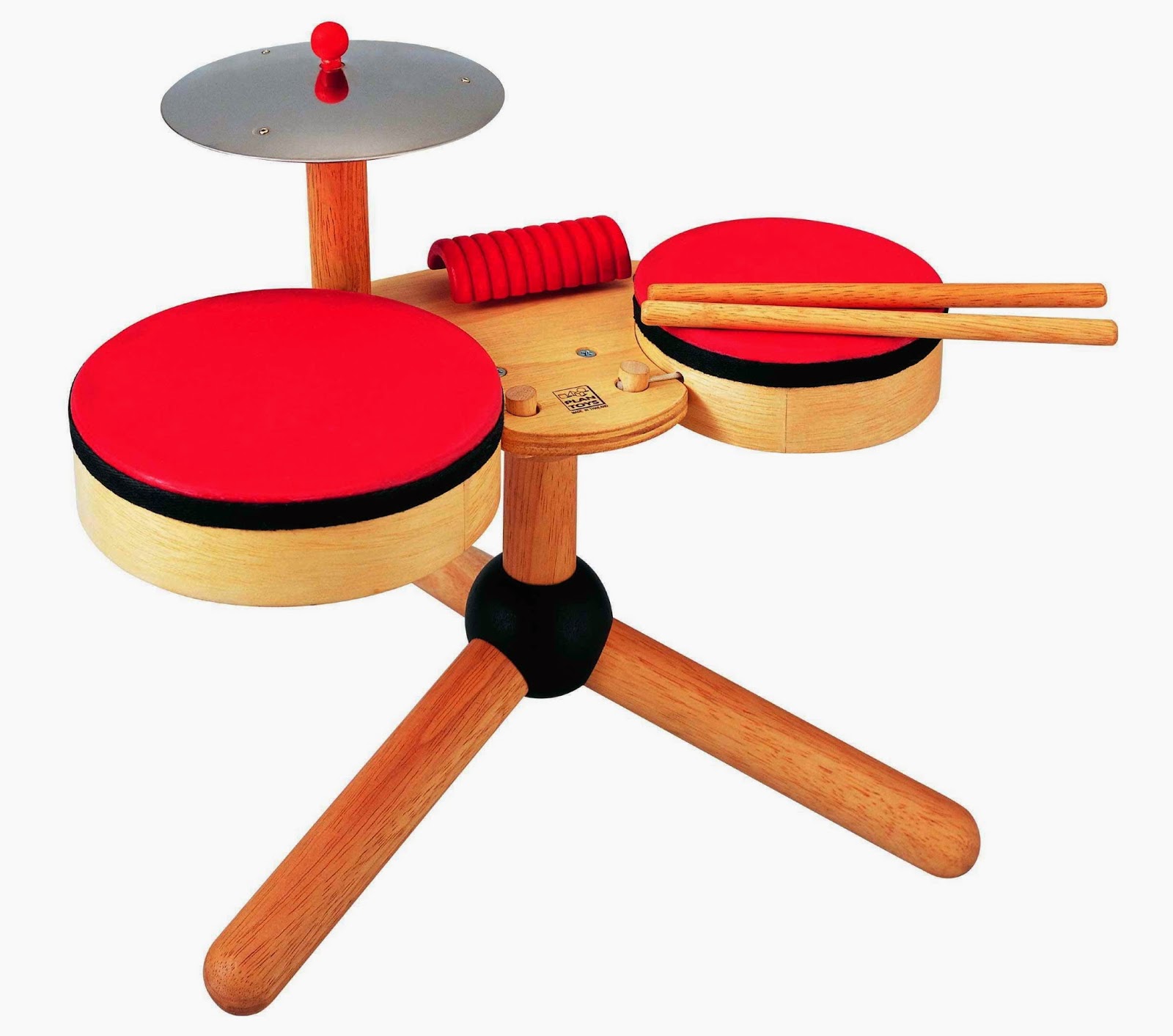 6.  Sensory Blankets  By this, I mean more blanket squares.  These are squares of usually very, very soft fabric, with often tags or other interesting textures sewn in.  They can be held, rubbed, sucked on, used good and hard and then washed.  Janey loves them. 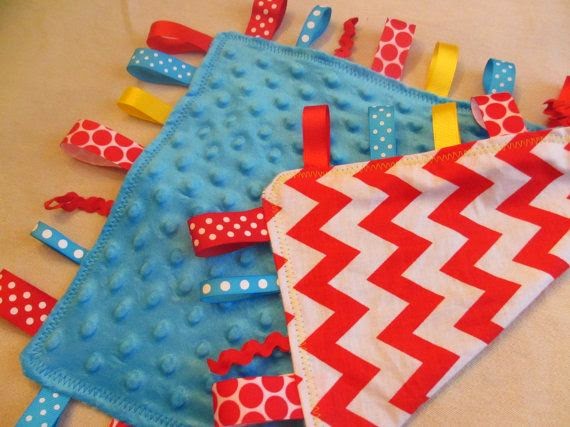 7.  MAYBE Toys  There are a few toys that might be great, but that you would want to check with the parent about first.  They include Play-Doh, bubble stuff and bubble wands and drawing supplies.  You want to make sure the child doesn't eat Play-Doh.  Janey does, very much so.  She loves the stuff, but she loves it like an all-you-can-eat buffet, so we don't get it.  Bubble stuff is great, but again, some kids drink it.  Janey doesn't, but you'd want to check for sure on that one!  And art supplies----Janey has zero interest in drawing, but a lot of kids with autism do like to.  If you get art supplies, keep it simple!  Get paper, markers, crayons---not an elaborate paint set.

DON'T GET  And of course, like with everything I write her, I'm writing from my own experience.  But in general...Don't get things with lots of pieces.  They are going to get lost, or eaten or at the worst choked on.  Don't get games.  Most of the time, kids with LFA don't understand them, and are not entertained by trying to learn them.  Don't get books.  It pains me to say that, because I love books more than anything.  But it's a rare book that really catches on, and most books, especially pretty books you wouldn't want to be ripped up, are just going to sit on shelves.  Don't get videos.  Not that the kids won't love them, because they very well might, but because most kids with LFA already have about a million videos.  Don't get dolls or stuffed animals.  Imaginative play is not the strongest suit for kids with autism.  I do know of several girls that love dolls (I'm think of you, Jamie and Reagan!) but dolls are also pretty easy to find, and another gift would most likely be more appreciated.  And don't get food.  Many of our kids are on special diets.  Recently, we eliminated chocolate from Janey's diet, and I suddenly understand far more than I used to how hard it is when someone brings it into the house!

I imagine this list, strangely, might be one of the more controversial blog posts I've written!  I know I don't speak for everyone.  Please feel free to disagree and add your own suggestions.  But I hope these will help someone trying to buy for the child with LFA that they love!

I realized after reading this post that I am one of those adults who would love a fidget toy. I usually find myself messing around with my nails or my cuticles, but it would be so much better to have a fidget toy. I've stopped to play with those rubber Koosh toy things at Target; if left to my own devices I could stand there for hours just messing with the thing. I'm checking out the Office Playground website as I write this! :)

My sister is 6, and is just recently been able to start using fidget toys. She used to chew on them, destroy them, and end up with small pieces in her mouth that she could then swallow or choke on. She has recently become better about mouthing things, but when she is very overstimulated (the time when she would most need a fidget toy) she is much more likely to revert to mouthing.

Has that been an issue for Janey? I know that some of the fidget toys pictured would be unsafe for my sister still, so I was just wondering.

I loved the post! I agree that all lists of toys for kids with autism seem to just be puzzles or logic games. You can't even fit all the HFA kids in that box, much less the entire spectrum!

That has certainly been a problem for Janey, and I should have mentioned it more! She has gradually gotten better about the mouthing, but in the past, there was no way a lot of fidget toys out there would have been safe for her. There were still some that worked---that is where baby toys worked well, and some of those have a lot of textures and things to move around. At school, they would sometimes give Janey what I think it called Chewlry, things to chew on, and when she was really a biter, she bite up ones that were supposed to be un-bitable, even a special one they ordered for really tough biting cases! I wish they made more fidget toys that don't look like baby toys but that have the safety features of baby toys.

I couldn't agree with this post more. It's so frustrating.....I would do anything if my son actually played with toys.

Can you enlighten me a bit about the Pin Art. How does it work in practice? It looks like something Ville would love.
I completely get the frustration of Angela. Our son likes to adopt an object and then keep scrutinizing it, but he does not do anything with it. Athough he seems to have a very cultivated taste of appearances, but nevertheless...

Pin Art is a bunch of pins, under plastic on one side, which can be pushed in at the other side, so when you put something up to the pins, it makes an impression, like a picture, of what you put there. It's sort of hard to explain well! When I did a Google search for "pin art" just now, the top things that came up were links to some ones for sale, and I was surprised that one of them was for sale through something called "National Autism Resources", so other people must have discovered how much their kids like these! I bet Ville like them too!

Also consider if a toy can be used as a weapon. My preschool kids hit each other with toys, books and anything they can get their hands on. Apparently, they only attack each other as the daycare never reports that they hit other kids at school. It's mostly sibling rivalry and that they lack empathy for each other at this point.