I am a slow learner at times.  If you look at all my posts with the tag chocolate (which you can do here, if you are in the mood), you will see that over and over and over, we have been shown that chocolate has a huge effect on Janey.  It makes her not sleep, it makes her manic, it makes her crazy.  And still, we sometimes let her have chocolate.  I am not sure why, except that she loves it, and that chocolate is all over.  It's a tough thing to totally eliminate.  Another reason, which probably gets more to the root of it, is that I am for whatever reason always overly skeptical of food allergies or sensitivities.  I am not sure why.  My mother and sister have food allergies, which I have seen in action, and I know some food allergies can be deadly.  But still, I continue to follow my general middle of the road type philosophy---a little bit of anything non-poisonous doesn't really hurt.  Well, with all of you as my witness, I am finally going to try to get serious about chocolate.  NO MORE CHOCOLATE FOR JANEY. 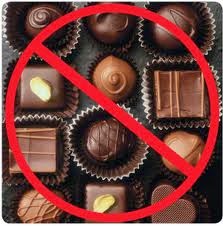 Here's what went down.  On Wednesday, when I took William to work at Whole Foods, Janey and I went in for a bit to get a few things.  She spotted something we'd bought a long time ago---a 12 pack of organic chocolate milk boxes.  I said no, not so much for the chocolate but because I wasn't really there for a big shop.  She handled it.  But then Thursday, again we went into the store, and she led me straight to the chocolate milk, and said "I want chocolate milk.  I want to buy that.  Put it in the cart"  That is a very, very unusually good string of sentences for Janey, and it is almost impossible for me to refuse her when she works that hard to tell me what she wants.  So I bought them.  I wasn't even thinking about how chocolate affects her, believe it or not.  I didn't think she'd really drink much of the milk.  She's been off chocolate milk and milk in general for a while.  However, she surprised me by being VERY into the milk.  In the course of Thursday, she probably had 6 servings of it.  Which I allowed.  Because I am not very quick on the uptake, or something.

So-----Thursday night into Friday.  About 3 hours of sleep, tons of screaming, agitation, tears and fits..  Friday, the 4th---a day from hell.  Screaming all day, no nap really although she hadn't slept, the worst day we'd had in months.  Friday night---very little sleep again.  Also Friday night---finally, the realization---this might have something to do with all the chocolate milk.  The milk was hidden.  Saturday morning---still hellish.  Screaming at the store until we had to leave, screaming at home until we all felt ready to cry.  In desperation, I took Janey for an outing to the Trailside Museum, a little outside zoo/nature preserve near Blue Hill, close to us.  And finally, I think the chocolate was out of her system, or walking around outside helped it get out.  She was a delight, happy and cheerful.  And was so the rest of the day.  And she napped.  And she slept well last night.  And she woke up happy.

Of course, because I am a skeptic, I still am not sure of the connection, but I'm surer than I've ever been about a food connection.  For whatever reason, Janey just can't handle chocolate.  This isn't the case for caffeine. in general.  We often let Janey have some coffee (which is something very common in Italian culture) and although I am not big on soda, she has certainly had a Coke or two, and this doesn't seem to affect her at all.  It's just chocolate.  And even a very small amount, like a few M&Ms, can set her off.  I don't know what might be in chocolate that isn't in other things, but there must be something.

So, from now on, we are going to treat chocolate like she has an allergy to it.  We will not have chocolate in the house.  I will ask the schools not to give her chocolate.  We won't buy chocolate anything.  That won't be hard for me, as I am not a big chocolate fan, but Tony loves it, and the boys like it pretty well, but they can still have it, out of the house.  We'll see how it works out.  If it prevents days like we had this week, it's a small price to pay.
Posted by Suzanne at 9:56 AM

There is something to this. I have a couple of women friends who get migraines every time they eat chocolate. Maybe Janey's getting migraines that she can't tell you about......

When I eat M & M's, I get heart palpitations and shortness of breath, especially after I lie down to try to sleep. That doesn't completely stop me from eating them -- a few probably don't hurt, but it's really hard to eat just a few M & Ms! As you know, Dad has had unpleasantness from chocolate for a good part of his life, too. Your Mom

Chocolate makes your brain feel good but there are obvious downsides with too much leading to cavities and weight problems. Caffeine and chocolate both from cacao and can lead to sleep problems. Despite these drawbacks, I still give some to my daughter as is more focused when she wants it and I can get her to conform better when I bribe her with it. She still asks for Ding Dongs, suckers, ice cream, donuts, gummie bears. . . She's not overweight or a diabetic but her sleep patterns are erratic no matter what she eats unless she gets some exercise. We dilute the chocolate milk with regular milk. The exercise outside is good because it's distraction and my kids will drink water which they don't usually do because they are thirsty and not just sucking down juice with less sugar for kids. Lastly, it runs in the family as my 93 year-old Dad still eats chocolate and ice cream.