On and off day 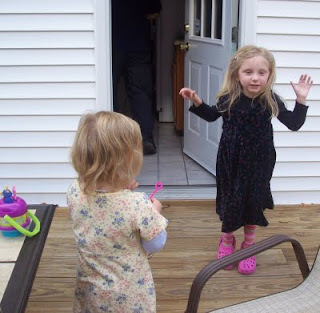 We drove out yesterday to meet my friend Judy, who I had never met on person before, just on the internet. It was wonderful to meet her. I was worried about how Janey would do, as she was going to meet Judy's 3 year old granddaughter Jamie. Overall, it went well. Jamie was a wonderful talker and very advanced, which is nice to see but also always a little hard to see, but she had an outgoing personality and just refused to take "no" for an answer in playing with Janey. They ran around together, danced together, did well without Janey really talking. It was good to see. But then on the ride home near the end she went into crazy mode. She didn't like what we got for dinner, and wanted "cheesecake" which can mean many things---sometimes really cheesecake, other times little packets of cheese and dipping crackers. She just started screaming for it, and I mean screaming so loud you could not even hear yourself think, and thrashing in her car seat and having one of the worst tantrums I've ever seen her have. I really thought she would hurt herself badly. It was awful. We did our best to ignore it, as anything we tried to do just made things much worse. Eventually she wore herself out and was okay. I think being social tires her out so much and makes her so taxed that she has to decompensate. It was a long drive.
Posted by Suzanne at 10:49 AM