Last night, as I spent time with Janey as she went to sleep, I thought about this day a lot.  I thought about it, as people most often think about things, from a very personal viewpoint---that of Janey, and how best to help her through the world.  And I realized, in a lot of ways, helping Janey be accepted, in a full way, involves something that is the opposite of autism awareness.

Taking a step back, I'm thinking of my own view of politics, or really, the larger world.  For the most part, I completely ignore politics.  When I don't, I become easily overwhelmed.  There are so many aspects to it, so many personalities and philosophies and emotions and ideas.  And I can affect all of it very, very little.  I vote, and then I probably actually bury my head in the sand.  I do so not out of apathy, but because I know what I can do and I can't do.  I can't change the world, not in my current life.  But I can do the best I can for my own family, and so I look inward.  I try my hardest to be the best mother I can, to have the best marriage I can.  I don't succeed, of course, but I try.

And sometimes, trying to think about autism as a whole keeps me from focusing on Janey.  I start to feel paralyzed, in writing here and in making decisions for her.  When I look at the media for views of autism, I see little that seems anything like Janey.  The spectrum is so wide that there is almost no intersection between lives like that of The Good Doctor or Temple Grandin and that of Janey.  And I say that not talking about high or low functioning.  I am talking about personality, strengths, interests.  Janey is not part of a group.  She is herself.

What I have found, over the years, is that people who most accept Janey are people who most know Janey, as a person.  In a big way, that includes us, her close family.  I don't look at Janey thinking about autism, 99% of the time.  I look at Janey as my daughter.  Like every other person on earth, she is a mixture of many things.  At times, she is a delight beyond imagining.  At times, she drives me out of my mind.  I can say exactly the same things about her brothers.  Her autism doesn't make her who she is, any more than Freddy's asthma did or William's premature birth did.  It has affected her life, sure, very much so, but it's not the essential Janey-ness of her.

I've had on occasion over the years a telling reaction from people meeting Janey for the first time that knew ahead of time she was autistic.  It's a surprised reaction, followed by them saying "But she's so beautiful!" or "But she is so happy!".  Or, a few times, "But she's, well....(and here they don't use the forbidden terms but say in their own way that she's intellectually disabled)"  These people were, before meeting Janey, what they considered aware of autism.  They had awareness that led them to believe Janey would somehow look different than the norm.  They are surprised when they see a lovely, happy girl.  Then they are surprised she doesn't talk like a doctor or a PhD, that she isn't quoting train statistics or holding court on some focused high level math concepts.  Autism awareness has failed them.

To accept Janey fully, to accept all of our girls fully, and in fact everyone fully, we need to see them with non-pre-aware eyes.  We need to see them as they are.  Janey isn't an example of anything.  Janey is a person.  Like everyone, she has some special needs, in the most literal sense of that word, and her particular special needs are ones that society doesn't readily provide, so we need to help her more than we would others.  But if we look at her with fresh eyes, those not pre-filtered with autism awareness, we see her---a 14 year old girl, one who loves music, loves car rides, loves dancing, loves running around in fresh air.  One who doesn't communicate verbally very effectively, one who needs help with many life skills, one for whom academic skills are at a very low level.  One who delights those around her with her enthusiasm for life, one who is the most adventurous eater I know, one who last night hugged me tight and said "Love you!" 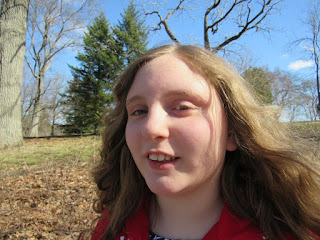