A dream of a race

The other night, I had a dream about a race.  In the dream, as often in my dreams, I was a very good runner (in real life, I simply can't run at all).  The race was being held in a Nordic kind of place, on a snowy road.  I was near the lead when we came to a very steep hill.  I told myself I'd get up it fine if I kept my eyes closed, so I didn't notice I was on a hill.  That strategy was going well, but for some reason I opened my eyes, and I couldn't go on.  So I turned around and ran the opposite direction.  I felt unsure about this, wondering just what the procedure was for running a race backwards.  I stayed close to the edge of the road, as to not get in the way of the runners going the right direction.  The dream ended after I got back down the hill, still running.

I'm a heavy dreamer, with almost every night featuring dreams, usually even more complicated than this race one.  But the race has lingered in my mind, and I'm starting to see it as an analogy of my life with Janey.  Not that I think my mind was thinking up analogies in the night, although who knows?

The running with my eyes closed part, to keep from realizing what a steep hill I was on...well, I do that a lot, figuratively.  One way is by not being around typical kids Janey's age much.  Of course, I know that most 14 year olds can talk well, read well, are fully toilet trained, are starting on the path to adulthood.  But by just not thinking about that, I can keep from comparing Janey, and comparing is one of the few things I can say very strongly not to do.  I keep my eyes closed in other ways too. In a way, I also don't compare my life to other 53 year olds like myself.  Maybe of them are starting to see the light at the end of the tunnel of childrearing.  They are seeing grandchildren, going on trips, looking toward retirement perhaps.  They are able to do such things as eat out for dinner.  They can attend college graduations without needing to worry about childcare.  They are at a different stage of adulthood than I am.  But if I don't think about that, don't compare, my life seems, well, just my life.

When I do open my eyes, at times a despair washes over me.  I feel, like in the dream, that I can't go on like this.  I am overwhelmed.  So mostly, I just don't think about the parts of my life which have so much left the mainstream.

Then---racing backwards.  Being on an opposite path, running the same race but in the other direction.

Life with Janey, as it races on, is often like an opposite race.  We aren't preparing her for college.  We aren't thinking ahead to her life on her own.  We are preparing to care for her for always, and if we look to the end of the race, it's a scary thing.  There is not much of a set path for an opposite race.  Sometimes it does feel like we are on the edges, staying out of the way of the regular racers, the ones heading steadily to the goal.

But in the dream, I recall seeing how lovely the snowy path was, even as I ran it in the opposite direction of the other runners.  That, too, is true.  I've followed the news of celebrity college cheating with a bit of a feeling close to snugness.  I don't have to worry about that.  I read about parents struggling with homework.  Janey doesn't have homework.  I hear about the pain of breakups, the worry about girls out on their own, the body image issues...and I can feel truly glad those aren't part of my life.  Not glad for Janey, missing the highs that go along with those lows, but glad purely selfishly for me, for the more intensive but vastly different parenting she requires.

I often like to search for an image to go with my posts.  I tried and tried to find a picture that looked like the hill in my dream.  I wish you could record dreams---maybe someday soon!  But until then, I'll include a picture of Janey I took this morning.  I guess dreams are like lives.  You never can quite see what another person's dream is like.  You can never quite live another person's life.  We can just live our own, and do our best with the particular path we are following. 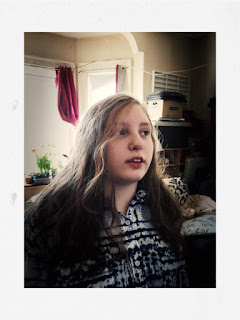