The count of five is the best 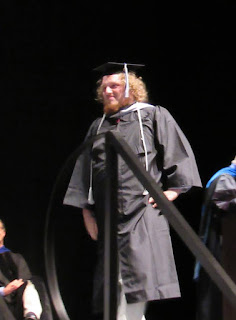 This past week, I've been thinking over and over how my favorite times are when the count in the household is five---when all three kids are around.  It's crowded, it's loud, it's food consuming and endless dishes and lots of arguments and loud music, and it's fantastic.  It's wonderful.  Being a mother to three very different and very cool kids (or two adults and a kid, now!) is my dream come true.

I've also been reflecting, though, on how autism affects the family count, the family unity.  I'll say the right things and mean them---I think we are all better off than we would be without Janey.  I think she gives our life the salt, the spice, that makes it more than it would be otherwise.  I am pretty sure her brothers and Tony would agree.

However, it also makes it very hard to be a family of five anyplace but at home.  We were very lucky for the graduation weekend.  My parents came down and watched Janey during the morning graduation, so Tony and I could go with Freddy.  When we picked up William and drove him to the ceremony, we all noted how odd it felt to have the four of us in the car.  It's the combination that just about never happens.  Someone is always at home with Janey, or if she is with us, usually the boys aren't.  But we were able to attend, and that was great.  My friend Maryellen was even there as a backup, if something had gone wrong with the arrangements.  But I wish...I wish Janey could have been there too.  And of course she COULD have, but in many real ways, she couldn't have.  She would not have stood two minutes of ceremony.  No-one around us could have listened to the speeches.  One of us would have had to leave, to take her outside.  And the focus would not have been on who deserved it at that moment, William.

For a rare event like a graduation, I accept that we will rarely number five.  But I wish that we could do more as a whole family for the more minor events---a dinner out, a visit to friends, a movie or outdoor concert or trip to the beach.  A lot of why we don't has nothing to do with Janey, and much to do with the big age divide in our family.  The boys are no longer at home most of the time, and when they are, they are often working or with friends, and that is how it should be.  But even when they are around, the simple fact is that very few places are possible to go to with Janey.  Or they are possible if one of us is primarily a caregiver, and ready to leave at any moment.  It's nobody's fault.  It's just the way it is.

And so I treasure the times at home when we are all together.  I treasure them more than I can even explain.  Yesterday morning, Freddy came down for breakfast (more like lunch, as he works late).  The rest of us were eating and talking.  Janey ran over to Freddy and said "It's Freddy G-mara!" (a jokey way we say our last name sometimes)  We all laughed and laughed.  Then I said "It's great to have you here with both your brothers, Janey" and she said "My brothers!  William and Janey and Freddy!"  I started tearing up.  I felt like at that moment, she was grasping something she never quite has before---that she is one of three kids, one of Tony and Suzanne's children, one of the Amaras.  That is what I want for her more than anything on earth---to be part of it all, to be an equal and included member of the group.

I'm going to hold onto the moments this summer we are all together.  William heads to Chicago to graduate school in the fall.  Some day, both boys will perhaps have their own families.  Maybe, if we are lucky, we will have grandchildren.  But the moments we all five at home---those are the moments that make me wish I could save time in a bottle.

I fully understand why Janey wasn't at the graduation ceremony. My daughter had make noise even at my son's kindergarten graduation. Nothing like a dozens of heads turning at you to make you feel small but the ceremony went on. My daughter had to skip my Dad's graveside funeral for the same reason so it's not something I'll forget but it's not her fault.

"Then I said 'It's great to have you here with both your brothers, Janey' and she said "My brothers!  William and Janey and Freddy!"  I started tearing up." That scene almost sounds like something you'd hear in a movie- a good movie.

I notice people who have kids younger and are becoming independent adults lament that the are headed for "empty nester" status with exception of Janey I assume. My brother's kids will now be in college or just graduating. I'm in a hurry to see my kids grow up but my youngest will only start kindergarten next fall.