Autism and Routines, with thanks to Naoki Higashida

I recently got a chance to review the latest book by Naoki Higashida, a Japanese man with autism who writes by means of pointing to letters on a letterboard.  I'm ashamed to say I've owned "The Reason I Jump" for years, and hadn't read it until now.  When I got the new book, "Fall Down 7 Times Get up 8", I read them both. 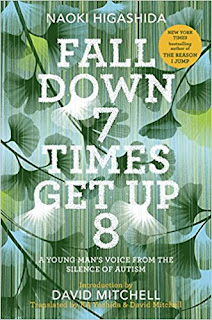 The books were not what I expected.  They were far more helpful than I'd expected, and more nuanced.  The author is very honest, and the books are far from all positive---there are many parts of being autistic that he says are very painful.  He sounds much like Janey in terms of his verbal speech and his level of independence.  That doesn't mean that she is like him, any more than I'm like others who speak at my level, but it's a chance to get a glimpse into the mind of someone with more insight into Janey's mind than most.

I won't go over everything about the books---you can read them if you want to.  But what I want to talk about is what I learned about autistic routines, both from the books and from applying what I read to what I've seen in Janey.

Higashida explains (and I'm paraphrasing here) that routines are not really a positive or negative thing.  It's not that they bring him pleasure or make him upset.  It's more than they simply MUST be done.  They are like breathing or eating.  Once something is established as a routine, it feels essential to follow the routine.  If someone tries to prevent this, it's extremely upsetting---again, not because he enjoys the routine so much, but because it feels like something vital is being stopped.

From this, I thought about how routines get established.  We establish routines all the time, often without realizing it.  For example, if Janey goes onto the bed and wets it during the day, our next part in the routine is to get upset, to remind her we always go in the potty, and to change the bed.  By following our parts of the routine, we further set it in place.  I can see how that goes.  If Janey feels the need to urinate, she starts her part of the routine---go to the bed.  We follow our parts---get upset, remind her, change the bed.  The routine to her isn't what it is to us.  She doesn't see it as "IF I wet the bed, THEN they will get all upset, SO I shouldn't wet the bed"  She sees it as a series of events that are linked.

It's making me think that one of the big keys to both Janey and us being happy is to do everything to keep routines that make us unhappy from being established, and do everything to make routines that make us happy established.  I've done this sometimes, without thinking of it as such.  For example, after school used to be a hellish time often.  I thought about what after-school things are positive for Janey and for me.  The first part of coming home for her is always taking off her shoes and going to the refrigerator and looking for a snack.  Now, I always have a snack she will like waiting for her to find.  Before, I'd wait for her to ask, and if she asked for something I didn't have, the routine was for her to freak out.  Now, since she does the looking, her routine is to eat the food she likes that is there.  Next, she watches a video.  Before, if I was in the middle of something, I'd tell her to wait a bit to put on the show she wanted.  Then she'd scream.  Now, I make myself available when I know she'll want a show, and put it on right away.  The routine now is to watch the show happily, and my routine is to get to sit there and read or knit.  We are both happy.

It's my parts of the routine that I can change.  Much of the routine for her is reactions to things I do.  It's FAR easier for me to change the things I do to get the reactions I want from her than it is for her to change her routine.  I think this is where I often used to get tripped up, and where things like ABA don't really take into consideration how the mind of someone with autism works.  We think in terms of actions being modified by feelings.  If someone reacts angrily, or someone gives you a treat that makes you happy, we assume that will change the next step.  We think of thoughts like this... "Mama waited to put on the video because she was busy, and when I screamed, she said she wasn't putting it on because I was screaming, so next time, I won't scream"  But Janey thinks (I believe) more like "First I ask for a video.  Then Mama says not right now.  Then I scream.  Then I wait a little more.  Then later Mama puts on the video"  Janey's screaming is part of the routine.  But if I am available to put on the video right way, I switch Janey to a new routine, a branch in the other one, one where she happily watches a video and I don't have to hear screaming.

So much of what has worked over the past few easier years has come about by what many would probably see as us "giving in" to Janey.  What I think people who see it that way don't get is that we ALL are much happier.  Why is "giving in" seen as bad?  I think it's because we again don't think the way Janey thinks.  We think of someone more typical, someone who might think like "So if I make a fuss, I get what I want.  I need to use that!"  Janey doesn't think that way.  She doesn't generalize that way.  She thinks in terms of the sequence.  The sequence can include screaming or not, but it's not a cause and effect in her mind.

I might not be explaining this as well as I wish I could, but in my mind, it's been a bit of a breakthrough. Higashida explains routines much better than I do.  And I very much appreciate how hard it was for him to write the books, and I thank him for doing so.  His insight is going to make at least a few lives, those of our family, easier and happier.
Posted by Suzanne at 8:42 AM

I love this post, and I loved Naoki's first book. I didn't realise there's a second - I definitely have to look into getting that!

I wish that more people thought like you do about the way brains like Janey's work. I definitely agree that instead of thinking 'if I do this - this will happen', it's more 'I have to do this for this to happen'. I really don't think that a lot of thought is manipulative, but I also know that autistic people can often repeat behaviours a certain way because it causes a reaction which makes them laugh - Often because it is funny when we do some things, and sometimes if you take a minute to sit back and think about how we respond, and what we've learnt is 'socially acceptable' you can see the funny side.