Trying to radically accept myself

Although I fall far short, my favorite philosophy in parenting Janey is radical acceptance.  I want to accept her as who she is, not try to change her.  I want to delight in her special qualities, without the special being a "special" as seen in "special needs".  I want to be frustrated with her as who she is, not who society feels she should be.  I want her to be herself.  I read a good blog post about this today (read it here) and it got me thinking a lot.  I want to radically accept Janey, but lately, I'm having a very hard time radically accepting myself.

Last summer, I spent a day being researched upon by the Framingham Heart Study.  If you don't know about them, it's worth following the link to find out more.  My mother's family is from Framingham, and I feel lucky to be part of the 3rd generation of my family to participate in the landmark study.  It's mostly about the heart, as the title would imply, but this time, they also included a liver scan, something called a FibroScan.  Usually you don't hear about your medical results from the study, except for a sheet of basic information like your cholesterol reads, but if something fairly major is detected, they let you know.  About two months after my day there, I got a letter saying that the liver scan showed a high possibility of significant scarring to my liver.

That letter sent a chain of appointments and tests into action, the most recent one being a liver biopsy, the gold standard of liver tests.  It gave me a diagnosis---something called NASH (non-alcoholic steatohepatitis).  Basically, that means my liver is inflamed and scarred by means of something other than alcohol.   It's a strange disorder.  No-one knows exactly why you get it, and there is no treatment.  It's just---there.  Sometimes it doesn't progress further (although it in itself is a progressed stage of something called fatty liver) and sometimes it does, leading to cirrhosis, which also has no cure, except a liver transplant.

There aren't too many symptoms of NASH, but the top of the list of the ones they are is fatigue. Just by luck's draw, I have two other medical issues which also cause severe fatigue---a thyroid which works almost not at all, along with what is most likely Sjogren's Syndrome.   The result is a kind of tiredness that is hard to even explain.  I wake up fine, and I'm fine for about three to four hours.  And then I get tired---so tired that I almost always have to take a nap.  I'm okay for a few more hours after that, but then again, very very tired, tired in what I think of a bone-tired way, tired right down to the roots of me.

As I lay in bed a bit ago, worn out from a trip to the grocery store and some minor laundry, I was cursing myself.  I hate the tiredness.  It makes me feel like a lazy loser.  I get so little done.  I do what for most people would be a normal morning's chores on a light day, and I'm ready to collapse.  As I lay there, reading the blog entry I linked to earlier, though, for just a second I thought "I have a reason for this tiredness.  I don't have to hate myself for it.  I can do what I want to do for Janey.  I can radically accept myself"

It's hard for me to accept myself at all, to say nothing of radically accepting myself, but I think I'm going to need to start trying.  That's partly because I can't seem to think my way out of the physical issues I have, and partly because to be the best mother I can to Janey (and to William and Freddy), I need to.  If I didn't rest during the day while Janey was at school, I couldn't do much for her when she got home.  My health issues are part of me.  They are part of what I need to accept. 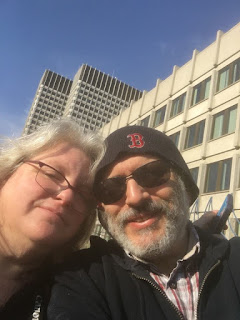 I'll close with a picture of Tony and me, taken in front of the building where we met at work many years ago.  I don't like how I look in pictures, but I'm going to try to start radically accepting myself there too.  It's a work in progress.
Posted by Suzanne at 3:10 PM