I took Janey to a parade yesterday, along with my friend Maryellen.  I don't think Janey has been to a parade since she was three or so.  Overall, she loved it.  Parades pretty much have Janey's favorite features---music, dancing, being outdoors and able to move around and be loud if desired, all that. 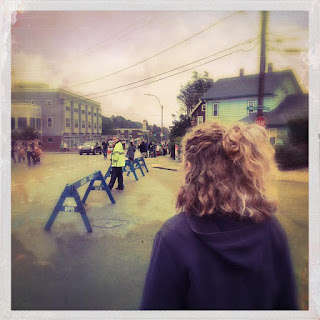 For me, a few parts of the day were bittersweet.  A dance troupe played a huge part in the parade, a troupe from a big local dance studio.  I'm not a dance person, but I am pretty sure if Janey had followed a more typical course in life, she'd have been involved in dance.  She's amazing, in that she instantly copied every dance style she saw during the parade and did her own dance at the side of the street.  She got many smiles and waves with her high enthusiasm and her moves.  It was something watching her, doing something I couldn't do for the life of me.  As I watched the literally hundreds of young girl dancers go by, I kept thinking "Why isn't there a place for Janey among them?"  I found a list of dance programs in the Boston area for kids with autism.  I'm glad there are some, but like I've found so often, they aren't for Janey.  Here's what one of them said is a requirement for participating--- "Students must be able to participate effectively in lessons or classes and maintain an environment that is safe for themselves and others."  Yeah.  Janey isn't going to participate "effectively".  She would probably not "maintain" the environment they are looking for.  She would love the class, she would probably learn, but as several of the five for so programs explicitly said, they are looking for "high functioning autism" kids.  And sometimes, I get mad about that.  They have every right to accept who they want to, but damn it, I wish there were programs that said something like "We will work with children at any level of functioning, if they have a love of dance"

I felt encouraged by much of Janey's behavior during the parade.  She's still been in a bit of a manic phase, and the weekend was trying at points, with her often going over the top from excitement to anger and screaming.  But a few years ago, I would not even have attempted something like this parade, even with the wonderful help of Maryellen.  As we walked toward the parade route, Janey ran ahead of me a bit, and I felt so happy she is able to do that now, and I know she will stop when I shout out to her to do so.  She's able to have that little bit of independence, which is a very nice thing for a 12 year old.  She stayed with us at the parade without having to have her hand held, and she seemed to understand that she needed to not go into the street where the parade people were.

There was one moment, though, when I was quickly reminded that I need to always be on guard with Janey.  Maryellen had an umbrella, as it was drizzling.  Janey wanted to hold it, and we think to twirl it on the ground.  Before either of us completely realized what was happening, she moved close to a couple small children and started wildly flinging the umbrella around.  It could have very easily poked and hurt the kids.  We grabbed it, apologized and folded it up.  But she is so fast that it's scary.  Sometimes I'm almost lulled into relaxing for a minute when we are out and about, and I just can't.

Janey watching the parade is in many ways a metaphor for what increasingly frustrates me about life for a child like her.  She can watch, she can enjoy, but she can't really participate.  She dances on the sidelines.  And even on the sidelines, I can for a few minutes just feel like she's any other parade watcher, but if I let my guard down, things can suddenly turn.  I can't ever relax.

Because I am always arguing back and forth with myself, I'm of course thinking "She doesn't know she isn't participating.  She is happy dancing on the side."  And that's true.  Fine.  But imagine Janey belonged to almost any other distinctive group of kids.  And imagine that the group she belonged to was a group simply not welcome, not included, in basically everything.  In the past, we might have said "That's just the way it is.  It's too hard to include that kind of kid.  They don't need to be included to be happy."  Well, sometimes I have a radical idea that Janey SHOULD be able to be included in ANYTHING that other kids are included in.  Or at the very least, if there is an activity that is said to be for kids with special needs, or even specifically autism, that it should include ALL kids with autism.  Sure, it would take some doing.  But why not?  Why can't it be that way?

I do live in the real world.  I think often of Janey's old school, which tried harder than anyplace to live that dream of including all kids, and in the end, wasn't able to do that for Janey.  And thinking about that, even after several years, can make me cry.  I don't have solutions, or answers, really.  I accept, at many levels, that in the real world the challenges of Janey's behavior do leave her out of the mainstream.  But sometimes, I dream of a world where she's truly and totally included.

Suzanne, I know you're a peaceful person, but, really, a program that is receiving federal funding, or that is part of an after school program, is not allowed to discriminate against children on 504 plans, which I'm assuming Janey is on. The program may be able to prove that the cost of including her would overwhelm the program, but my guess is that the cost of including Janey is just the cost of a one-on-one aide, hardly a substantial cost. Here is an interesting discussion of the issue: http://www.wrightslaw.com/info/sec504.afterschool.crabtree.htm

Even though you are a very peaceful person yourself, realize that you may be helping open some of these programs to other children as well. I can't believe one had the nerve to put this in: "Students must be able to participate effectively in lessons or classes and maintain an environment that is safe for themselves and others." It reminds me of when I was selling real estate and doing rentals. My landlords would occasionally say things like: "I don't want children. Put in the listing that the tenant cannot have children." And I would have to inform them that refusing to rent to families with children broke Fair Housing Laws, and I could lose my license if I did that. Or the landlord would tell me not to rent to a family with children under five, so he wouldn't have to worry about lead paint. No. Sorry.

People running these programs probably have no idea that they are not allowed to discriminate. But they need to learn this.

I am still really enjoying your blog. I think Janey is very lucky to have you as a parent.

Suzanne, this sounds really hard. And I'm sorry that your sweet girl is continually being denied something that she seems to really enjoy--and it sounds like Janey has a real talent for dance! I'm assuming you have already looked into the Boston Ballet Adaptive Dance Program, with a class specifically for people with autism....but just in case, here's the link: