I just finished reading "Rosemary--The Hidden Kennedy Daughter" by Kate Clifford Larson.  It's a very well written and fascinating account of the life of Rosemary, the eldest daughter in the family that included JFK and Teddy Kennedy.  My mind is swirling with thoughts about the book and her life.

There were really two lives of Rosemary.  One is before she had a lobotomy, one is after.  Before, she was what I'd call mildly intellectually disabled.  Certainly she could do many things Janey can't---read at a 4th grade level, write letters, talk quite well---she functioned well enough to be presented to the Queen of England without anyone realizing she had a disability.  But then, as she entered her early 20s, mental illness started to complicate her life.  She became angry and aggressive, and it became harder and harder to accommodate her needs.  Tragically, her father decided to have her undergo a lobotomy, which went horribly wrong.  After that, Rosemary was severely physically and mentally affected. She did recover slightly in some ways, and occasionally did speak in sentences, and although she lived out her life in a house on the grounds of a nursing home, cared for by devoted nuns, starting about 20 years after the procedure, she did quite often visit her family and was part of their lives, until she died in her late 80s. 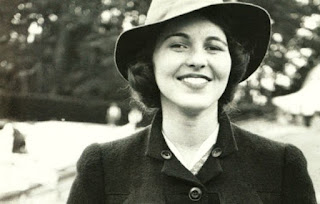 Several things struck me very much about her story.  One of them is how even having all the money and power in the world wasn't able to substantially change her functioning.  Sometimes I think "if only I had the money to get Janey the very most cutting edge care, all the devices and lessons and private schools and aides I could imagine..."  But in reality, I truly feel that most of us, Janey and Rosemary included, learn what they are able to learn and do what they are able to do if they are loved and given the chance.  You can make sure they learn what they are able to learn, but you can't really change what that level of ability is.  When I look at other kids I've met at Janey's schools, I see that.  Some make tremendous progress.  Some don't.  They are given the same kind of teaching, the same kind of opportunities, but in many ways, we are all going to be who we are going to be.  And that's not a bad thing, necessarily.  It leads me to what Rosemary didn't seem to get from her parents---acceptance.

Rosemary was moved from school to school, from program to program, in hopes of making her "normal".  When I look at what she was in her early life, I have to admit I think I'd be thrilled if Janey was able to do the things she could do.  But I don't think it ever was considered to just work with what she had, to say "let's find a way to give her a good life with the abilities she has right now"  I wonder if that had a part in her lashing out eventually.  I think about what it must feel like to be constantly pushed to do or learn things that are beyond one's ability.  If someone decided to spend all their time trying to teach me calculus, or even legible handwriting, or gymnastics, or hairdressing, or a number of things I can't do and I honestly don't think I'm capable of doing, I can't even imagine how upset I'd feel after just even a few hours.  If this went on for years, I think I'd be very, very ready to lash out in any way necessary to get it all to stop.  I don't blame her parents.  In many ways, they were ahead of their time.  They wanted to give Rosemary the best life they could, and in their time, that would be by making her not disabled, and like so many desperate parents, they did everything they could to try to do that.

There's a fine line, of course, between teaching someone what they CAN learn and not pushing them to do what they CAN'T learn.  I know it's sometimes impossible to know where that line is.  But I think our kids let us know.  Janey learns eagerly, when she is able to.  I have to trust her enough to believe that she isn't trying NOT to learn.  I have to believe that the fact she can't read or usually talk in full sentences or be completely toilet trained after many, many years of working on those things means that to some extent, there is a reason she can't learn those things.  It's not giving up to admit that, I don't think, any more than it's not me giving up that leads me to say I'll never be a mathematician or a gymnast or a hairdresser.  It's a matter of deciding whether to go with strengths or not.

In the end, although Rosemary's life story is very sad in a lot of ways, I was hugely touched by something her sister Eunice, founder of Special Olympics, said in a speech in 2007 "Tonight, I want to say what I have never said before: more than any one single individual, Rosemary made the difference"  She was referring there to her influence on her brother's presidency, but in many ways, the fact that she was part of a hugely influential family who devoted much time and energy and money to helping the disabled means that she made a difference for probably millions of lives.  She mattered, as does Janey, as do all our daughters and sons with disabilities.
Posted by Suzanne at 12:16 PM

I too was moved by this book. You are very wise.