Growing up, I'd say Halloween was my favorite holiday.  I vividly remember counting the days until it arrived each year, as most people count down to Christmas or their birthday.  I loved it for the candy, of course, but also because it felt like a day that usual life took a turn.  You could go to people's houses, knock on their doors, and they would give you candy.  Since we lived in the country, my father drove us around town, and our haul was limited a bit by that, so I used to daydream about when I would have kids, and we'd live in an area with LOTS of houses, and they could trick-or-treat the night away and come home with HUGE bags of candy.  That did happen, for a few years with the boys.  But kids grow up and either don't go out any more, or go with friends instead of parents. 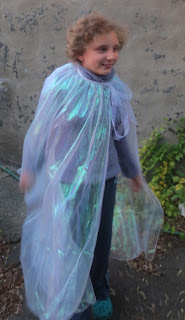 Janey never really warmed up to Halloween in past years.  She didn't much like dressing up, and she wasn't terribly motivated by candy.  I didn't push it.  I wished she would be interested, but she wasn't.  Last year, Halloween came right before the very worst time ever, when she was really breaking down.  We went to one house only, our next door neighbors, and she was done.  A few others years, we didn't even try trick-or-treating.

This year, I signed Janey up for a Halloween party put on the autism support organization for our area, for the 30th.  We went last weekend to get a costume.  I let Janey pick what she wanted, and she pointed to a shimmery long cape, overpriced, but I got it anyway.  I didn't get any hats or masks or other accessories, because a cape is about all I figured she'd tolerate wearing. 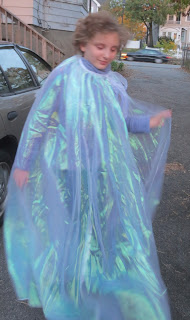 We went to the party last night.  It was not a hit, but not a disaster, either.  We stayed about 10 minutes.  The room was hopping with kids and adults.  We got there about half an hour after it started, which I thought would be good, as I knew Janey wouldn't want to stay the whole time (2 hours) but that might have been a mistake, as things were so crowded once we got there.  It was set up to have volunteers take the kids while the parents sat at the edges of the room.  I liked that idea, but I knew in practice it might not work with Janey, and it didn't.  The room was set up in activity stations, with the idea that each child would do an activity and then get candy at each one.  The first activity was decorating a treat bag, with coloring and writing a name and stickers.  Janey can write her name, sort of, under ideal circumstances, but not with a stranger in a noisy crowded room, and she doesn't color.  So they lost her quickly, and she ran over to us and said "want to go for a car ride?"  We tried to get her to stay a little longer, but it was obvious she was done.  In keeping with our new philosophies, we left, although I have to admit I was disappointed.  It is hard when she doesn't tolerate things that are specifically for kids with autism, and I'm always surprised how many kids with autism seem to be having a great time at them.  I love it that parties like this one are available, and I'm glad we went even for a little while, but still...it's hard sometimes when even in the world of autism, Janey stands out. 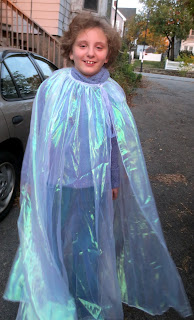 After the party, I wasn't hopeful for trick-or-treating, but I really wanted to give it a try.  First, I took Janey to our next door neighbor's house, the one house we did visit last year.  Janey has had the urge to trick-or-treat there almost every day since, and it's hard to convince her that it's a once a year thing!  So she was very happy to go back there!  They are so sweet and kind to Janey.  We are lucky with our neighbors on both sides.  Then, we went over to my friend Maryellen's house a few miles away.  I figured at least Janey would be able to trick or treat there.  Once we were there, I decided to try taking her to a few houses around their neighborhood.

And that was...wonderful!  I am still almost in tears over how well it went.  Janey was excited!  She marched eagerly along, going from house to house, taking a piece of candy, sometimes saying "trick or treat" and sometimes saying "thank you!" but always smiling and flapping with excitement and singing to herself.  Everyone noticed how happy she was, and we got absolutely nothing but positive looks and comments.  It was like a dream.  These weren't people I knew---they were Maryellen's neighbors, not mine, and they hadn't met Janey before, but they were to a person kind and sweet to her.  We went around for about 20 minutes, picking up lots of candy, and stopped while Janey was still very happy.

I think as Janey gets older, in some ways, people accept her more.  I didn't say to anyone that Janey was autistic, but I think everyone knew.  She is almost as tall as I am, she looks older than her actual age, but I held her hand all the time, and spoke for her when she didn't speak.  And when Janey is happy, there is something about her that draws people to her.  I might just be saying that because she is my daughter, but others have told me the same thing.  She is so blissfully happy, so purely happy, that others are happy being around her.

This has turned into one of my longer blog entries in a while!  I'll stop for now, and just say Happy Halloween to everyone.  And say---keep holding out hope.  When I look at how Janey did tonight, I am amazed.  It might never go this well again on Halloween, but I have tonight to remember.

I am so happy for you - and for Janey too of course - that she enjoyed trick-or-treating so much! I love that shimmery cape; it reminds me of the cape of one of my She-ra action figures that I had as a kid. Very super hero/princess type, it's got attitude!

We didn't get any kids on our door tonight, which I have to admit was something of a disappointment to me. I love seeing the little ones in costume. But we live on a block that only has 3 kids under the age of 5 that we know of (who didn't go out), and our house is wedged between a tree removal business and a condo complex so we're kind of secluded, in a way. If Janey had come over, I would have really enjoyed seeing her! And I would've given her extra goodies too. :)