Out of the Blue

We've been on a pretty good run with Janey lately.  She's settled into the school year routine, and has been fairly cheerful for a good long stretch.  It's been nice.  The time change did result in a sleep issue, where Janey wanted to go to bed about 4 in the afternoon and then wake around 1 am for the rest of the night, but that gradually seems to have gotten better.  It's times like this when out of the blue incidents truly can shake us up.

Yesterday here in the US was Veteran's Day, one of the few holidays that don't attach themselves to the weekend, but occur on the same date each year.  So we had the weekend, and then a day of school and work, and then a day off.  That is never a good scene with Janey, but she did fairly well yesterday.  Daddy was home,which is always a plus.  She was very eager to get out of the house, and we went to a few of her favorite places---Whole Foods for some "ham", which is actually a hugely expensive kind of salami she can always find there, and ToysRUs just to walk around and look at toys and find the few toys she already owns and play with them, to the exclusion of the millions of others toys.  So a typical day.  She slept fairly well, and we were looking forward to this morning, getting back in the routine.

All I can think of is that Janey felt today should be a weekend day.  After all, yesterday felt like a Saturday, albeit a strange Saturday after a one day week, so today should be a Sunday.  When it became evident I was trying to dress her for school, she went ballistic.  Every piece of clothing I tried to put on, she violently took off.  She arched her back and screamed at the top of her lungs "DADDY!  DADDY!"  So Daddy came in and tried to dress her, with similar results.  She is strong, and if she doesn't want to be dressed, she doesn't get dressed.  For 10 minutes, we struggled to get her into her clothes.  The screaming was deafening, she flailed out over and over, she was in a fury.  She tried to hit us, she lunged at us, she hit her own head over and over.  Finally, I think she just wore herself out, and we managed to get the clothes on.  Just in time, as I only was able to quickly brush her hair and teeth before the bus arrived a bit early.  I hope very much she stays calm for the day, but who knows? 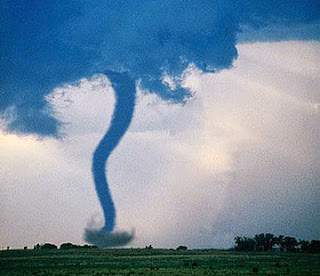 I took a deep breath after she was on the bus and thought about the whole incident.  I tried to tell myself she's been quite good for weeks now, and that I should not be so bothered by the tantrum.  But I was.  I think it's the out of the blue nature of these fits that makes them so tough.  She goes from calm to absolutely 100% fury and fight in a matter of seconds.  The mind and body have trouble adjusting to that.  And I can imagine how it feels for her to feel that out of control.  The intensity of these episodes are such that I think in most childhoods, they would be something that would happen only once or twice, and be remembered always.  But with Janey, and with many kids like her, they happen often---not on a regular schedule you can prepare for, but suddenly.  It's like if a day was perfectly sunny, and suddenly a tornado touched down and ripped your house apart, and then lifted and was gone, leaving you stunned.

It's sudden explosions like today that make it  hard to ever totally relax as a parent of a child like Janey.  A day can be perfect, but there is always the knowledge it all can very suddenly blow up.  It causes a stress that never completely goes away.  It is a drain on optimism.  It must make life for Janey, even more than for us, feel like a walk in a minefield.
Posted by Suzanne at 7:18 AM

I'm sorry that you had to go through this! It really must be difficult to "bounce back" sometimes from episodes like this, if at all. You may not feel strong at times, but you've definitely got a strength that I myself know I don't have!

We have the same thing with olivia - she is strong too and only going to get stronger! I hope you managed to recover from that. Big hugs!

The tornado analogy is so correct. Ha ha. Age will rip thru the house and leave this huge mess in a matter of seconds. Screaming, breaking stuff. Banging her head. Attacking us. Boom. It at the time seems forever then looking back it was literally a couple minutes. And after she acts like nothing happens. Always wonder what's going thru her brain during these moments.