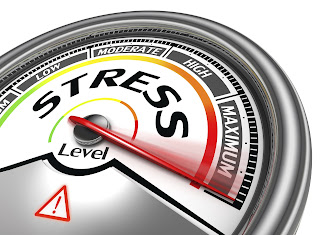 The last few weeks have been stressful.  Actually, based on how I've felt the last few days, they have felt extremely stressful.  There is nothing "big bad" going on, but lots of small stress causers, and they pile up until I feel like I do now.

I think that's the case with a lot of parents like myself.  We live with a base level of stress, most all the time.  When small things get added on, and on and on, it doesn't take much to put us over the top.  The funny thing is, when things are REALLY bad, something kicks in---adrenaline or a hidden reserve or something.  It's still very hard, but more a sadness or anger or worried hard.  Stress, for me anyway, is like the workaday version of those.  It can be just as tough to deal with, or tougher, without being as headline worthy.

What is stressing me, you ask?  Or even if you don't, I'll tell you.  Let's start with the last 10 minutes, after Janey got off the bus but before she started watching a Christmas Madagascar special and kicked me out of the room....

I sit out in the 95 degree heat, waiting for the afternoon bus home from summer school.  It comes at highly various times, due to highly various Boston traffic, so I wind up often waiting for it a while.  When it does come, Janey gets off the bus and within a minute, turns off both air conditioners.  She hates AC.  It is sticky hot in a way that Boston sometimes gets, an unbearable way.  I suggest she uses the potty instead of the bed.  This displeases her, and she starts screaming.  I take a deep breath and try to calm down, and offer her some chips if she will try the potty.  She calls my bluff by going to where I've hidden the chips, easily finding them and opening both bags.  And then rejecting them.  As I go to clip one bag shut, she somehow hides the other open bag.  As I search for it, she screams hysterically as I have not instantly put on the TV show she asked for at least 10 seconds before.  I stop the hunt, find the show, clip the chips and sit down to write this.

Now an update, 15 minutes later.  After I wrote what comes before this point, Janey changed her mind about a show.  I went over to put on the new show she asked for.  But that was not really the show she wanted.  I was supposed to know that, somehow.  So she screamed a while longer.  I figured out the right show, and she pushed me out of the room again.  I sat down to write and have some of my coffee.  Janey came over to turn off the AC I'd turned back on.  I turned to talk to her, and knocked over all my coffee.  Naturally, it didn't just go on the floor, but instead on Janey's special pillowcase, the one non-human object in the world she cares for, which she obsessively takes off the pillow and puts down various places.  I tried to sneak the pillowcase into the hamper, but she noticed and got extremely upset.  Somehow it having coffee on it made it necessary in her eyes for me to make more coffee.  She pushed me over to the coffeemaker and screamed until I started some.  I started it, and then snuck back over here.

None of this is huge stuff, but in the half hour since she's been home, it's a lot.  And that has been this week.  Getting on the bus in the morning is the worst.  The bus comes to get her any time in a 30 minute range.  Today it was there at the earliest time, yesterday at the latest time.  If we aren't out there when it comes, they do honk, but they have a lot of kids to pick up and can't wait long.  So...we have to go out to wait for it at the earliest time.  Janey tolerates 5 minutes or so of waiting, but then she wants back in the house.  And screams because she can't go back in.  If the boys are available, I have them stay inside with her, but even then, if they look away for a minute, she takes off her shoes, and otherwise makes herself unpresentable for school.  Generally, they aren't available (Freddy works until late and William is currently visiting my parents), so that isn't even an option.  I just have to figure out how to keep Janey from freaking out in the heat while we wait.  Again, not a huge thing, but it's making me a little crazy.

Sometimes, I am up to dealing with stress.  Lately, I'm not.  It's the heat, partly, and my health partly.  I don't get into health details much here, not to be mysterious, just not to overshare, but there are currently four different diagnoses I carry, each of which has among the top 2 symptoms "extreme fatigue"  And I am feeling that extreme fatigue lately.  I am feeling every second of my 51 years.  Having a child that needs full time care, who is not capable of self-care and will not ever be, most likely...it's tiring.  And stressful.

The woman in the picture is how I feel like I'm supposed to be.  It's my ideal, one that reality doesn't modify much.  I should be calm always, working on solutions instead of complaining, feeling grateful Janey goes to summer school instead of wishing it was for longer, cheerfully doing the housework while she is there instead of grudgingly doing it and wishing I was just sleeping instead...yeah.  I should be making up a nice chocolate cake instead of writing right now.

This is mainly just a rant. There aren't solutions.  And I'm certainly not alone.  I know you, out there in the wider autism nation, are right here with me in Stress Village.  And most importantly, I know Janey is stressed too.  And like me, she is doing the best she can.  So, we'll keep on keeping on.  55 minutes until Tony gets home.  Not that I'm counting.

Hang in there you are doing great.

The turning off the AC thing I couldn't do. I would have to scream right back at her until it was left on. That alone makes me want to hug you.