This weekend, we spent a lot of time organizing our bedroom, to prepare for a badly needed new mattress.  Some of the work involved heavy lifting and cleaning, so we decided I would get Janey out of the house so Tony could do the work without Janey needing Daddy's attention 100% as she usually does on weekends.  I took her various places, one of which was a McDonalds.  During the meal there, I kept flashing back to another trip to that same McDonalds.

Here's a blog entry about that long ago trip, when Janey was four.  (LINK)  It's a trip that has stayed in my mind for all those years because it seemed like a dividing line.  Before that trip, I often took Janey out and about.  I ever said in the entry "Usually she loves to shop", which surprises me a bit now to read, but I vaguely remember as true.  Janey did, when she was very little, like to go shopping and to be out and about.  We often went to McDonalds and ate inside.  But that day, she had a violent reaction to something, and for one of the first times, tried to bite me, and succeeded in biting her own lip and the back of the chair.

After that trip, I didn't take Janey out much on my own ever again.  It wasn't safe.  We did a trip here and there, but overall, I just didn't.

Now, eight and a half years later, I do again.  Finally again I feel safe taking her places.  I have enough confidence in her ability to stay calm and my own ability to calm her if she doesn't stay calm that we are going places, fast food places and short trips to stores and yesterday, swimming at a Y for summer autism free swim.  The trip back to the McDonalds was smooth (besides them giving me a burger instead of grilled chicken in my sandwich and me just eating it rather than trying Janey's patience by returning it). 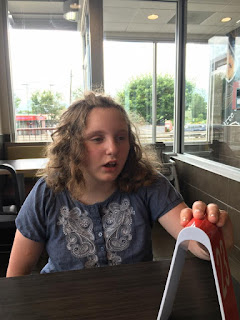 However, the trip also highlighted to me another change.  Janey is not talking much lately.  Her calmer behavior seemed pared with less activity overall.  During the meal, she said exactly one thing, an echoed "23" when I commented that the number of the marker we had on our table was 23.  She ate in silence, despite my best trials.

When I read back about the long ago trip, it is hard in some ways to read what she said long ago after the trip----"I heard a clicking sound, and the clicking sounded like BOOM! I heard a footprints sound"  All these years later, a sentence like that is basically unheard of.  It's quite hard often to realize that despite many, many years of speech therapy, ABA and schooling and just getting older, Janey talks substantially both less and less complexly than she did soon after her diagnosis, even during periods of more talking than we are in right now.

I don't think the two are connected.  I don't think talking less and being calmer go together by necessity.  At least, that's not supposed to be the plan.  It's supposed to be that talking, communication, can make Janey calmer---that if she can tell us what is bothering her, we can help.  But back then, she told me that long sentence that I thought was about what was making her upset, and it didn't help a bit.

Another thought that has crossed my mind---maybe Janey talks less now because we have learned more about her.  Maybe she doesn't talk when she doesn't feel she has to.  She isn't into talking just to chatter---she talks when she has something to say, and maybe by understanding more of what she needs, she doesn't need to tell us.  Is that good or bad?  Again, I really don't know.

Whatever the reasons, the reflection on the two widely separated trips to McDonalds has left me with more questions than answers.
Posted by Suzanne at 2:41 PM