The hat, Chipotle and the moon

I think often that if I could learn to communicate with Janey more easily, if I could teach her to be able to let us know what she is thinking and what she is feeling, so many of the other tough areas of our lives with her would fall into place.  It's frustrating while at the same time fascinating trying to understand how communication works with Janey---what she understands and doesn't, how she pulls up words or not, how to figure out what she is feeling.  Over the past few days, I noted three incidents that illustrate this.

On Friday, Freddy, Tony and I were talking about where we were going to go to lunch.  We had plans to go to the Target, as Janey was finally well enough for a little trip out of the house.  The Target we go to have quite a few quick food places around it, and we were tossing around ideas---Noodles?  Chipotle?  Smashburger?  It's the kind of conversation we all enjoy, as we like to talk about eating almost as much as we like to eat. Suddenly, Janey burst in with a phrase we didn't understand at first.  We asked her to repeat what she said, which doesn't always work, but it did this time---she repeated "Want to go to Chipotle?  Chipotle, please, Chipotle!"

It's not so much surprising that she wanted Chipotle---she is hugely drawn to the place, just like her brothers, although I am not as huge a fan, especially after their recent woes.  And the way she asked is just how she usually phrases requests---first as a question, and then repeating the word twice, with "please" in between.  But what surprised me was that she was following the conversation at all.  We weren't talking to her, just talking back and forth, and often, it seems like she's paying no attention.  But she is.  I wonder if she hears keywords she knows, or if she is following the whole train of thought.  Whatever it was, we did go to Chipotle.  It was great getting her input.

It snowed a bit on Sunday night, and yesterday morning Janey wanted to go outside in the snow.  I had to bundle her up a lot first.  As I did so, I kept up a prattling talk, as I often do.  It seems to usually keep her calm.  I said things like "Okay, now we need a coat.  Let's put on your coat!  We better put some gloves on, to stay warm.  Now here's a scarf.  Let's put your hat on.  I better adjust it.  It's on funny.  Let me fix it..." and right at that point, Janey reached out and hit me in the face, screaming. 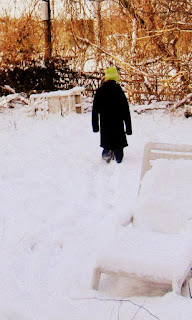 What ties this into communication is that right then, I myself was thinking "Jeez, do I sound annoying.  I would have hated listening to all this when I was 11.  I'd be thinking 'Can't you just shut up, Mama?'"  Of course, I don't know if that is what Janey was thinking, but I think it was.  She wanted to go outside, and she is sick of the preparations and hearing me talk about them.  Of course, that's not in any way, shape or form how I want her to communicate, and we let her know that, firmly.  But it made me think about how frustrating it must be to have the normal annoyance at parents and have no way to express that.  Once we had all calmed down, I tried to give her some words for it, in case.  I said "you can tell me 'Mama, you are driving me crazy!'  You can say 'Mama, you are being very annoying!'"  I realize when I give her phrases to say, I leave out ones like that, usually, and they might be helpful ones for her to have, as I'd rather be told I was annoying than to be hit in the face. 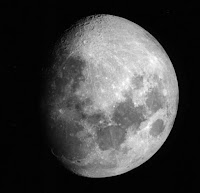 Last night, Janey slept very poorly.  At 2 am, I gave in and gave her a shower, as she'd been asking for for a while.  When we got into the bathroom, out the window I saw a three-quarter moon, low in the sky and looking huge.  I'm not usually up at that hour when the moon is that phase.  It looked amazing.  I said to Janey "Look out there!  What do you see?"  She was in a great mood, because she was getting what she wanted, and she answered back in glee "It's a planet!"

I was blown away.  I've never heard her use the word planet, and to hear her use it in the correct way (of course, it wasn't a planet, but it was something big in the sky, and it looked different than the moon usually looks, so that was the next guess!) was amazing.  It was one of those moments that make me realize there is so much in Janey's head that is so very hard to access, but that is there.  How can I help her use her knowledge of things like planets?  How can I unlock those words so she can use them not as one-off surprises, but in regular life?  I just don't know.  Communication is the key to helping Janey, and it's also our eternal struggle with her.
Posted by Suzanne at 9:39 AM

Janey's mind is a mystery, that's for sure! But I, like you, would love to unlock its secrets! Wow.

Love the new picture! I am sure you have heard this before but I just wanted to ask if you have looked into RPM? I know you said Janey is not a fan of PECS or ipad or talkers, so this is probably in that same class as far as her receptiveness. I know you want to find the key to all the knowledge she is soaking up like a sponge.
Keep trying! (sorry if I sound like all well-meaning people who make suggestions and don't know what they are talking about. I still want to work with Janey with music.)