Being Janey's voice, without apologies

Usually, I deal with viral type controversies about autism issues by ignoring them.  I've always felt that you can't get insulted by things you don't read or hear about, so I usually avoid reading a lot online about autism and autism parenting, which is kind of ironic seeing as I write a blog about those very issues.  But I think of this blog as being more about Janey, a specific girl with autism, than about autism in general.  I love it when it's helpful to others, and I love extremely much hearing from other mothers, but I don't try to speak for the community.  I couldn't do that.

However, I do try to speak for Janey, and I've been surprised that lately, that seems controversial.  It seems like it started with a post on a blog called The Mighty, which (like most special needs blogs except those of friends!) I haven't read.  Someone posted something called "Meltdown Bingo".  It wasn't in the best of taste, and if I had seen it, I think I would have not liked it that much, but then would have moved on.  It takes a lot of energy to get outraged, so I save it for extreme things.  But it seemed to open up a big debate, in which a lot of people said things like "nothing about us without us", meaning nobody should write about autism unless they are the person with autism.

I want to say here---if I've ever insulted anyone with autism by writing about Janey, it was absolutely never my intention.  I would hate to think that I had.  But with that being said, I don't agree that I shouldn't write about her.  I'm pretty sure not everyone with autism would agree I shouldn't write about her, either.  People with autism don't speak as a group.  Some of them, like Janey, can't really speak for themselves at all.  And that is why, of course, I try to speak for her.

It is so confusing to me why someone would say that if Janey can't write a blog herself, she shouldn't be written about.  That just seems---well, mean.  Does that mean that nothing should ever be written except in the first person?  Does it mean that everyone in the world who can't write should never be written about?  Or is this just some special case for autism?  If so, why just autism?  Would it be okay to write about Janey if she had some other issue?  I'm asking these questions theoretically, of course, as I figure if you are reading this blog, you are probably okay with me writing about Janey, but I really do wonder what the reasoning is.

Janey can talk a little.  She can't read, or write, or generally speak in complete sentences.  She is very developmentally delayed---probably functioning at about a two year old level in most ways.  Barring miracles, she will never write a blog.  She will never give speeches, she will never write a book, she will never self-advocate.  But her life is valuable, and her experiences are meaningful.  I share them in many ways because she can't.  I don't write about my sons very much.  They are completely capable of writing about themselves if they want to, and I fully agree that I shouldn't write about them.  But Janey? That is very, very different. 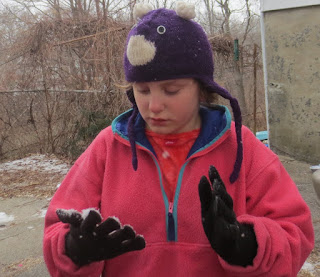 I wonder sometimes if the reason people don't want parents to speak for their kids like Janey with autism is because Janey is not the face of autism that many want put forward.  She is not an inspiring story in a traditional way.  She doesn't have special abilities, she has not responded to assisted communication, she is not making progress in any significant way academically.  But she is a face of autism, just as much as the college graduates with autism or the kids with autism who use letterboards to write books.  She is unique, fascinating, beautiful, interesting---she is a person worth knowing despite how hugely challenging her behaviors and limitations are to us and I'm sure even more to her.  I will be her voice as long as I am able.  She's worth it.
Posted by Suzanne at 2:31 PM

I think you've done so much to help those of us who don't have a child on the spectrum gain at least a little understanding of what those children, and their parents, go through. I really love your blog. It's one of the few I follow, Thank you so much for your perceptive, well-written posts.

Thank you for being Janey's voice for those of us who have no idea what people on her end of the spectrum, and her family/friends/caregivers, experience on a daily basis. We could never understand that, and Janey could never write it to help us understand.

I appreciate this blog a lot. I've only just started reading it but my daughter Emmy is three and just got diagnosed. While I know all cases are different and your daughter is much older, I hope to be able to learn about what to expect and how to handle different situations. I just read your post about the beach. Emmy had a rough time at the beach this summer, this was before we knew she had autism. It made me realize that we are going to have to prepare her for going to the beach next summer and maybe try some experimenting to see how we can make her comfortable there before we go. I think it will also be helpful to a new parent of an autistic child to read about your struggles and how you emotionally cope with your experiences. Keep on writing and I'll keep on reading and our girls will keep on living better lives.

Reposted- The last one had too many errors.

The people saying that you can't speak for those with autism because you don't have autism yourself are too militant for my taste. They ignore that not everyone can speak for themselves. Surely this the case for normal young kids (I hate the NT label because it sounds like ET to me) who cannot speak for themselves because they lack the speech and reasoning skills. We make all important decisions for our kids because minors are not regarded as mature enough to make those calls.

My daughter can't speak beyond simple sentences and can't answer direct answers much of the time. She never answers a "why" questions. She can't tell you how she feels and she always answers "happy" even if she's crying. I feel like a translator for my kid.