Tougher, the same as and better

Janey will be 11 soon, and I've been reflecting on what 11 is like for typical kids, what 11 was like for me.  It's not the easiest age for any girl, I don't think.  It's typically the start of middle school years, around the start of puberty and of girl on girl meanness and on starting to notice boys, the age of questioning your parents and figuring out who you are.  I think a lot about ways that life with Janey is, all at the same time, tougher and the same as and better than with most almost 11 girls.

The tougher part is quite obvious, of course.  It's a lot of what I write about.  It's tough to have a girl her age who isn't usefully toilet-trained, who is minimally verbal, who has no academic skills, who screams and bites herself when she's upset.  It's terrifying, as we found out, to have a child who can't tell you the most basic things that are wrong physically---who can have a burst appendix for days that even doctors at a top notch hospital can't easily detect.  It's sad to not ever really know what Janey's life at school is like.  It's very hard that she doesn't have friends.  It's heartbreaking that her future is not going to include marriage or a career or children.  All that is, putting it mildly, tough. 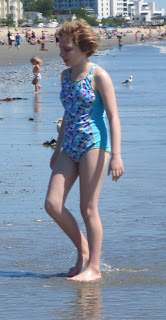 Some parts of Janey at this age are really not that different than having any almost 11 girl.  That hit me this past weekend at the beach.  Janey loves the beach, and she ran in and out of the waves and picked up shells and just had fun in a way that was truly not that different than anyone else her age.  Of course we had to keep an eye on her, but we would be keeping an eye on a typical girl that age in a public place.  Her enjoyment of the beach was not because of her autism, or despite her autism---it was just enjoyment.  When we all sit down to eat Chinese food or pizza, she is no different than any sister in a three kid family.  She grabs her share and we all gobble down.  There are moments when I look at the three kids in the back of the car and think "There's my family!" and don't think for a minute about the autism.  That might not seem like a big deal to most people, but it's a wonderful kind of ordinariness to me.

And there are the parts of Janey at this age that are better than what I think life would be like with a typical almost 11.  Yesterday after school, I put on some Beatles while I did dishes.  Janey was in the kitchen with me, and she delighted in the music.  She delighted to such an extent that she was truly in a state of bliss.  We listened together to "In My Life" 5 times, as she kept hitting repeat, and as tears came to my eyes, she hugged me over and over.  Then we danced to "Birthday", the theme song of her shared birthday with Freddy.  I thought about this birthday to come, when my baby will be 11 and her brother Fred will be a legal adult, 18.  I thought of the moments of joy with Janey, and how she will in some ways always be my sweet little girl.  The joy with Janey is pure and overwhelming when it happens.  Those are the moments that keep us going.
Posted by Suzanne at 10:25 AM