Janey is at camp!

I haven't written at all here until now about Janey going to camp.  I think that was because I feared a jinx, or thought I still might decide not to send her at the last moment, or something else would happen to have it all fall through.  But she is there now!

The camp is called Camp Fatima.  It's in New Hampshire.  They have a week every year called Exceptional Citizens week, and during that week, they accept campers with all types of disabilities, campers that would not be able to go to most any other camp.  Here's a website about the camp.  It is run by the Catholic Church, but you don't have to be Catholic to go (we are not).  From everything I've heard, it's an amazing, amazing place.  It's totally run by volunteers, many who come back year after year after year, and each camper has a counselor assigned just to them.  There is boating, swimming, horseback riding, archery, tennis, arts and crafts and more.  Every year the week has a theme, and this year it's "The Sound of Music", which was made for Janey!  They perform a little bit of the musical every night at dinner. The camp is totally free, payed for by donations.  I heard about the camp years ago, from teachers and therapists at Janey's old school, many of whom volunteer there.  They encouraged me very much to apply, although I was hesitant, but I finally did.

Taking Janey up today was a bit of a mixed bag!  Yesterday was her birthday, which was also a mixed bag.  She did very well in the morning, but the excitement got to her by the afternoon (it's also her brother's birthday, and although I try hard to keep it low key, she almost always has a hard time with it).  She was AWFUL in the afternoon---biting and screaming and just completely wild.  But by evening, she was happier, and she woke up in a lovely mood.  The ride to camp (about 2 hours) went well!  She was cheerful almost the whole way.  We took both boys, and that helps, as she likes being around her brothers.

When we got to camp, it was a chaotic scene at first, as a check-in like that always is!  We had to wait in a line in the car a bit, and then went to wait to hand in Janey's medication.  Janey started to lose it, completely.  She started screaming and biting herself, and actually did bite me.  At that point I was talking to a camp worker I thought was a check-in person, who was wonderfully calm about how Janey was acting, as was almost everyone!  People were clapping and yelling "Welcome to camp!" and acting like she was perfectly normal.  That was great.  I had Tony wait in the line for us, and we went over to her cabin, and showed her her bunk (the counselor sleeps right above her!) and I figured out that the woman I was talking to, Dawn, was actually Janey's counselor!  That was GREAT news, as she is a teacher in an autism classroom and has worked with autistic kids her whole career!  It's amazing to me that she takes a whole week a year to volunteer at the camp.  I told her that what she had just seen was about as bad as it gets with Janey, and it's usually a lot better than that, and indeed, Janey had already calmed down.  She liked seeing her bunk and cabin, she had some juice, and we went outside.  The picture is Janey with her cabin in the background. 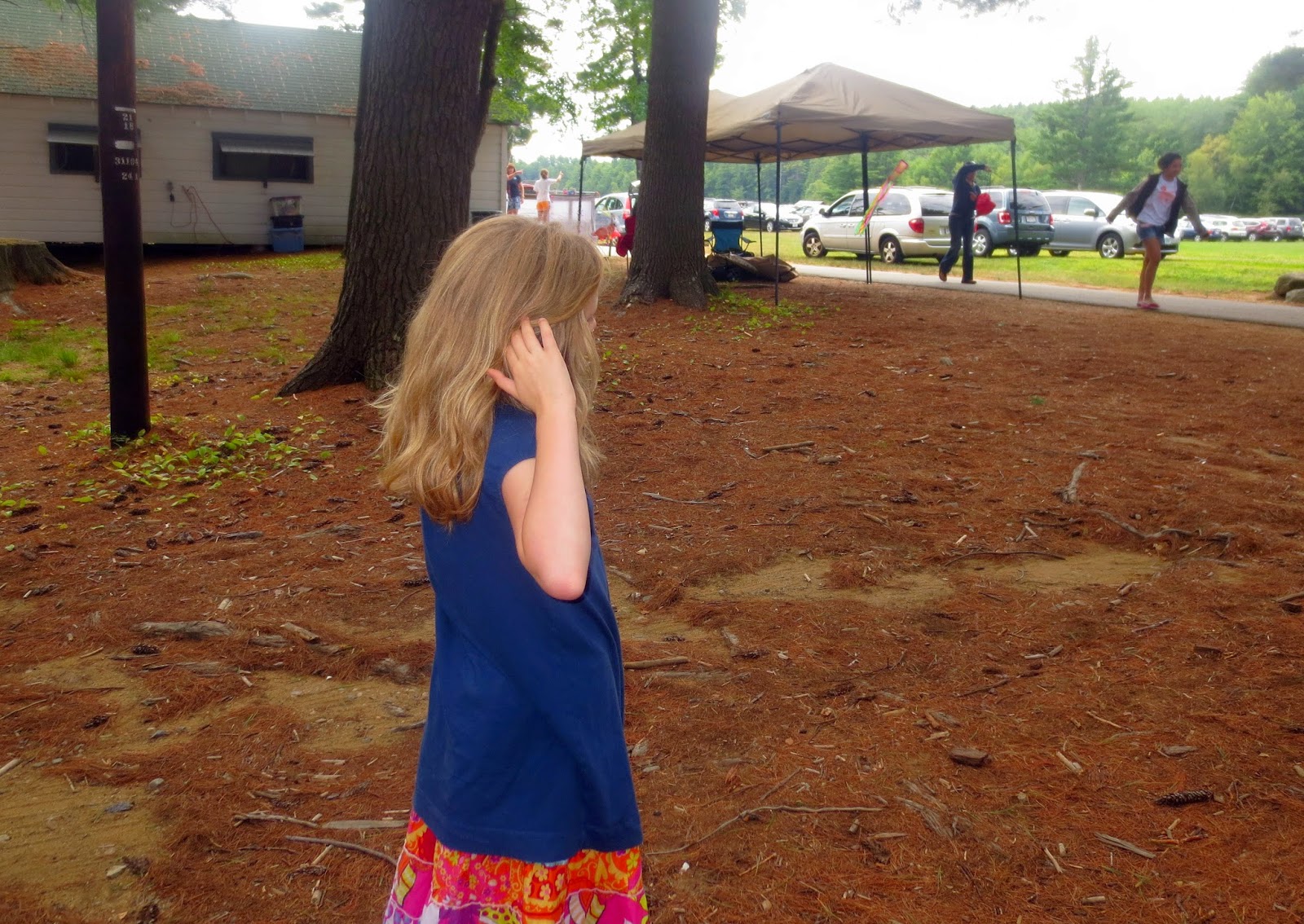 I loved the questions Dawn asked---all the things that are necessary to know about Janey!  She said they pretty much have the kids do the activities they want, so if Janey likes the boats, she can spend a lot of time on the boats!  She said she will call for sure if things get out of control, but she doesn't see that happening.

We left after not that long!  It's always better with Janey to go while the going is good, and she doesn't like transitions, so we knew she'd not want us hanging around!  She happily high-fived us all goodbye and let Tony and me kiss her, and we were on our way.  We pick her up Saturday morning.

Now---almost a week to fill!  I miss her already, but I have to admit---it's going to be incredible in a lot of ways to have a week of respite.  We have NEVER had anything CLOSE to that.  We've never been away from Janey for more than one night together (once only for the one night, even!) and to have 6 nights---we aren't going to know what to do with ourselves!  On the way home, we all found ourselves getting tense when things happened that would upset Janey---bad traffic, loud noises, music stopping---it was very hard to picture that she just wasn't with us.  We stopped at a restaurant even though we weren't that hungry, just because we could!  Tony has the week off, and we plan a few day trips and maybe one night in a hotel in the city with the boys.

I am of course going to be nervous all week, waiting for a call to say that we need to come get Janey, but the truth is, it wouldn't matter where in the world she was, I would still feel that way.  I think she's in one of the best possible places she could be, and I am extremely, extremely grateful to the camp, to Dawn, and to all the people that encouraged me so much to apply!
Posted by Suzanne at 4:00 PM

I think Janey will do great, and I'm sure you'll find plenty to fill your time with! Enjoy it, and don't feel bad about enjoying it, either.

That sounds like a great camp! I like that they let the kids spend more time on the things that they enjoy the most, instead of trying to make them follow a schedule and participate in everything just for the sake of participating. Its camp... if a kid loves swimming, let him swim!