Janey and I spent the last five days in Maine, where I am from.  We stayed with my parents.  I wanted very much to visit Maine for a little longer than my usual 2 or 3 day trip this summer, and I wanted Janey to get try some of the things that made summer special for me growing up.  So I decided to give it a try, just the two of us.  William is off to college and Freddy and Tony had to work.

How did it go?  Well----it was a mixed bag.  My parents did what they could to help, and I was glad Janey had time with them.  We did a lot of things---we went to a fair with lots of animals, we visited Pemaquid Point, which is a rocky seashore, my dear friend took us to have her mother meet Janey and to her camp, where Janey got to sit on a boat, as well as to an alpaca farm, and Janey got to run around outside a lot.  I put pictures on my Facebook page, and here is one of Janey on the rocks---I loved seeing her play on them, as that is what I did all summer long growing up.  But...it was tough.  Janey slept very, very poorly up there.  It was quiet, we had a nice bed in my parents' travel trailer, our own little place, she got plenty of exercise, but she didn't sleep.  And when she got overwhelmed, she screamed. 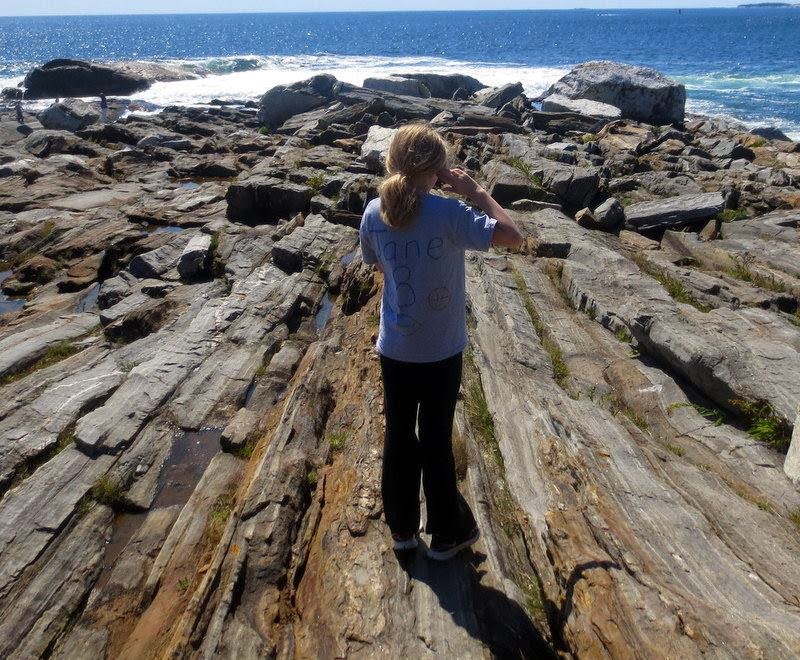 The sleep was so tough.  My parents watched Janey in the afternoons so I could have a nap, but nothing really makes up for a night with only 2 or 3 hours sleep.  I don't get to sleep quickly, especially when I am thinking I'm going to be awakened, so once I did go to bed, I lay there for a while, finally drifted off, and it would feel like a few moments rest and BAM---Janey was awake.  One night I tried waiting a while when she started crying to go to her, and she said in a very sad voice "I sprang to my feet to see what was the matter!" a quote from The Night Before Christmas and a pointed jab at me and what I was supposed to do when she woke up.  Generally, she was cheerful in the night, but not sleepy.  She walked around, recited things, poked me and just plain stayed up, usually from 2 am on.  My husband Tony and I trade off night duties at home, and Janey usually sleeps better than that.  She was in a place she wasn't used to, she didn't have Daddy around or familiar things to comfort her when she woke up---I can understand the not sleeping.  But I felt like a zombie in the daytime.

And the screaming...The screaming hasn't been as bad as it used to be most of this summer.  It's been a good summer.  And a lot of the time in Maine, Janey was fairly happy.  But when she broke down, it was badly.  At one point, when my parents were letting me nap and my father was taking a walk down their dirt road with Janey, she woke me up with her screaming, from quite a bit down the road and through the walls of the camper I was sleeping in.  I worried the neighbors, who don't know Janey, would think something horrible was going on.  My father did his level best with her, but when she is like that, it's almost impossible to calm her.  I went and got her and lay down with her, and finally, she calmed.  For a bit.  There were a few other incidents like this, always it seemed right at a time when I desperately wanted her to be happy, like when she met my friend's mother.

I'm glad I took the trip.  It was a big deal to me to be able to do it.  I have never taken Janey away from home for even one night on my own, and she has never stayed at anyone's house for more than a night.  Her having such success at camp gave me the courage to try it.  It was real life, not a camp where everything is geared people with special needs, and I need to keep that in mind.  She did the best she could, and we made it home in one piece, and she got to experience a lot of things she wouldn't have otherwise, and we both got time with my parents.  I'm going to catch up on my sleep the next few days, thanks to a rested Tony.  And school starts Thursday.  Or, as I should put it SCHOOL STARTS THURSDAY!!!!!
Posted by Suzanne at 8:25 PM

Look at it this way: You tried it out, and you both survived. Sure, I wasn't there, but it certainly sounds to me like it was mostly a success. "I came, I saw, I conquered," right? :)

I'm glad for you that school starts Thursday, as the stability will be a welcome thing for everyone! I hope this school year will be a good one for Janey and for all of you!

I'm glad, too (that you took the trip). Pleasant dreams!