Today was a year-end show at Janey's new school.  I've been to many, many shows at her old school, but this was the first one at her new school.  I was nervous, which is crazy, as not a lot is demanded of a parent at a school show but to sit there and clap.  Still, I was.  I wasn't sure exactly where in the building the show was (it's a BIG school), I kept worrying I had the date or time wrong and I kept thinking how I didn't know anyone there.  However, I knew those were fairly silly things to think about, and of course I made myself go, and I found the auditorium just fine, and got there at the right time and date, and sat down to watch.

The show was like most elementary school shows---lots of cute kids dancing and singing along to catchy songs.  Janey's old school was exceptional for shows---amazing, really, but I know that isn't the norm.  This show was sweet, and that wasn't why I spent half of it trying not to cry.

The reason for the crying?  I think it was when it really hit me.  Janey doesn't go to the Henderson School any more. She really doesn't.  And that made me sad.  And that was self-pity.  I was feeling self-pity because I liked going to the old school, seeing old friends, knowing most everyone, feeling like a part of it.  For someone like me, with what I'd have to admit is a dose of social anxiety at times, leaving a place I've come to feel at home at is not at all easy.

But for Janey?  The new school is great.  I was able to watch her teachers interact with her, and saw how much loving and caring attention she got.  I saw how adorably they dressed her up for the princess song she was in.  I talked to her teacher after the show, and she was wonderful.  Janey got upset near the end of the show, and her ABA therapist, another wonderful person, took her out. Janey looks happy at the school.  She is doing well.  She is still among the lower-functioning kids, even in a class with all autistic kids.  I could see that she needed much more supervision than the other children, and that on stage, she had someone right next to her, which was not the case with the other kids.  In many ways, it's like at her old school in terms of the level of support she needs, and I guess that shouldn't surprise me.  But now she is in an environment designed for kids with autism, and that is good.

On the way out, I saw Janey's old ABA therapist, Ken.  It was so great to see him, and to hear him say how very much he thinks we made the right decision about schools.  He knows both schools, and he said there is no doubt in his mind that Janey is in the right place.  That meant the world to me.  I know he would be honest to me if he didn't think so.  Seeing him also made me realize that I DO know a few people at the new school, and I will know more as times goes by.

I've been so lucky with Janey to have had so many people work with her that love her, that take good care of her, that understand her.  Seeing her today, even during my self-pity moments, sitting with her new teacher, smiling and happy and cared for, was a very good feeling.  I'll close with a picture of her in her adorable costume! 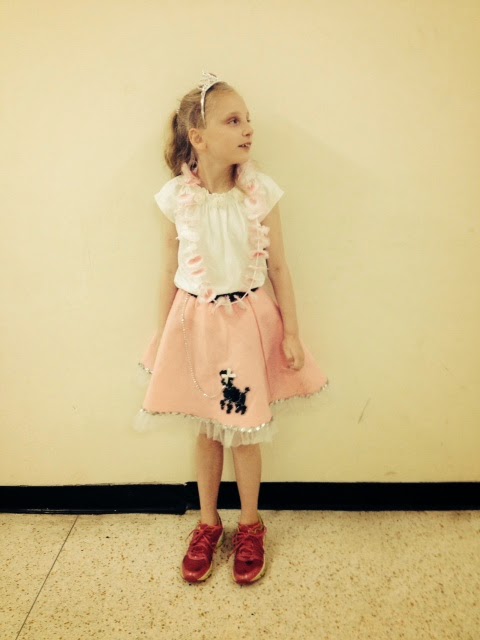