For those of you not familiar with it, Bunker Hill Day is a weird Boston only holiday, in honor of the Battle of Bunker Hill.  Not to dis any Revolutionary War battles, but I can't stand it.  It happens right near the end of the school year, when you are saying to yourself "Only a few days left of school!  I'll take full advantage of them!" and then all of a sudden, you realize one of those days you were counting on is actually a day off.  That was today.

Janey doesn't like days off that come in the middle of the week.  I think they confuse her.  She can tolerate them if Daddy is home, but Daddy was at work.  So it was a long day.  It did, however, follow the recent pattern of very rapidly cycling ups and downs.

I had planned to go to a local pond as soon as we were up and dressed, but Janey was quite content at that point to watch YouTube videos, so I changed plans and let her do that while I had my coffee.  Then Freddy kindly watched her for a bit while I read a little.  Then she freaked out and screamed for a while.  I calmed her down by taking her outside.  We had a pretty good hour or so outside.  I pulled out her big bucket of water toys, filled the bucket with water and let her play.  She loves water.  I would have stayed outside all day, but eventually Janey wanted to go in.  She was then at loose ends.  I tried reading to her, drawing with her, singing with her---none of those interested her.  It's so, so hard to find something she likes to do on a day without real plans. 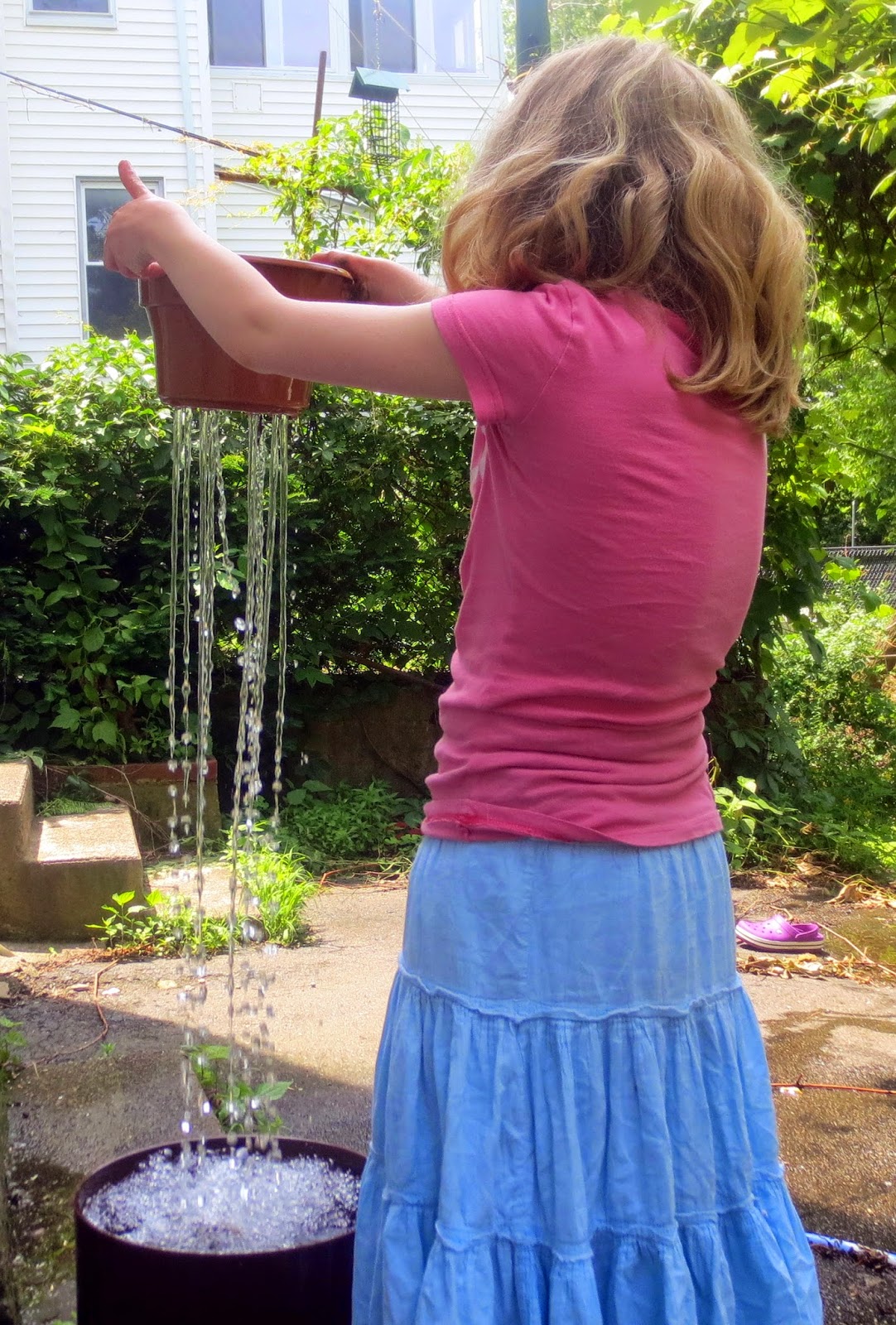 Finally, it was time to take William to work.  The car ride felt like a treat.  Janey was calm, and I was able to not feel like I had to figure out how to entertain her.  After we dropped off William, I decided to go to ToysRUs.  I've done that a few times with Janey, with varying success.  She really doesn't get it it's a store.  For her, it's kind of a museum of toys.  I like going there with just her, and letting her take all the time she wants to look at whatever she wants.  Today, it was the Disney Princess aisle (yet another in a long list of things I didn't want a daughter to like, but at this point, if Janey is interested in something, I just go with it).  Janey looked at all the different Ariels, her favorite princess.  She didn't say much of anything, but at one point she smiled a huge smile and hugged me, which I took as a sign of her enjoyment.  Eventually I got her to look at a few other things, and she actually picked up a toy---a LaLaLoopy little pony with rubber band type hair.  She carried it around the whole rest of the time we were there, which is hugely rare for her.  We stayed about an hour, just looking at a few aisles.  Then a baby cried.  Janey cries plenty herself, but she has a bit of a double standard about it---nobody else can cry.  She screamed in displeasure, her hugely loud ear-breaking scream, and I decided it was time to go.  I was going to just put down the pony and make a run for it, but I asked her if she wanted to buy it, and she gave me one of her very rare direct answers---"YES!" So I did.

At home, for the next few hours before the magical moment when Tony gets home, Janey alternated between screaming her lungs off and being happy.  No real rhyme or reason I could see was involved.  Finally Freddy and I decided to watch a Star Trek episode, and put it up loud, as we have to when watching anything.  That actually calmed her down, and when Tony got home, things were pretty mellow.

So why did I write all about this somewhat mundane day?  Because it's illustrative of life with Janey.  It's very hard to engage her.  When I can, like with the water toys or the ToysRUs, I am so happy, and so is she.  But other times, I could try everything in my bag of tricks and the result would only be screaming.  I long for lazy summer days where we go to parks and museums and take trips into the city and read books.  But that is not really a realistic plan with Janey.  She is going to go to summer school for a month, something I truly didn't want to do this summer, but today reminds me that the kind of summer I daydream about just doesn't really work with Janey.  Or it does, for short spells, short spells that are completely unpredictable.  And so, tomorrow, back to school.  I am not the mother I pictured myself being, but I guess it's fair to say Janey isn't the child I pictured having, and we both are doing the best we can, most of the time.