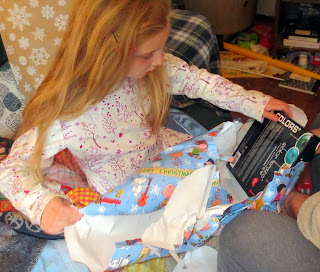 Christmas has come and gone, and overall, it was a good one.  I was very tense about Christmas this year, as I guess in some ways I always am, but it seemed like more this year.  However, I used a "fake it until you make it" method (a phrase a friend told me that I very much like) and kept plugging away at Christmas stuff, and when the day came, it all seemed to work. 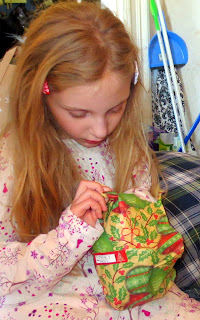 As you can see from the pictures, Janey actually opened two presents, and looked at what was in them.  That was huge for me.  She wasn't that excited, but she did seem to get the process, and was pleased with her nail polish and her plush Sesame Street count---the presents shown here. 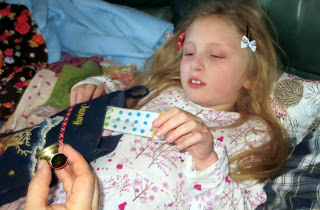 You can see she wasn't too into her stocking, but she did take a few things out of it and looked at them briefly! 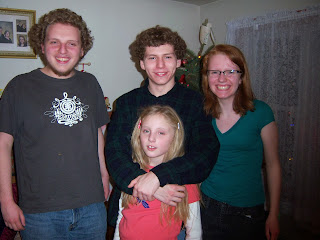 I think the best part of Christmas with Janey this year was Christmas Eve.  As we almost always do, we went to the house of a family friend.  The picture above is our traditional picture of our kids and the friends' daughter, in front of the tree.  This year, it was going to be a little bit bigger crowd than usual, and we weren't sure how Janey would do.  She did quite well!  She did something she sometimes does when there's a lot of people---she surveyed the crowd and found someone she liked the looks of, and sat on their lap.  In this case, it was the girlfriend of our friends' son, and the girlfriend's mother, people she had never met before.  They were wonderful with her and pleased she picked them, I think!  She did well with the two year old boy that was there, the grandson of the friends, which I had been nervous about---Janey can sometimes be aggressive with younger and smaller children, but she mostly ignored him, although at one point, while we all held our breath, she briefly put her arm around him.  There was one screaming incident there, when Tony had taken her out of the room to calm her down.  Tony and I both realized that how he and I handled that screaming made a different.  We stayed calm and acted like it wasn't a big deal.  I said something like "This screaming isn't uncommon.  It's fairly normal for Janey" and I carried on as if it wasn't happening, and that seemed to relax everyone about it.  We've realized, over time, that how we as parents react to things Janey does sets the tone.

The Christmas Eve night and Christmas day made me realize that Janey is making progress.  It's slow, but it's there.  In little, small ways, she is becoming more mature, and we are becoming better at being her parents.  Some days it doesn't feel that way at all, and if you were watching us from outside, you might not see it.  But we are learning all the time, and so is she.  As we look to the New Year, we feel hope---hope mixed of course with fear, with some sadness, with challenges and with acceptance of the life we have been given, but with hope nonetheless.
Posted by Suzanne at 8:23 AM

Suzanne, it sounds like your Christmas went better than you expected. With our kids, progress is usually not linear and steady, it may come a little at a time in fits and starts and may not even be noticeable at times. But it certainly seems that Janey has made progress. Merry Christmas to you and yours!