Trick or Treat or Not?

Halloween was my favorite day of the year growing up.  It seemed just plain magical.  You dressed up, went to people's houses, knocked on the door and they gave you candy.  What holiday in the world could be better than that?  Since we lived in the country, people got around to trick or treat by having parents drive them.  I used to think that the only thing in the world that could make Halloween better is to live in a place with LOTS of houses close by, so you could by walking get to TONS of houses and get tons of candy.  Bringing up my boys in a suburb-like part of Boston, that came true.  I loved every Halloween when they were little enough to go out----here's a picture of them looking extra scary one year! 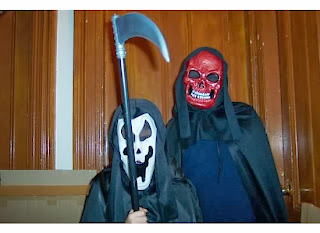 However, with Janey, it was never as straightforward.  She went out with the boys once she was old enough, and I think I can remember her enjoying it when she was 2---excitedly saying "Treat or treat!" to people but not getting the candy part, which was cute.  But then she regressed, and although we still took her out with the boys for a few years, she was not really interested.  She often wound up in the stroller just observing.  Once the boys were big enough to go out with friends instead of us, I would try taking her to a few houses, and usually, she would pretty quickly balk and cry.  Last year, I took her to just one house, and she was not at all happy with that.  And so, this year, I'm not going to try.

I have to admit that it's hard for me to give up on Halloween with her.  It's hard to admit that she really has no idea what it's all about, that she doesn't enjoy it, that trying to get her to participate is much more for me than her.  She doesn't like to dress up, she is scared walking around in the dark, she isn't hugely motivated by candy unless it's just the kind she wants, and she hasn't got the ability to anticipate the fun, which I think is what makes holidays the most exciting as a child.  I remember counting down the days till Halloween every day of October, and when the day actually arrived, it would just seem incredible that it was there.  I'd daydream and daydream about the candy, about trading with my sister, about the way that bag full of treats smelled.  Janey isn't able to do that, I don't think.  She isn't going to feel left out not going out.  So why is it so hard for me?

I think as parents, we feel somehow like we should be completely altruistic.  We like to think we do things like helping Santa or buying birthday presents or making up Easter baskets to make our kids happy.  And we are right, but we also do it because it's fun, because it's a way to step outside everyday life, because we want to relive our childhood a little.  I don't think we are wrong to do things for our own joy some.  Not at all wrong.  That is part of what makes parenting a child with autism a challenge.  Some of the built-in joys of parenting aren't automatically there.  There are other joys, to be sure.  There are alternate joys, and they are real and wonderful.  But I will admit---I wish tonight I was dressing up Janey in a costume.  I wish she had woken up thrilled that the day was finally here.  I wish she was going to be fighting to keep on going to another street, even when she could barely hold all her candy.  I wish we were going to be negotiating over how much she could eat before bed.  I wish all that, and I will admit it.  I wish it for me, selfishly.  I wish it for Janey, as it's a joy she won't get to have.  I am struggling now to think of a way to close that is upbeat, and at the same time saying to myself "Get over it!  It's a minor issue in the larger scheme of things!"  So I'll let that voice of reason close for me.  Happy Halloween.
Posted by Suzanne at 2:39 PM

I would be very thankful if you continue with quality what you are serving right now with your blog...I really enjoyedhttp://www.promptessay.com/
it...and i really appreciate to you for this....its always pleasure to read so....Thanks for sharing!!!))

Very nice post. I just stumbled upon your blog and wanted to say that online-essay-writer.org I’ve truly enjoyed surfing around your blog posts.